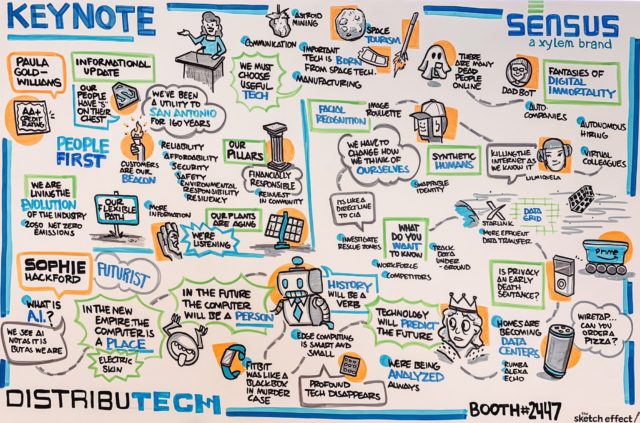 Gold-Williams shared CPS Energy is planning for a more flexible path to reduce its carbon footprint and the role that distributed energy resources (DERs) at scale will play in that strategy.

Gold-Williams spoke of the utility’s reliance on large-scale generation and grid reliability and resilience – a challenge that she believes is going to grow – especially as the level of renewable energy on the grid increases.

“Customers are the voice of what we’re trying to do and the beacon of where we’re trying to go” – @Paula_GW, CEO of @cpsenergy, during her keynote address at #DTECH2020 #Distributexas pic.twitter.com/1JeFeXqslJ

Gold-Williams reminded the audience: “We have to focus first on reliability,” continuing: “Solar’s great — you just have to wrap something around it to make it effective.”

To this end, CPS Energy has formulated Flexible Path – a plan to increase the share of renewables to 50% and be 80% carbon neutral by 2040. The plan is to reach NetZero status by 2050. In addition to the addition of renewable energy resources to the grid, 16% of the energy needed will theoretically come from “flexible generation,” which is a catch-all for technologies which might not be economically viable at the moment.

“This is the slide that got me in trouble.” Thank you for an incredible presentation, @Paula_GW❕ always a pleasure having you @cpsenergy #DTECH2020 pic.twitter.com/cSCll1whR5

The Flexible Path plan will see CPS get half of its energy from wind and solar by 2040. Thirteen per cent would be generated by natural gas, 9% by nuclear and 7% from coal, while battery storage would account for 5%

Futurist Sophie Hackford spoke about the ways that data and artificial intelligence can play a role in the energy future.

SO many fascinating insights from Futurist keynote speaker Sophie Hackford, especially the role space will play in the collection of data and intel 🪐📡 #DTECH2020 pic.twitter.com/zNQZZqA1Z8

Futurist Keynote at #DTECH2020 generated thought provoking considerations for our sector’s future, we must strive to stay relevant in our customers’ minds, consider innovation and ingenuity as our core drivers — @edeson1 #paconsulting, #ingenuity pic.twitter.com/pzPiUjegmQ

Meanwhile, Tom Deitrich, Itron CEO shared some thoughts on the importance of weather resilience during his keynote speech. According to Deitrich, increasing extreme weather events such as hurricanes and wildfires will demand a strong utility response. At the same time, reliability will be challenged by the addition of unconventional loads or asses such as renewable energy and EVs.

Our CEO Tom Deitrich discusses his five predictions for the #futureofenergy at #DTECH2020. If you’re not here, check out our YouTube channel in the next few days to see the recording. pic.twitter.com/RQP8ghXpSQ

He further predicted that there will be a need for “more agile systems for operational improvements and for consumer engagement.” This requirement will be met by an increase in smart meter computing power, communications hubs and distributed endpoints.

The collaboration is an example of how utilities can address key pain points they have all by harnessing their existing Itron network to deliver new insights, predict customer consumption and generate important intelligence about customer energy usage behaviours.

From the Twittersphere: #DTECH2020

If you missed my talk today at @DISTRIBUTECH, listen to this podcast on your flight home. I cover the same ground but in even greater detail! #DTECH2020 @SEPAPower https://t.co/yWr6n7N85U

“The Hitchhikers Guide to the Galaxy” getting a shout-out during Sophie Hackford, Futurist keynote here at #DTECH2020

Some great comments & oneliners on #tech & the #future during the session …

At #DTECH2020 I’m honored @DISTRIBUTECH asked me to give the “#Digitalizing the Grid” Knowledge Hub Luminary Session.

As to what to expect, here’s an example via @BrandingEnergy. Full video at👉 https://t.co/Z7d5QzpLDD

Wed will be fun, plus I’ll have ‘audience’ participation 😉 pic.twitter.com/q7qc5LT1wK

Some fun towards the end of day 1 at #DTECH2020: Wind / coal energy contest at the @fischer_block booth: who can deliver the most wind or coal power operating a robotic crane. @DISTRIBUTECH (just wonder who really wants to deliver coal power…) pic.twitter.com/mBIJzA2xEp

“Solar’s great,” says Paula Gold-Williams, CEO of San Antonio utility CPS Energy. “You just have to wrap something around it to make it effective.” #FutureOfEnergySA #BornHerePoweredHere#DTECH2020 https://t.co/ft4KwArJY0