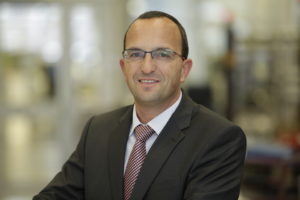 In the run-up to European Utility Week, being held in Amsterdam on 4-6 November 2014, we ask Oliver Iltisberger, executive vice president EMEA at Landis+Gyr, about the challenges of smart metering deployments in Europe.

How will smart metering develop in Europe in the next 10 years?

According to the recent Benchmarking Report by the European Commission, the European Union will achieve 72 per cent coverage of households with smart meters by 2020. We think that is optimistic. We have already seen that rollouts already planned are taking longer and coming with smaller tenders than were originally foreseen.

The UK is beginning with its smart meter rollout and still has 2020 as its target date, but remember, smart metering was first put on the agenda with Gordon Brown’s first Budget Speech in 2007 – just to show you how long these things take.

In France, the Linky Rollout has taken longer than anticipated, and in Germany the cost-benefit-analysis did not advocate an ‘EU-Scenario’, i.e. 80 per cent coverage by 2020, but even so, the legislation to give a legal basis to that rollout was planned for September of this year, but that has also been delayed.

So the first answer to your question would be that development in Europe will be slower than the European Union forecasts.

However, we are still confident that the rollout will come – and perhaps the silver lining in the delays is that the systems being deployed in the coming years in Europe will have more functionality than those deployed earlier.

The second answer is that smart metering developments in Europe will increasingly support the integration of renewables and decentralized generation. This will be the foundation of the smart grid and the prerequisite for any significant Demand Response programs in Europe.

Demand Response is also coming later to Europe than other regions of the world, and will be based on other preconditions. Europe does not have capacity problems in generation or necessarily the network, but must make the maximum use of renewables and micro-generation. Smart Metering will increasingly provide the foundation for the development of the smart grid to meet these challenges.

Is the right legislation in place to develop smart metering in the region?

That is a difficult question. It is hard to find a country where smart metering has been rolled out absent political support – I don’t mean government-financed, but rather a political push behind the rollout to give the national regulatory authority and the utilities a stable legal framework. Political support is therefore essential. This kind of support is evident at the European Union level.

There is no doubt that the European Commission supports smart metering and the development of smart grids. We can expect this support to be reiterated in the Commission’s Retail Market Initiative.

The problems usually lie at the EU Member State level. But even here, we see that more and more Member States are supporting smart metering. According to the EU, 16 Member States have already decided on a full scale rollout by 2020 or earlier. I would be very cautious in asking for additional legislation. The last thing we need right now is regulatory uncertainty.

How does smart metering in Europe compare to the US?

There are significant differences. One is the market design: Europe with a liberalized, unbundled energy market is very complicated. The benefits of smart metering are spread across the value chain, but the costs are usually concentrated in the regulated monopoly that is the Distribution System Operator (DSO). So you have split-incentives: the entity making the investment only enjoys a part of the benefits.

In the US, where you have integrated utilities, for the most part, the situation is more clear-cut. An energy company will invest in smart metering because it will reap the advantages of that investment all along the value chain, from supply to the network to generation. Also in the US, there was the Obama Administration’s Stimulus Package, which put several billions of Dollars into smart metering programs.

In short, Europe is much more complicated – and I haven’t even mentioned the fact that there are 30 individual – with very different market characteristics – countries counting the EU 28 and Switzerland and Norway, whereas in the US, there are 50 States, but all more or less similar.

What obstacles does smart metering face in Europe?

The main obstacle in Europe is financing, or ‘how do you divide the cost pie?’

As I mentioned earlier, the benefits of smart metering are spread out and longer term. The costs, however, are concentrated and shorter term. It requires a wise regulator to know how to distribute these costs between the network operator and the final consumer.

In Switzerland, for example, the government is considering a bill in which the law would specify that the national regulator has to recognize the investment costs made by the DSO, but only for the specified minimum functionalities. Anything above and beyond that, the network operator has to pay out of his own pocket. That seems like a reasonable answer to spreading costs and benefits.

For every country in Europe there is an optimum portfolio of factors that would justify a smart metering investment, and in many cases the regulatory evaluation is done by looking at the benefits not just to the network operator or end consumer, but also to society as a whole.

For those utilities that are just starting to evaluate an investment in smart metering, I recommend that they look beyond just meeting any regulatory requirements. They should take into account that solutions based on a service-oriented architecture and open standards will support innovation and provide more opportunities for future business activities based on the smart grid.

The energy sector faces a major transition with regards to self-generation, self-storage, microgrids etc. Are utilities planning for this transition sufficiently?

The energy sector is facing many new challenges. Investment in renewables, for example, has been strongly incentivized in many markets over recent years, leading to dynamic power-flows and unpredictable load situations in the grid which cannot be managed in the same way as in the past.

We should be aware that the situation in the grid – and therefore the challenges – differs from market to market. It remains clear, however, that utilities are forced to prepare for this new situation in order to guarantee the right quality of service and avoid unnecessary additional costs, while still being required by the regulator to conduct a more or less passive management of the grid, especially on the low and mid-voltage level.

New technologies are emerging to provide solutions for a more intelligent, active management of the network at all levels, which also allows for the creation of new business models for utilities. We believe that smart metering is a very important first step, but we also believe that more needs to be done.

Some utilities are hesitant to invest in developing smarter grids as technology is evolving quickly and nobody wants to replace costly infrastructure.