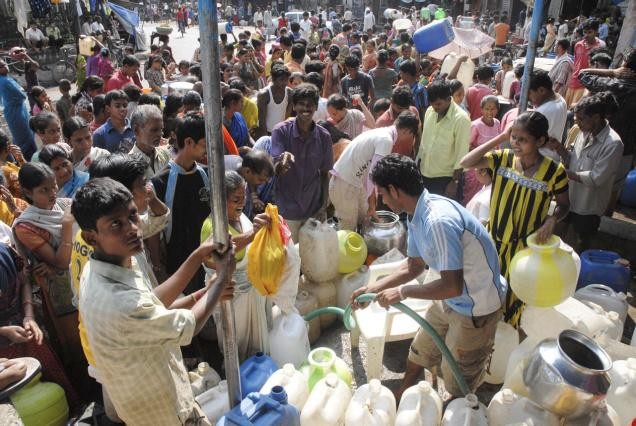 As water scarcity impacts utilities' operations in India, the sector is facing a huge challenge of cutting losses due to theft and ageing infrastructure.

According to global market research company NorthEast Group, there is a high probability that India is experiencing way above currently noticeable water losses due to water theft.

Ben Gardner, president of NorthEast Group, told Metering & Smart Energy International that: “There is a trend for truckers as well as other Indian citizens to illegally source water from boreholes or by siphoning from the water grid.

“As a result, India’s official non-revenue water rate of 34% – slightly above the global average of 28% – may in fact be higher.”

One solution that is being adopted by Indian water utilities is advanced metering infrastructure systems.

NorthEast Group predicts investments in AMI solutions including smart water metering, communication networks and analytics will increase such that by 2020 over US$200m will be channelled to address the country’s water sector.

In November 2015, they announced that they are utilising technology company IBM’s analytics technology to manage water distribution systems.

The water utilities said they selected to implement IBM’s Big Data and predictive analytics to meet the country’s increasing demand for water due to scarcity, rapid population growth and economic development.

For example, the growth in Bengaluru’s (Bangalore) population from 5.4 million in 2000 to over 10 million in 2015 is putting pressure on the city’s water distribution.

The Financial Express reported that the increase in water demand due to the rapid growth in population, has driven BWSSB to partner with IBM for the creation of an operational dashboard based on the IBM Intelligent Operations Centre to monitor, administer and manage its water supply networks.

While KWA said it is using IBM Analytics and Mobility solutions to analyse, monitor and manage water distribution in the city of Trivandrum.

The utility said it has resorted to use IBM’s water distribution solution to curb non-revenue water losses due to leaking infrastructure and unauthorised use of water affecting almost 45% of fresh water.

The utility grid’s installed smart sensors working in conjunction with the IBM Intelligent Operations Water software enables workers to receive alerts via smart devices so they can respond to water leakage cases in near real time.

The water distribution solution also helps KWA in tracking its 210,000 water meters across the city on consumption, thereby reducing billing anomalies and improving revenue collection by more than 10%.

Another key point in the battle to collect sufficient revenue to update ailing infrastructure is pricing.

Gardner explains: “For smart water infrastructure investment to be made in India, government, utilities, and customers will need to acknowledge the full cost of water. If water is not properly priced, then likely needed investments will not be carried out.”

In late January, the city of Pune proposed a hike in water charges by 22.5% in a bid to raise money to upgrade the city’s water supply system including installation of smart water meters.

In the next five years, Pune expects to install water meters in every household in the city.

The India Times reported that the proposed hike in water tax will fetch the city of Pune about Rs 95 crore (US$950m) in 2016-17, which will be directed to the urban water fund for implementation of the city’s 24×7 water project.

“We have sufficient water and every citizen is getting about average 194 litre per head per day. The 24×7 water supply project which will resolve the city’s water supply till 2047 will require Rs 3,300 crore (US$33m),” a city representative said.

However this assessment is optimistic with the Indian Development Ministry declaring that: “At least 30 of 35 big cities in India have much less water than they need, leaving their inhabitants to deal with daily shortages.”

Smart water and water management appears to be on the government agenda with the rollout of the smart cities blueprint as well as increased funding from National Regulatory Authorities (NRAs) and international financial institutions to help improve the country’s water sector.

In late January, French development finance agency Agence Francaise de Development (AFD) agreed to provide €2bn (US$2.24bn) funding for the development of smart cities in the Indian union territories of Puducherry, Chandigarh and Nagpur over the next three years.

The MoU will focus on developments in water and waste management, renewable energy and energy efficiency.

[quote] Puducherry was allowed to draw on public sector expertise from French municipalities, local public companies, agencies for urban planning, as well as input from the private sector.

Commenting on the nature of smart cities projects, Gardner of Northeast Group said “Smart water projects will continue to develop in the near term. India has plans for hundreds of “smart cities,” that will likely include smart water infrastructure.

“But many of the smart city projects have been slow to develop, and large-scale smart water infrastructure, including large-scale rollouts of smart water meters, are not expected until the 2020s.