“The great invention of the nineteenth century was the method of invention”. This maxim from the English mathematician and philosopher Alfred North Whitehead (1891-1947) perfectly applies to the history of the electricity meter, perfected through a series of inventions building on achievements and stimulating further development.

The first half of the 19th century brought brilliant discoveries in electromagnetism. In 1820, the French André-Marie Ampère (1775-1836) discovered the electrodynamic interaction between currents. In 1827, the German Georg Simon Ohm (1787-1854) discovered the relationship between voltage and current in a conductor. In 1831, the British Michael Faraday (1791-1867) discovered the law of induction, on which the operation of generators, motors and transformers is based. 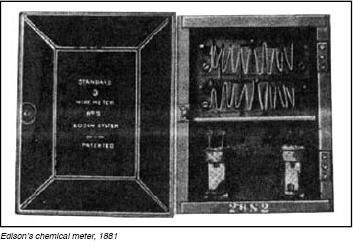 By the second half of the century, the soil was well prepared for practical applications.

Discoveries were followed by inventions and patents. The lamp, the dynamo, the motor, the transformer, the meter and the turbine were invented in quick succession. It is not surprising that once the time is ripe, milestone inventions are achieved quasi-simultaneously in different parts of the world.

The Hungarian Ottó Titusz Bláthy, inventor of the induction electricity meter and co-inventor of the transformer, looked back in 1930 to this exciting period with these words: “In my days it used to be easy. Science was like a tropical forest. All you needed was a good axe, and wherever you stroke, you could chop down an enormous tree.”

With the invention of the dynamo (Anyos Jedlik in 1861, Werner von Siemens in 1867) electrical energy could be generated in large amounts. The first mass application of electricity was lighting. When this new product – electrical energy – started to be sold, it was obvious that the cost had to be determined. 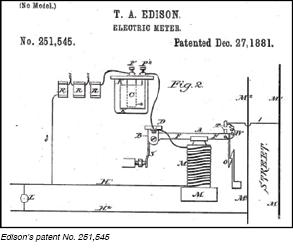 It was not clear, however, what the units billed should be, and what would be the most suitable measuring principles.

The earliest meter was Samual Gardiner’s (USA) lamphour meter patented in 1872. It measured the time during which energy was supplied to the load, as all the lamps connected to this meter were controlled by one switch. Subdividing lighting circuits became practical with the introduction of Edison’s light bulb, and this meter became obsolete.

Thomas Alva Edison (1847-1931), who introduced the first electrical distribution systems for lighting using direct current, held that electricity must be sold just like gas – also used extensively for lighting at that time.

It contained an electrolytic cell, into which an accurately weighed strip of copper was placed at the beginning of the billing period. The current passing through the electrolyte caused a deposition of copper. At the end of the billing period, the copper strip was weighed again, and the difference represented the amount of electricity that had passed through. The meter was calibrated so that the bills could be rendered in cubic feet of gas.

These meters remained in use until the end of the 19th century. There was, however, one large drawback – meter reading was difficult for the utility and impossible for the customer. Edison later added a counting mechanism to aid meter reading.

There were other electrolytic meters, like the German Siemens-Shuckert hydrogen meter and the Schott&Gen. Jena mercury meter. Electrolytic meters could measure only ampere-hours and were not suitable when the voltage fluctuated.

Another possible principle upon which to build a meter was to create some motion – oscillation or rotation – proportional to the energy, which could then drive a register to read.

The principle of the pendulum meter was described by the Americans William Edward Ayrton and John Perry in 1881. In 1884, without knowing of their invention, Hermann Aron (1845-1902) in Germany constructed a pendulum meter.

In its more advanced form this meter had two pendulums, with a coil on both pendulums connected to the voltage. Below the pendulums there were two current coils winding in opposite directions. One of the pendulums therefore was running slower and the other faster than without load.

These meters were expensive because they contained two clocks, and they were gradually replaced by motor meters. Pendulum meters measured ampere-hours or watthours, but could be used only for direct current. 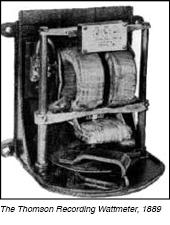 The American Elihu Thomson (1853- 1937) developed his ‘Recording wattmeter’ in 1889 for General Electric. It was an iron-less motor, with the rotor excited by the voltage through a coil and a resistor, using a commutator.

The stator was excited by the current, and the driving torque was therefore proportional to the product of voltage and current. The braking torque was provided by a permanent magnet acting on an aluminium disk, fixed to the rotor. This meter was used mainly for DC. The big disadvantage of the motor meters was the commutator.

However, an important disadvantage of direct current systems soon became apparent – the voltage could not be changed, and therefore it was not possible to build larger systems. In 1884, the French Lucian Gaulard (1850-1888) and the English John Dixon Gibbs invented the ‘secondary generator’, the precursor of the modern transformer.

A practical transformer was developed and patented for Ganz in 1885 by three Hungarian engineers – Károly Zipernowsky, Ottó Titusz Bláthy and Miksa Déri. In the same year, Westinghouse bought the patent of Gaulard and Gibson, and William Stanley (1858-1916) perfected the design. George Westinghouse (1846-1914) also bought the AC patents of Nikola Tesla.

With this, the AC electricity system became feasible, and from the beginning of the 20th century it gradually took over from DC systems. In metering, a new problem had to be solved – the measurement of AC electrical energy. 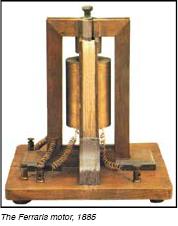 In 1885, the Italian Galileo Ferraris (1847- 1897) made the key discovery that two out-of-phase AC fields could make a solid armature like a disc or cylinder rotate. Independently the Croatian-American Nikola Tesla (1857- 1943) also discovered the rotating electric field in 1888. Shallenberger also – by accident – discovered the effect of rotating fields in 1888, and developed an AC ampere-hour meter.

The braking torque was provided by a fan. This meter had no voltage element to take the power factor into account; therefore it was not suitable for use with motors. These discoveries were the basis of induction motors, and opened the way to induction meters. In 1889, the Hungarian Otto Titusz Bláthy (1860-1939), working for the Ganz works in Budapest, Hungary, patented his ‘Electric meter for alternating currents’ (Germany No 52,793, USA No 423,210).

As the patent describes: “This meter, essentially, consists of a metallic rotating body, such as a disk or cylinder, which is acted upon by two magnetic fields displaced in phase from one another.

The said phase displacement of phases results from the fact, that a field is produced by the main current, while the other field is excited by a coil of great self induction shunted from those points of the circuit between which the energy consumed is to be measured.

The magnetic fields, however, do not cross one another within the solid of revolution, as in the well known arrangement by Ferraris, but pass through different parts of the same, independent from one another.”

With this arrangement, Bláthy managed to achieve an internal phase shift of almost exactly 90°, so the meter displayed watthours more or less correctly. The meter used a brake magnet to ensure a wide measuring range and was equipped with a cyclometric register. Ganz started production in the same year. The first meters were mounted on a wooden base, running at 240 revolutions per minute, and weighed 23 kg. By 1914, the weight was reduced to 2.6 kg. 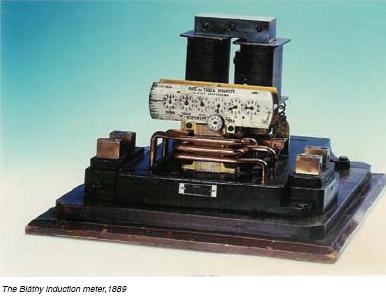 Oliver Blackburn Shallenberger (1860-1898) developed an induction type watthour meter for Westinghouse in  1894. It had the current and voltage coils located on opposite sides of the disc, and two permanent magnets damping the same disc. It was also large and heavy, weighing 41 pounds. It had a drum-type register.

Ludwig Gutmann, working for Sangamo, developed the “Type A” AC watthour meter in 1899. The rotor was a spirally slotted cylinder positioned in the fields of the voltage and current coils. A disk riveted to the bottom of the cylinder was used for braking with a permanent magnet. There was no power factor adjustment. 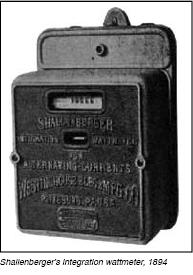 In the following years, many improvements were achieved: reduction of weight and dimensions, extension of the load range, compensation of changes of power factor, voltage and temperature, elimination of friction by replacing pivot bearings by ball bearings and then by doublejewel bearings and magnetic bearings, and improving longterm stability by better brake magnets and eliminating oil from the bearing and the register.

By the turn of the century, three-phase induction meters were developed using two or three measurement systems arranged on one, two or three disks. 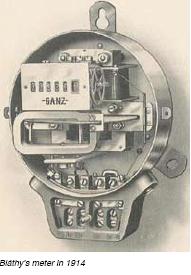 Induction meters, also known as Ferraris meters and based on the principles of the Bláthy meter, are still manufactured in large quantities and are the workhorses of metering, thanks to their low price and excellent reliability.

As the use of electricity spread, the concept of the multi-tariff meter with local or remotely controlled switches, the maximum demand meter, the prepayment meter, and the maxigraph were quickly born, all by the turn of the century.

The first ripple control system was patented in 1899 by the French César René Loubery, and was perfected by Compagnie des Compteurs (later Schlumberger), Siemens, AEG, Landis&Gyr, Zellweger and Sauter and Brown Boveri, just to name a few. In 1934, Landis&Gyr developed the Trivector meter, measuring active and reactive energy and apparent demand. 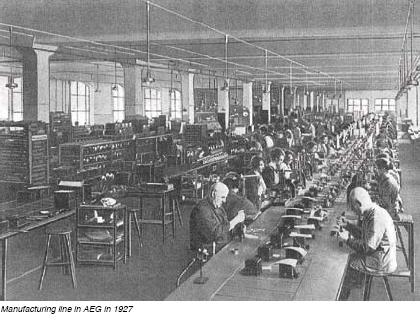 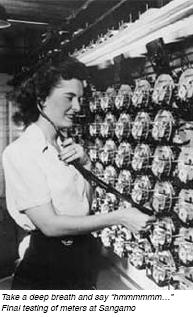 The great period of the initial development of meters was over. As Bláthy put it, continuing his metaphor: “Now you walk for entire days without even finding a bush”.

Electronic technologies did not find their way to metering until the first analogue and digital integrated circuits became available in the 1970s. This can easily be understood if one thinks of the power consumption limitations in the closed meter boxes, and the expected reliability.

The new technology has given a new impetus to the development of electricity meters. Initially, high precision static meters were developed, mainly using the timedivision multiplication principle. Hall cells were also used, primarily for commercial and residential meters. Hybrid meters consisting of induction meters and electronic tariff units were constructed in the 1980s. This technology had a relatively short run. 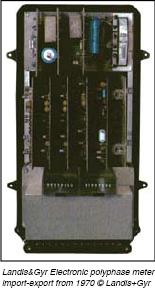 The idea of remote metering was born in the 1960s. Initially, remote pulse transmission was used, but this has gradually been replaced by using various protocols and communication media.

Today meters with complex functionality are based on the latest electronic technology, using digital signal processing, with most functions being implemented in firmware. 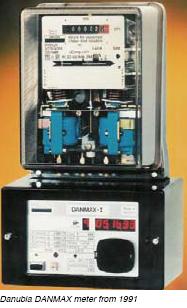 The need for close co-operation between manufacturers and utilities was achieved relatively early. The first metering standard, the ANSI C12 Code for electricity metering, was developed as early as 1910. Its Preface says: “While the Code is naturally based upon scientific and technical principles, the commercial side of the metering has been constantly kept in mind as of very great importance”.

The first known IEC metering standard, Publication 43, dates from 1931. The high standard of accuracy is an outstanding characteristic that was established and maintained by the metering profession. Leaflets from as early as 1914 feature meters with an accuracy of 1.5% over the measuring range of 10% or less to 100% of maximum current. IEC 43:1931 specifies accuracy class 2.0. This accuracy is still seen as adequate for most residential applications today, even for static meters. 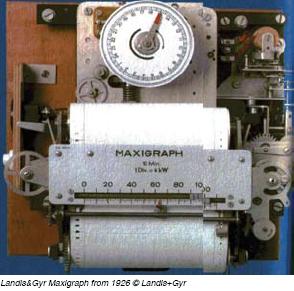 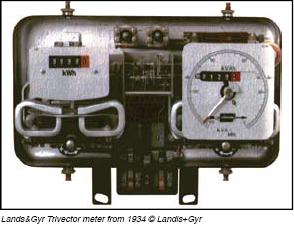 Focusing on the business aspects of metering, and building on the latest results in technology – these are the keys for continued success in the history of metering.

It is not possible to list here all the sources from which this work was drawn. The author would like to say thanks to those colleagues in the metering industry who have provided valuable documents.

Ports to play a key role in the global energy transition