Bill me, if you can!

As Plato the Greek philosopher once stated, necessity is “still” the mother of invention. Although not much of an issue in his time, some citizens living in today’s electrified world find it necessary to manipulate their electricity meter to cause it to stop, under-register or run backwards, effectively using power without paying for it.

Regardless of underlying reasons for this behavior, this is in fact fraud, and is illegal in most countries. Although energy theft accounts for double-digit percentages of revenue loss in some regions, most utilities do not prosecute those caught stealing, but rather charge the maximum possible rate to the user under a ‘tampering’ tariff.

Tampering techniques vary from intrusive means such as breaking the meter housing and jamming the mechanism to more subtle methods like applying magnets to the outside of the meter to saturate magnetic components, or altering the characteristics of the load by adding capacitance, half wave rectified loads or instantaneous high currents. Some may bypass the meter, wholly or in part, which can cause an increase in the AC current flowing through the meter’s neutral terminals.

Conversely, the electric utility, also driven by necessity, provides a first line of defence against such acts by sealing the meter enclosure, installing meters out of reach, or installing more sophisticated electronic meters with advanced anti-tamper features. These advanced features may include measurement of the reflected load (VAR-hours), neutral current, DC currents invoked by rectified loads and detection of ambient magnetic fields. Substation meters may also be used to detect discrepancies between the total billed and the total generated power, and report them via an AMR network.

These anti-tamper techniques are well known in the industry, but are not widely applied in developed countries simply because tampering is rare. On the other hand, in regions where tampering is a common aspect of popular culture, various revenue protection schemes have been and continue to be implemented by utilities. In extreme cases, some utilities may even be forced to shut down service to entire districts rather than lose further revenue or face bankruptcy.

For example, in some districts in India, expensive generating plants may at times become idle for this reason. This situation has led the local industry to develop meters with the most thorough sets of anti-tampering features in history, some with the aid of Teridian Semiconductor Corporation and their talented local representatives in India. Here are public references from a single-phase static energy meter specification published by Maharashtra State Electricity Board (MSEB):

“Meters shall detect, register correctly the energy under any or all following tamper conditions and provide visual indication of tamper in any of the following forms:

• Reversal of phase or neutral.

• Reversal of line and load terminals.

• Load through local earth or without earth.

• Neutral disconnected from load, supply or both sides.

• Meter working shall not be affected by permanent magnet of up to 0.5 T.

• Detection and restoration of the magnetic influence more than 0.2T with date & time stamping.

• CTs in the meter are to be provided with proper magnetic shielding.”

From the perspective of metering system architecture – and more specifically solid-state electronics – both line and neutral currents need to be measured to meet these requirements. In addition at least one of the sensors used in measuring these currents must be electrically isolated from the metering IC. If it is not, for instance in a 280 Volts RMS rated meter, the maximum relative AC voltage difference between these two sensor inputs could reach to more than 800 Volts peak to peak.

Unfortunately, these levels of difference voltages cannot be sustained by commercial semiconductor IC technologies. To achieve this isolation an expensive current transformer (CT) sensor is commonly used to sense at least one of two current inputs. These CT sensors are often encapsulated in metal shielding to protect them from magnetic tamper, which adds further cost to the meter’s bill of material (BOM).

Although current transformers have been commonly used in polyphase meters for years, they are now popular in residential anti-tamper meters for the purpose of neutral current measurement. However, another type of current sensor, the Rogowski coil, is starting to gain increasing acceptance and desirability in anti-tamper metering applications.

The reason for this is as follows. Unlike conventional current transformers, Rogowski coils are not wound around a metallic core. Since there is no core to saturate in the presence of strong magnetic fields, these sensors are largely immune to magnetic tamper. In addition they are about 20% less expensive than shielded current transformers, due to the absence of costly metallic materials.

The drawback of the Rogowski coil approach, however, is that the output produced by the sensor is differentiated (di/dt) and needs to be electronically integrated with either analog or digital circuits in order to provide the required current flow reading. This added circuitry may be external or internal to the metering IC, but generally adds BOM cost in a meter design based on a conventional metering IC architecture.

Therefore, if for a moment we forget the added cost of a di/dt integrator, the ideal anti-tamper residential meter is arguably one which would incorporate a combination of a shunt for line current, and a Rogowski Coil for neutral current sensing. Teridian Semiconductor’s metering solutions support this combination of sensor technologies with inclusion of several key architectural features, including selectable Rogowski coil integrators on chip. 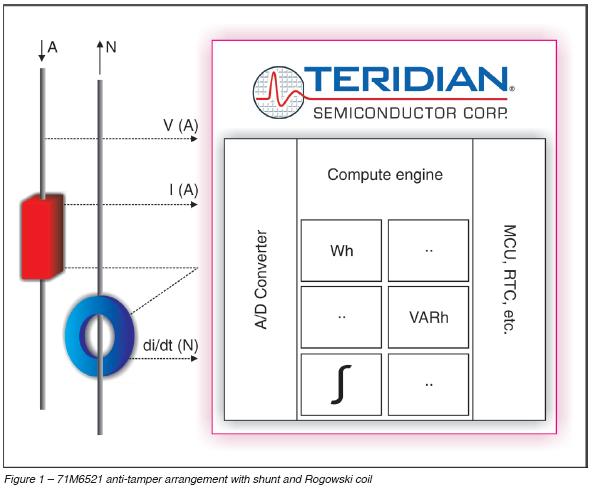 As depicted in figure 1, Teridian’s highly integrated 71M6511 and 71M6521 metering ICs with Single Converter TechnologyTM are uniquely equipped to deal with these tamper requirements by offering up to four sensor inputs which sense line and neutral currents with a combination of resistive shunt and Rogowski coil (one voltage and two current inputs shown).

In summary, utility companies worldwide continue to seek innovative approaches to curb energy theft. They also continue to expect lower cost metering solutions from their suppliers. Teridian Semiconductor’s single chip metering products help OEMs keep up with these demands by offering a reduction of up to 30% of bill of material (BOM) costs, as well as the most advanced anti-tamper features in the industry.