Both standards require the meters’ current inputs to be tolerant to direct current (DC). Although typical meters do not take this into account when measuring power, it may be superposed on the alternating current (AC) to be measured, and may not overload the current input or distort the measuring signal.

The standards stipulate a test in which a rectified sin current of a value that is unusually high for a household (Imax /√2) is applied to the meters. Current half waves and voltage are thus in phase. The meters must measure the exact product of the 50 Hz voltage and 50 Hz components in the half-wave current. The DC components and the harmonics in the half-wave current lead to no relevant power component in the product calculation.

Manufacturers of toroidal core current transformers offer models with the described DC tolerance, used especially in electronic Watt-hour meters. Excellent linearity in their transfer characteristics, such as the current amplitude and the phase angle as well as the long-term stability, are other important application properties. Because of the combination of all these properties, linear current transformers have long been established in the input circuit of the meters, especially as they additionally ensure the insulation between the meter electronics and the current input.

The transfer characteristics of such core combinations are critical for electricity meters in the event of a mixed current load. This concerns all technical parameters, both the phase and amplitude behaviour, as well as the linearity in the current amplitude.

Meters with the known type of combined core current transformers do not work perfectly when a DC component and an AC of fundamental frequency with cosφ≠1 occur simultaneously. The power measurement will be inaccurate, as the following tests confirm. 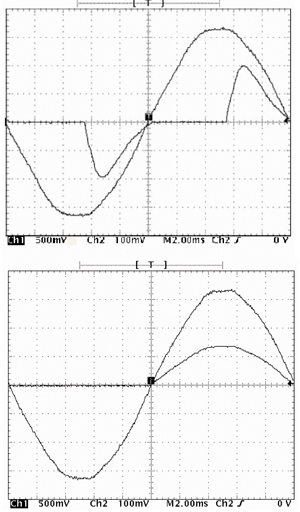 REAL HOUSEHOLD APPLIANCES AND TECHNICAL CONNECTION TERMS AND CONDITIONS
Above all, static Watt-hour meters are expected to correctly measure the typical loads at their application site. All those concerned agree on this, namely the end-users who demand an account of their real consumption, and the operators of the metering points who want to give their customers a correct invoice and ‘look beyond’ the IEC standard and the requirements stipulated with the aid of a preventive quality assurance on the meters. However, at the end of the day, the network operators make the users pay for the losses resulting from incorrect measurements, whether through increased network rates or energy prices.

For this reason, the following question should be answered: How do newer types of calibrated meters handle the real current loads in the household, especially when the electric household appliances generate DC components?

The drives of the vacuum cleaner and the food processor are voltage controlled universal motors, i.e. typical asynchronous machines whose speed is controlled by a phase control. The hair dryer’s motor and heating output is reduced by a semiconductor diode. In this format, the hair dryer thus produces the typical DC component because it only uses electricity in one polarity as a current half-wave. The other two appliances generate a phase shifted alternating current.

Results
Two adjusted and calibrated three-phase current meters (samples A and B) of a newer design were loaded singlephase on the 230 V mains supply in a real arrangement with the household appliances and measured with a calibrated test meter (MT3000 from ZERA, Königswinter).

The analysis of the total load current of all three appliances together gave a 50 Hz current total of 7.4 Arms with a cosφ of 0.85inductive and a pure DC component of 2 A.

The meters were therefore operated at about 150% of their base current Ib in accordance with IEC 62052-11, which is not an unusual value.

The assumption that the household meters with the combined core transformers already react sensitively to some typical loads and exceed their calibration error limits was confirmed. The determined deviation of 4.5% in a measuring environment with three conventional household appliances is too high from a consumer point of view.

The typical current curve generated by the vacuum cleaner or the food processor is shown in Figure 1a. The currents are produced by a phase control of the 50 Hz supply voltage. A steep rise in current is prevented by the motor inductance. The current value zero is not reached until after the zero voltage crossing. This shifts the 50 Hz component of the current considerably.

The hair dryer’s current is shown in Figure 1b. The 50 Hz component contained in the half-wave has a phase shift of almost zero. The DC component’s value is about 30% based on the current amplitude.

Both currents add up to a total current of 7.4 A. With the phase-shifted 50 Hz component of the vacuum cleaner/food processor combination, the resulting cosφ is 0.85. The tests show that the three standard household appliances already generate significant phase shifts. However, electricity meters should measure correctly under these conditions because they are designed for this usage. From the point of view of the standards, which allow meters of class 2 or A an additional error of 6% for mixed current mode, the error values of both meters are still within the limits.

Since the electricity meter is installed in the connection point between the mains feed and the further distribution, the currents of all appliances are included in total in its power measurement. The value this total current may actually reach in view of the superposed current components is only partly defined:

It can be assumed that the operation of typical household appliances, motors and lamps leads to loads exceeding these limit values. Due to the simultaneous use of these appliances, both DC components and 50 Hz current components with cosφ values less than 0.8 occur on the distributing bar. These loads should also be correctly measured by electricity meters.

MEASUREMENTS FROM A NOTIFIED LABORATORY, INCLUDING TESTING IN ACCORDANCE WITH IEC 62053
As well as the measurement described above, a laboratory for Watt-hour meters carried out further tests and series of measurements. Since the standards IEC 62053-21 and EN 50470-3 prescribe a test with current half-waves to assess the design or verify compliance, this test was first carried out according to the standards. It was then modified for better ‘relevance to practice’ based on the previous results with household appliances.

During the test modification, the current halfwaves were not applied to the samples in phases synchronous with the voltage, but with a time lag between the current and voltage crossing the zero axis. This produced the typical superposed current components, DC and phase shifted 50 Hz current, as observed in the practical tests.

The range of variation of the phase shift also corresponded to the values which had been determined on the household appliances and motors. The current values related to the full sin function varied between 0.1 A to 20 A, whereby the negative part of the current wave was omitted for the section of the measurements presented here. The shift between voltage and the fundamental frequency of the current varied between cosφ = 0.9capacitive to 0.5inductive.

Results
The sample with the linear current transformers was inconspicuous. There was no relevant effect on measurement accuracy, regardless of whether the current half-wave was IEC-conformant or connected through a phase shift. All error values of the sample were within the calibration error range, with a bandwidth of +0.6% to -0.3%. 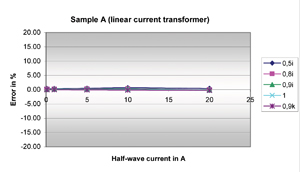 On the other hand, the sample with combined core current transformers reacted strongly to the shifted half-wave. From a value of approximately 8 A, the signal transmission is completely taken over by the non-linear part of the combined core and its poor transmission properties. The error values of the sample are far outside acceptable limits, with an error margin of +18% to -7.5%.

Sample A with the linear current transformer was not affected metrologically by the DC components or the simultaneous connection of phase-shifted current half-waves (Figure 2). The meter remained ‘adjusted’ both in amplitude and angle. The error values were acceptable.

Sample B with the combined core current transformers reacted completely differently (Figure 3). It was found that both the linearity in the current is lost at cosφ = 1 (amplitude error up to -2.7%) and an excessively large phase error occurs at cosφ ≠ 1. The high error value from operation with the household devices was once again confirmed here. 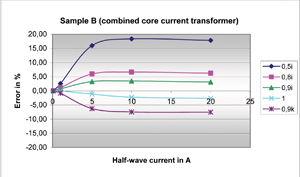 The error difference between the shifts cosφ = 1 and 0.5ind for the meter with combined core current transformer above 8 A is approximately ΔF = +20%. This high positive error is due to the low permeable DC-tolerant part of the combined core, its comparatively high core losses and the high error angle. If the error value is converted into an angle, the result is approximately a Δφ = 7° leading. This angle cannot be compensated in the meter and fully impacts on the power or energy measurement. The combined core current transformer thus illegally gives a false energy reading.

An example that this is not always the case are electricity meters fitted with the described combined core current transformers, whose error values already far exceed the permissible calibration error limits when loaded with conventional household appliances.

Under these normal conditions, electricity meters must display an accurate measurement without exception. It would be great if the rules and standards, which represent the basis for the product evaluations, stated the appropriate tests.

The meters with combined core current transformers and their unacceptable characteristics were found to be unnoticeable in the standard test. Meters with these current transformers have sufficient linearity and an adequate phase error on limited current loads. Their error values are within the calibration error limits. For typical household loads, such as intrusion of an additional direct current and a shifted fundamental frequency component, this behaviour changes drastically, thus preventing electronic meters from providing correct measurements. Such current transformers are therefore unsuitable.

If the conformance assessment were to be conducted using a modified test, which does not apply equal phase current half-waves, but rather half-waves ‘shifted’ in relation to the input voltage, to the sample, this critical behaviour of combined core current transformers could be determined.

The test version carried out here by the laboratory could be the solution for a modernised test. It does not appear to be more complex. The meter test instruments in the test laboratories and assessment areas would, in most cases, be equipped for such applications.