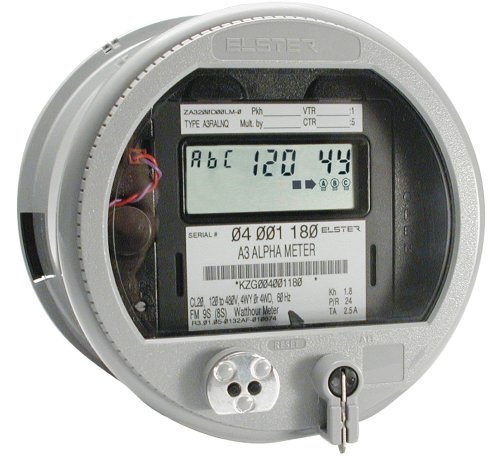 For electricity suppliers to provide a high level of continuous service to their customers, they need a way to monitor the entire supply path. The vast amount of data collection needed in the utility industry necessitates an automated system because on-site human meter readers could never collect data as fast as it is required. Automatic meter reading (AMR) is fast becoming a necessity for utilities as they strive to collect timely, accurate data from an ever-increasing number of service locations.

The key element of an AMR system is the
automatic meter.For rapid deployment, automatic meters must be plug-and-play, transparently replacing existing meters. The SmartMeters from SmartSynch form part of an integrated end-to-end AMR system for commercial and industrial as well as residential customers. In addition to communicating detailed power consumption data, the meters report power outage and restoration status, complete self diagnostics, power service, wiring stability and health, tamper detection, and meter clock deviations and corrections.

For these advanced features to be successfully integrated into a competitive product, the size, lifespan, and cost of the communication hardware’s power supply are key considerations in creating the wireless meter. Since the meter must report power outage events, it requires some form of energy storage. Lead acid batteries had been the original power source, but their life expectancy was only three to five years, they were relatively large and heavy, and battery replacement was a costly process. 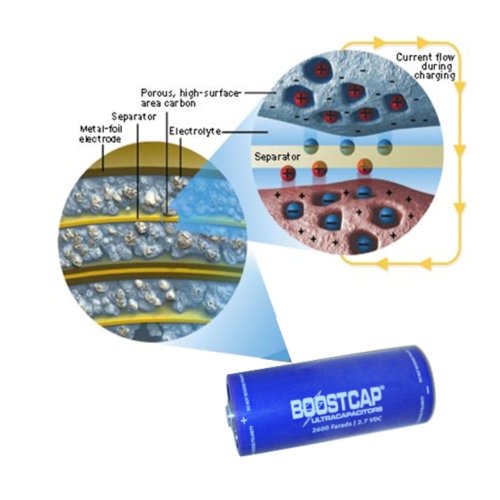 An energy source was needed that could draw power from the meter power supply at a relatively constant rate and then handle the power peaks demanded by the meter’s wireless connectivity. Power peaks are known to dramatically reduce the life of conventional batteries. The power source also needed to withstand the full operating temperature range (-40°C to +85°C). Operating at such extreme temperatures diminishes operating performance and shortens the life of batteries, while also degrading their packaging. During an investigation into alternative power supply options, discovery was made of ultracapacitors (also called ‘supercapacitors’ or ‘electrochemical double-layer capacitors’) as an innovative technology for energy storage and power delivery, and it was realised that they could provide many benefits over their existing components.

For the AMR application, the Boostcap® PC10 ultracapacitor from Maxwell Technologies was selected. The PC10 ultracapacitor is small, lightweight, and board-solderable. Though it stores less energy than a battery, it stores far more than the specification requirement, and meets the power required to transmit the AMR’s data. Relatively inexpensive, the ultracapacitor requires no special charging regimes, operates well over the AMR’s complete temperature range, and has a proven installed life of up to ten years. 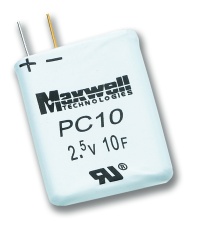 An ultracapacitor stores energy electrostatically by polarising an electrolytic solution.Though it is an electrochemical device there are no chemical reactions involved in its energy storage mechanism. This mechanism is highly reversible, allowing the ultracapacitor to be charged and discharged up to a million times or more. An ultracapacitor can be viewed as two non-reactive porous plates suspended within an electrolyte with an applied voltage across the plates.

The applied potential on the positive plate attracts the negative ions in the electrolyte, while the potential on the negative plate attracts the positive ions. This effectively creates two layers of capacitive storage, one where the charges are separated at the positive plate, and another at the negative plate. The capacitance depends directly on the size of the plates, and in conventional capacitors it normally lies in the range of several microfarads. Ultracapacitors, by contrast, can achieve capacitances of several thousand farads. Ultracapacitors are also able to deliver high power over short periods, which is another attractive feature for transportation applications.

Ultracapacitors are utilised in the Elster A3 ALPHA®, Itron SENTINEL and Itron CENTRON wireless SmartMeters. An energy storage sub-system has been developed in the meter containing six ultracapacitors and utilising patented (US Patent #6,819,226) state-of-the-art technology. With ultracapacitors in the meter, instead of more traditional energy sources such as lithium ion or lead acid batteries, the life expectancy of the power supply is extended to over fifteen years, providing a 100% to 300% improvement over lead acid batteries.

This design also leverages the ultracapacitor’s lightweight, rugged packaging and numerous mounting options. Moreover an overall cost saving of over $200 per meter was achieved by eliminating the battery replacement task during its 10-year cycle, a saving that has been able to be passed on to customers. Additional savings in hardware costs are achieved through the smaller footprint of the new ultracapacitor-based power supply.

Customers have provided very positive feedback on this version of the SmartMeter, which entered distribution in early 2003. The performance improvements and price reduction of the meter resulting from the migration to ultracapacitors are so significant that the components are considered a key selling point.

This end-to-end AMR solution enables the utility meter to perform myriad new functions, which are possible only with the integration of new components. Conventional components are inadequate because of their cost, size, performance, and reliability. The success of the system required the integrator to identify new alternative components and suppliers. By adopting new component technology, an increased performance and reduced cost of an AMR meter have been realised, in turn providing greater value for customers and building new markets for the systems.