The advent of AMR (automatic meter reading) has led to greater efficiency for utility companies in the collection of energy, gas and water consumption data. Replacing manual reading with networked metering systems has reduced labour costs and also enabled some other services which the utility company can conveniently provide, such as real-time price signalling and remote disconnection of service. Using wireless technology in AMR systems further reduces costs by eliminating cables and also introduces new system possibilities such as drive-by meter reading.

Notwithstanding the benefits of wireless AMR, ensuring reliable radio communication in the presence of radiation from an ever-increasing number of wireless devices in other industrial and consumer applications is a challenge. High performance from the RF circuitry is required as rejection of interference becomes increasingly important. It is also desirable to have long radio signal transmission range to minimise network infrastructure costs and low power consumption to maximise the meter’s battery lifetime. The protocol or rules of communication used by the meter and collector’s circuitry must not only be designed for reliability and power-efficiency, but also for compliance with radio emissions regulations in the country of operation. 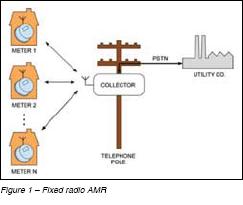 Any number of wireless AMR system implementations and network topologies are possible. A fundamental choice faced by a utility is whether a public network, such as GSM or GPRS, or a private network should be used. In many cases, the use of an entire or partially private network, designed specifically for wireless AMR with tailored communication protocols and modulation schemes, may be more appropriate. Two of the main wireless AMR systems are fixed radio and drive-by.

Data from multiple meters is sent to nearby concentrators or collectors. In a residential situation, the collector is often located on a telephone pole, collecting data from the meters in houses along the street. The collector sends meter data back to the utility company’s premises via another wireless link or the PSTN (Public Switched Telephone Network). With bidirectional links between meters and the utility company, remote functions other than simply consumption data can be enabled. Real-time price signalling, demand response and remote deactivation of service are some examples.

A mobile collector, in the form of a handheld unit for example, is located in a van and driven around a residential route, collecting metering data from houses as it passes. 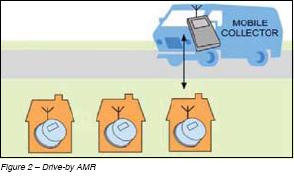 ADI designs and manufactures high performance, low cost RF transmitter (Tx) and transceiver (TRx) ICs. These are suitable for implementing the wireless links in the AMR systems illustrated above, as well as for use in general purpose wireless connectivity applications in ISM and other bands below 1GHz. Table 1 lists those products best suited to AMR applications.

The ADF7020 transceiver is designed to operate primarily in the popular ISM (Industrial, Scientific and Medical) bands at 915MHz, 868MHz and 433MHz. As the functional block diagram in Figure 3 shows, the ADF7020 integrates all the main RF transmitter and receiver building blocks into a single chip. This high level of integration saves the system designer the extra cost of numerous individual components and simplifies design.

For AMR applications that use a one-way wireless link between meter and collector, the ADF7012 transmitter can be used. The ADF7012 uses similar transmitter circuitry to that of the ADF7020 and can be tailored to operate in sub-bands between 75MHz and 1GHz using an external tuning inductor.

Each of the products is highly configurable, with control over RF channel frequency, transmit power, modulation scheme and many other parameters. This configuration flexibility is important for designers of products for international markets, because radio regulations in different countries mandate the use of different frequency bands and power levels for different applications. The ADF7020-1 and ADF7012’s customisable output frequency range allows the designer to operate in bands other than the licence-free ISM bands. 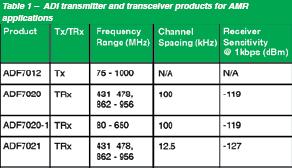 In wireless AMR systems, and in radio systems in general, a receiver must detect the intended transmitted signal in the presence of other signals in adjacent frequency bands. A receiver with good selectivity will pass the wanted signal, while rejecting interference from unwanted signals in adjacent channels. This can be difficult to achieve, particularly if a popular ISM band, such as 902MHz – 928MHz is used.

The ADF702x transceiver family is equipped to maximise selectivity in harsh radio environments. The channel filter has a polyphase property which passes the wanted signal and attenuates image signals created in the down conversion process. The LNA and mixer circuits have enhanced linearity modes which minimise interference from unwanted signals. For low baud rate applications, the ADF7021 narrowband transceiver’s narrow filter bandwidths give greater attenuation of signals in adjacent channels.

Replacing batteries in a system with many meters is a large operation which should be done as rarely as possible. The ADF70xx family of devices has been designed for low power consumption in both power-down and normal operating modes, in order to maximise battery life. 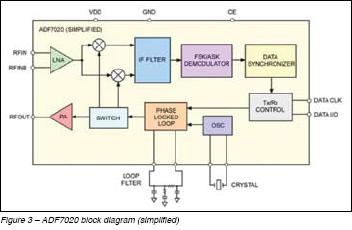 The multiple wireless meters in a fixed radio network need to follow some kind of communication strategy or protocol in order to communicate efficiently with the local data collector, and in a manner that does not infringe on radio regulations. The system shown in Figure 4 uses a star network topology, with the collector as a central base point and the meters as peripheral end points. ADI has developed a software protocol, named ADIismLINK, which can be used to implement such a wireless star network. This forms part of an ADF702x Development Platform, which provides users with an out-of-the-box hardware and software solution for implementing wireless sensor networks.

Since the network has a star topology, each of the end points can only communicate with the base point and not with each other. 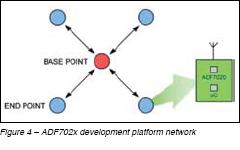 It then enters receive mode again and listens for an acknowledgement signal from the base point. If this signal is received, the end point switches the transceiver into powerdown mode to save power. If the end point doesn’t receive the acknowledgement, it repeats the transmission procedure. The amount of end point transmission attempts, or retries, along with many other protocol and transceiver parameters, can be configured using a software GUI.

The European Telecommunication Standards Institute (ETSI) ISM bands at 433MHz and 868MHz have duty cycle constraints that limit device transmission time to 10% or less. In the United States, a Federal Communications Commission (FCC) IS  band between 902MHz and 928MHz mandates the use of frequency hopping, with limitations on the amount of time spent on each channel. ADIismLINK software configuration files are available which implement protocols that meet these specific regulations. 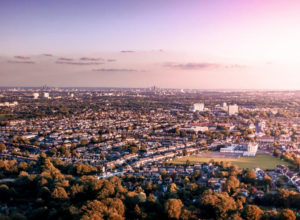