The most suitable battery currently for a utility meter is the lithium thionyl chloride (Li-SOCl2) cell, which has a low leakage current, long shelf life and wide temperature range characteristics (+85 to -40OC). However, its major disadvantage when used in automated meter reading (AMR) technology is that the Li-SOCl2 cell has a passivation layer on the lithium surface. This layer, composed of LiCl crystal, grows during the storage period and is broken depending on the intensity of the current drain. If the passivation layer gets broken by a momentary high current drain, a leakage current occurs continuously during the reaction between lithium and SOCl2 (4Li + 2SOCl2 → 4LiCl + S + SO2) in the rebuilding of this layer. Therefore when a Li-SOCl2 cell is used for a utility meter, both the power profile and storage conditions need to be considered in selecting a battery.

HOW TO CALCULATE BATTERY LIFE
The battery life can be calculated through an equation that includes the current during use and the leakage current after pulsing and self discharge for storage under the intended operating temperature and environmental conditions.

However, the actual battery life is not based on a nominal capacity obtained at standard discharge current, but on the specific capacity resulting from the current under use and the storage and environmental conditions. Such capacity is normally 90 to 95 percent of the nominal capacity and is lower at low temperatures than at high temperatures. Moreover at the end of the discharge, the internal cell resistance increases for exhausted electrolyte, as the Li-SOCl2 cell uses liquid electrolyte, resulting in a larger leakage current due to the depth of discharge (DOD) and discharge ratio. 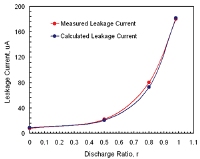 WHAT IS THE BEST DESIGN FOR AN AMR WIRELESS SYSTEM?
The correct battery for an AMR device is the bobbin type Li-SOCl2 cell with high capacity, low self discharge, wide temperature range and excellent safety record. Such cells for the utility meter can be parallel cells of a small size (AA or A size) or a single cell of a larger size (C or D size). For the purpose of extending the battery life the hybrid battery is more effective than a normal one. 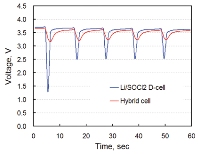 The power profile of an AMR utility meter is composed of a high pulse current (typically 200 mA to 2 A) for a few milliseconds and a base current of microamps for most of time. In general, 5 F or less is sufficient for the capacitance of a capacitor. In particular at low temperatures (below -20OC), the charging rate from battery to capacitor is more effective after pulse discharge.

Therefore, the capacitor for a hybrid battery requires a low equivalent serial resistance and low leakage current, which could be more important than the capacitance.

AREAS ARE UNDER STUDY FOR HYBRID BATTERY DESIGN FOR AMR
The main area of the research for AMR is undoubtedly in increasing battery capacity. Battery size is fixed by international standard and accordingly battery designers are focusing their efforts on increasing capacity within these standard sizes. Also engineers are researching the internal reaction mechanism in the battery and the cell balance to reduce the leakage current of the hybrid battery.

Over a long period Vitzrocell has developed and accumulated know-how with the Li-SOCl2 cell and hybrid battery. The company takes great pride in strong partnerships with AMR designers worldwide. In the RF power module, the role of the battery is as important as the power source. Whenever a new type of AMR with fixed network is developed, battery tests will be required under various conditions.