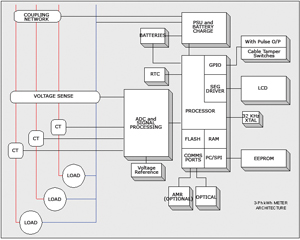 Typically, low cost 3-phase kWh meters are required for residential applications that have 3-phase power supplied to the household. This can be found in countries such as Finland and Turkey, where the maximum current available on each phase is restricted, so customers need to use the combined current from a 3-phase supply. This is normal for residential homes in large cities, where current demand is high, but not so necessary in small countryside villages.

However at this low cost end of the market, the total cost of three current transformers is the largest single contributor to the meter bill of materials (BOM) and design engineers must be innovative in trying to reduce this overhead. If the meter is designed according to IEC 62053-21, for directly connected meters (which must be DC current tolerant) the cost of the CTs is a significant chunk of the cost budget.

CHALLENGES FOR THE DESIGN ENGINEER
One alternative is the use of resistive current shunts in place of the costly current transformers, as shown in Figure 2. The use of resistive shunts in a 3-phase design poses a difficult challenge to the designer, particularly when confronted with how to provide isolation between the resistive shunts and associated line-to-line voltages, which would permanently damage the measurement engine typically implemented in a low cost 8-bit microprocessor.

A practical solution of coupling each shunt with a voltage transformer to provide the isolation is already covered by several international patents. So the only alternative left is to replicate the current sensing circuitry for each phase, with its own individual shunt, 1-phase measurement device (1-ph AFE) and isolated power supply. The measurements for each phase can then be combined at the microprocessor itself, requiring another isolated power supply and isolation from each individual 1-phase AFE. 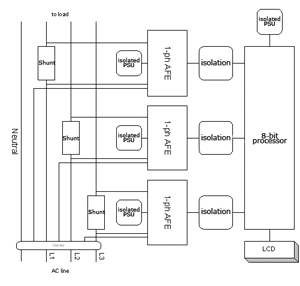 Resistive shunts have been used for many years in low cost 1-phase kWh metering applications, but they do have limitations, because of power consumption and thermal effects at high current loads.

The shunt will consume power from the current measuring circuit and according to IEC 62053-21 this must be restricted below 4 VA for a Class 1 meter and below 2.5 VA for a Class 2 meter. The knock on effect for designers is that they must keep the resistance of the shunt within a few hundred micro-Ohms. Resistive shunts of this value are readily available, but they considerably reduce the effective dynamic range of the 1-phase measurement IC. For example, using a 400 μΩ shunt at 20 mA would provide a very small 8 μV voltage drop (20 mA * 400 μΩ). These voltages may require the use of an external op-amp to increase the signal and make better use of the measuring IC’s input dynamic range, adding further expense to the design.

Other considerations which make this approach less attractive are: 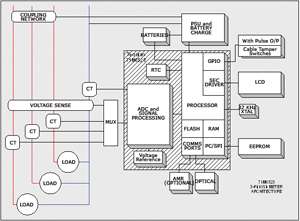 INNOVATIVE APPROACH OF THE TERIDIAN 71M6523
The innovative approach of Teridian’s latest 71M6523 allows designers to meet and exceed the requirements of IEC 62053-21 for a low cost 3-phase kWh meter, using the more traditional and robust design approach of current transformers, as shown in Figure 3.

The main benefits of using current transformers are high current capacity, isolation, low thermal drift, low power consumption and long-term stability. With the advent of lower cost core material from some of the more popular current transformer manufacturers, such as VacuumSchmelze, the 71M6523 is able to correctly compensate for the phase errors introduced by these lower cost cores and still exceed the accuracy requirements of IEC 62053-21.

The 71M6523 utilises a simple external multiplexer to perform three-phase metrology and has the ability to add a fourth current transformer for neutral current detection, allowing the meter to detect revenue losses, which can be logged against the integrated real time clock (RTC). If the tamper event consists of removing the incoming AC supply, the 71M6523 can still detect any further tampering and intrusions into the meter casing, whilst powering from a secondary battery supply.

The 71M6523 consists of a dedicated compute engine that autonomously performs the three-phase metrology calculations. This reduces the complexity of the application code executing on the embedded 80515, in comparison to that of the 8-bit microprocessor used in the 3-phase shunt design, which needs to combine the single phase data from each of the measuring ICs. The 71M6523 integrates 32 kB of Flash and 2 kB of RAM, which is optimised for the low cost 3-phase kWh application that typically would not require any Automated Meter Reading (AMR). 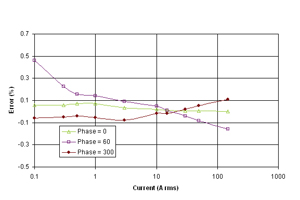 In terms of calibration, the 71M6523 will be easier to handle, based on Teridian’s Single Converter Technology and compute engine software calibration coefficients. In comparison, the current measuring circuits of the 3-phase shunt design will need individual calibration, which will extend the calibration time during production.

In conclusion, for a low cost 3-phase kWh meter application according to IEC 62053-21, the 71M6523 offers an unprecedented feature set, allowing designers to differentiate their meter from the competition and still be within budget and timescales. The 71M6523 overcomes the limitations of the 3-phase shunt application, as described in this article, offering a more integrated design using fewer external components, resulting in better long term reliability, improved performance (Figure 4), easier calibration and reduced calibration time.