Of the total water resources on earth approximately 97.5 percent is salt water, and of the remainder some two-thirds is frozen in the ice caps and glaciers, leaving only one percent available for human use. Moreover that one percent is unevenly distributed, areas once rich in water are facing stress as a result of changing rainfall patterns in global climate change, water tables are dropping as consumption exceeds replacement, and large tracts have been degraded.

It is no exaggeration to say the world is facing a crisis with its water resources, due in no small measure to its management. For example, according to the UN World Water Assessment Programme up to 30 percent of fresh water supplies are lost due to leakage in developed countries, and in some major cities losses can run as high as 40 to 70 percent, while in agriculture large amounts of water, as much as 60 percent in developing countries, are lost to evaporation or returned to rivers and groundwater aquifers because of inefficient irrigation systems.

Unlike metering for electricity the metering of water is much less widespread. According to the ABS World Water Meter Market Report approximately two-thirds of the households with water connections globally – some 60 percent of households – have a water meter, and in total there are about 700 million water meters installed. This is about half the number of installed electric meters. Moreover the incidence of water metering varies widely between countries, ranging from 0 to 100 percent, even within regions such as the European Union. In the UK for example, the incidence of water metering is around only 30 percent.

With concerns for the future of our planet ever increasing and the need for resource use to become more sustainable, just as electric meters – and smart meters in particular – are coming to play an increasingly important role in energy management, so too water meters are increasingly being regarded as offering the means not only of offering an equitable form of payment for water, in that customers pay for what they use, but also to improving management of the resource.

Again using the UK as an example, recent regulatory focus in metering has been on facilitating its introduction in areas that are seriously water stressed – principally the southeast of England – and at the time of writing, a group of MPs has indicated that it plans to call for water meters to be installed in every UK home in order to help conserve water. However, unlike the electricity sector, where regulations have been brought in to spur the introduction of smart metering and advanced metering infrastructure (AMI) and are driving developments, it appears unlikely that comparable regulations would be put in place in the water sector – in the short term at least – and that the drivers will remain very much utility specific and market-based. Nevertheless those drivers are stimulating significant developments in water metering, including water AMI, new bolt-on technologies for functions such as leak detection and flow monitoring, increasing electronic content in water meters, and increasing levels of information provision to customers, such as that provided in bills to customers in Saragossa, Spain (see p. 26).

AUTOMATION IN WATER METERING
Automatic meter reading (AMR) in water has become increasingly widespread over the last ten years or so – more than 27.5 million units have been shipped worldwide, according to the latest Scott Report on international AMR deployments – and even more so in recent years with the greater valuation on its role in improving customer service and improved reliability and longevity of equipment.

This has led to developments such as that by American Water of its “bolt-on” acoustic water leak detector, named MLOG. The device, developed in conjunction with Flow Metrix, is attached to the service pipe in the vicinity of the meter – in general, at about one in every ten – and “listens” for leaks at night, with the data collected in the AMR process for subsequent analysis. The device was piloted on an Aclara (formerly Hexagram) AMR system in Connellsville, Pennsylvania where non revenue water exceeded 25 percent, and in one year of operation the non revenue water was reduced by 280,000 gallons per day with a value of $200,000 per annum and within two years its level was reduced to 11 percent.

Subsequently American Water has also started operating an MLOG/fixed network system provided by Itron in Irvington, New Jersey and is about to test a deployment in suburban Chicago using a leak monitor manufactured by Gutermann along with an innovative transmitter from Aclara. In addition there has been an emergence of a proliferation of new partnerships between leak detection and AMR companies and the testing of other combinations of AMR and leak detection equipment.

As a result of these developments, which have also led to a better understanding of the growth and evolution of leaks, the technique may become a “best practice” in North America, says David Hughes, senior infrastructure engineer in American Water’s Office of Information and Environmental Stewardship. 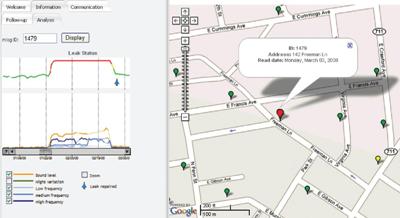 WATER AMI
AMI is starting to appear in water although so far there are rather few deploym ents. “We have deployed about 5,000 meters in various pilots so far, and we plan to continue to roll out up to 50,000 more in 2008,” says Bruce Bharat, director of marketing at Elser AMCO Water, pointing out that many utilities appear to be in a “wait and see” state, waiting for the outcomes of these projects before launching their own rollouts.

As occurred with AMR in water, Bharat sees water AMI developing along the lines of both retrofits to existing installations and smart water meters, with increasing levels of technology built into the meter itself during manufacture. Initially the majority of installations will involve retrofits but as the technology develops and the older meters reach the end of their lives they are more likely to be replaced by dedicated AMI, or at least some form of AMR/AMI hybrid system.

Potential and future technologies that may be incorporated in water AMI include pressure monitoring, flow monitoring – the ability to detect backflow being an important water meter tamper and revenue protection technique – remote shut-off, and increased consumption information for customers via bills, the Internet and in-home displays. And like with electricity AMI, the selection of the technology and the functionalities that would be included in a rollout will ultimately depend on the business case that can be made by the particular utility.

Another beneficiary of water AMI alongside AMI in electricity is the multi-utility environment, in that much of the technology may be shared between the two systems and for example, meter readings from the two may be fed into single data management and billing systems.

The challenges of developing water AMI are principally two-fold. One is in incorporating increasing levels of electronics into a water meter – as Bharat comments, “water and electronics do not mix” – and the second is in being able to provide sufficient long term power capability to the meters, which requires ever more advanced battery technology. Even the possibility of being able to replace a water meter battery requires further study to ensure that the overall engineering and water-tight integrity of the meter is not compromised. Nevertheless increasing levels of electronics are being built into water meters and completely electronic water meters with no moving parts are at various stages of development by different vendors.

ELECTRONIC WATER METERS
The development of electronic water meters has been led by companies such as Severn Trent Services and Elster Amco using fluidic oscillation technology, which uses the water flow to set up a directional oscillation in a chamber with a frequency in proportion to the flow. Such meters are proving to be of particular value in regions such as the Middle East, where there is a high concentration of sand in the water and the absence of moving parts eliminates the problems of wear and jamming.

Subsequently the electromagnetic flow technology has also been developed for water metering by technology development company Sentec – under the name Sterling – which has been licenced worldwide to Sensus Metering Systems. This technology exploits the electrical properties of water and the field that is generated has properties in direct proportion to the flow rate.

Ed Colby, CTO of Sentec, comments that a key feature of this “magflow” technology is that the accuracy is independent of the flow rate, enabling accurate measurement even at very low flow rates. As such also, the power consumption can be optimised to maximise battery life.

For its part Sensus sees growing demand for electronic technology in water meters. “In more and more markets we are seeing AMI and AMR as the logical decision choice for utilities,” says the company’s marketing director, Colin Walsby – a view echoed by Elster Amco’s Bharat, who says that significant growth in the electronic water meter market can be expected within the next five years.

LOOKING AHEAD
New technologies and a changing world are bringing changes to water metering, paralleling those being seen with electricity metering. As a result, water metering, often considered the Cinderella of metering, is poised for significant development and growth in the coming years.

While the numbers are unlikely to reach those of new meters being supplied in the electricity sector and the penetration timescales will be longer, the impact will be equally significant in contributing to both environmental and utility sustainability.