Much has been made over the last decade of the “smart metering boom” and its effect on meter manufacturers, installation and integration companies and smart grid vendors. In fact, IHS has predicted that the 100 million communicating electricity meter milestone will be passed in the near future, bringing with it significant business for these companies. 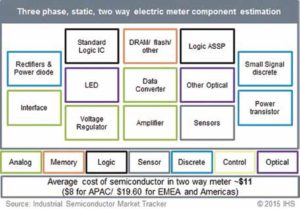 Some other research organisations predict even more significant shipment growth. Less has been said, however, on how this will affect the semiconductor companies who supply the integrated chips (ICs) or “brains” to these devices, and how this jump in unit sales will affect their businesses.

At its most basic, it is clear that as more “smart” meters are sold, manufacturers all the way down the value chain will see benefits. Each of the 100 million electricity meters mentioned above will require an additional transceiver for communications at a minimum.

The most common strategy will be to design smart meters with an optional microcontroller (MCU) plus transceiver modular approach enabling fewer board designs, less software complexity and more flexibility in communications protocols. This “smart” characteristic is in addition to an already extensive semiconductor build of materials. The average static, three phase meter with two way communications capability, for example, will require most of the following components:

That’s not including the component needs of other utility meters such as those for water and gas, which IHS also expects to experience significant increases in shipments over the coming years. Although these types of smart meters typically require fewer logic components, those that utilise static measurement methods tend to require multiple points of reference, and thus require more sensors than their electric counterparts.

Also, communicating gas and water meters don’t have easy access to power, unlike electricity meters, and thus, need both a battery…….