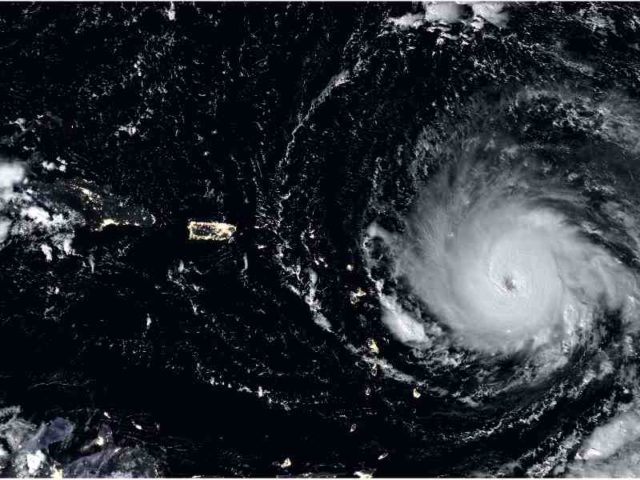 Hurricane Florence is bearing down on the mid Atlantic and by every measure, it’s poised to be an extremely dangerous event — lashing winds, storm surge reaching 9 to 13 feet (2.74m – 3.96m), and inland flooding from 20 to 30 inches (50.8cm – 76.2cm) of rain, and possibly even 40 inches (101 cm) in select locations, writes Julie Mcnamara, an energy analyst at the Union of Concerned Scientists

All this will be occurring in an area that has been experiencing above-average precipitation, meaning saturated soils less able to absorb incoming water and trees that are more likely to fall.

Evacuations have been ordered in Virginia and the Carolinas; Virginia, Maryland, Washington, D.C., and North and South Carolina have declared states of emergency; and the Navy has sent tens of vessels out of Norfolk to better weather the storm.

But not all people have the means to leave, and many more are bracing for the water and wind to come—as well as the inevitable power outages that will follow.

That’s because energy infrastructure is significantly at risk in an event such as this. Storm surge has the potential to inundate coastal assets like power plants and substations, and inland flooding from extreme precipitation threatens to submerge many more. In addition, heavy winds can topple trees and take down wires and poles.

These outages could be severe, triggering another and separate disaster long after the skies have cleared. Across the region, people should heed warnings and be prepared for widespread, long-lasting blackouts, and stock up on food, water, medicines, and fuel.

Here are some electricity-related things to keep an eye on as the storm approaches, plus updates as needed as we learn more.

Power outages can occur due to disruptions at any point in the system, from power plants to transmission and distribution lines, to the many critical substations enabling power flow in between.

There are 7 nuclear reactors operating in South Carolina and 5 in North Carolina, plus 4 more in Virginia. There are an additional 32 coal generators in the Carolinas alone, plus many natural gas, biomass, and solar facilities, and even one large-scale wind farm, according to the Energy Information Administration.

One plant of immediate concern is Duke Energy’s Brunswick Nuclear Power Station, situated along the North Carolina coast and presently right in the line of the storm. Brunswick is a large, two-reactor nuclear plant. In the aftermath of Fukushima, the Nuclear Regulatory Commission (NRC) conducted a review and Brunswick found hundreds of missing, degraded, or unverifiable flood seals.

The follow-up report is not publicly available, though the company states it has since installed more safety equipment at the plant. What’s more, the NRC recently concluded that reevaluated flood hazards exceed the plant’s current design basis; the stated near-term remedy is to install metal “cliff edge barriers” at targeted locations prior to hurricane landfall.

Nuclear plants must be shut down at least 2 hours before winds of 73-plus miles per hour are expected. EIA tracks nuclear outages here.

We have some further idea about the potential for electricity infrastructure exposure to storm surge in the area as three years ago, my colleagues and I conducted an analysis to examine this issue at five sites along the East and Gulf coasts—including Charleston and the South Carolina Lowcountry, and Norfolk and Southeastern Virginia. Our analysis focused on power plants and substations in particular, recognizing that many of these long-lived pieces of infrastructure, which are centrally important to the power grid, are already exposed to flood risks and will face increasing levels of exposure as seas rise.

Critically, although much of this infrastructure is fixed in location, utilities can take proactive measures to reduce vulnerability to exposure such as by elevating assets or equipping them with flood-protection safeguards. Even de-energising a substation before it floods can make a big difference in repair times, given the comparative calamity of equipment that gets flooded while electricity is still coursing through.

But as we know from past storms, outages are not only related to infrastructure on the ground; they’re commonly caused by downed wires and poles from things like falling trees and flying debris. Vegetation management, select undergrounding, use of smart grid equipment, and grid hardening can all help to limit the scale and duration of outages.

Finally, when utilities anticipate storm damage, they call on others to help. For example, Duke Energy, bracing for outages worse than those sustained from 2016’s Hurricane Matthew, has called on trucks and crews from outside the region to help assist with their work. The addition of crews can substantially quicken repairs, and mutual aid is an increasingly important factor in successful outage response.

But despite planning, investments, and proactive work, it’s still prudent to expect that outages will occur.

As a result, as power outages mount, communication with customers is key. In particular, emergency responders and other critical services must not only be kept aware of their own status, but also that of the facilities and populations most vulnerable should an outage occur. Such tightly coupled communications can help prevent loss of life.

Utilities should further strive to provide robust communications to general customers, including estimates of when power will be returned. In a recent review of Florida’s electric utility hurricane preparedness and restoration actions, the state’s Public Service Commission found that communication issues were a “notable source” of customer dissatisfaction and frustration in the aftermath of Hurricane Irma. Because so many decisions hinge on whether or not the power is on and when it will be coming back, that communication is key.

About the Union of Concerned Scientist

The Union of Concerned Scientists is a nonprofit science advocacy organization based in the United States. The UCS membership includes many private citizens in addition to professional scientists.

JULIE MCNAMARA is an energy analyst with the Climate & Energy program at the Union of Concerned Scientists, where she analyzes state, regional, and national policies relating to clean energy development and deployment.