The number of passenger electric vehicles sold in 2021 will hit 5.6 million units, according to a new study released by BloombergNEF at the request of the UK COP26 presidency.

The milestone will mark an 80% jump in sales, according to the study. The increase in the adoption of passenger electric vehicles is owing to commitments by industry and governments globally over the past two years as calls for decarbonisation and electrification of the transport sector intensify, according to the 2021 Electric Vehicle Outlook.

In addition, increased focus by stakeholders in the energy and automaker sector to increase the number of electric vehicle charging infrastructure can be attributed to the increase in use, one can argue. The lack of charging stations has over the past few years hindered the use of electric vehicles. 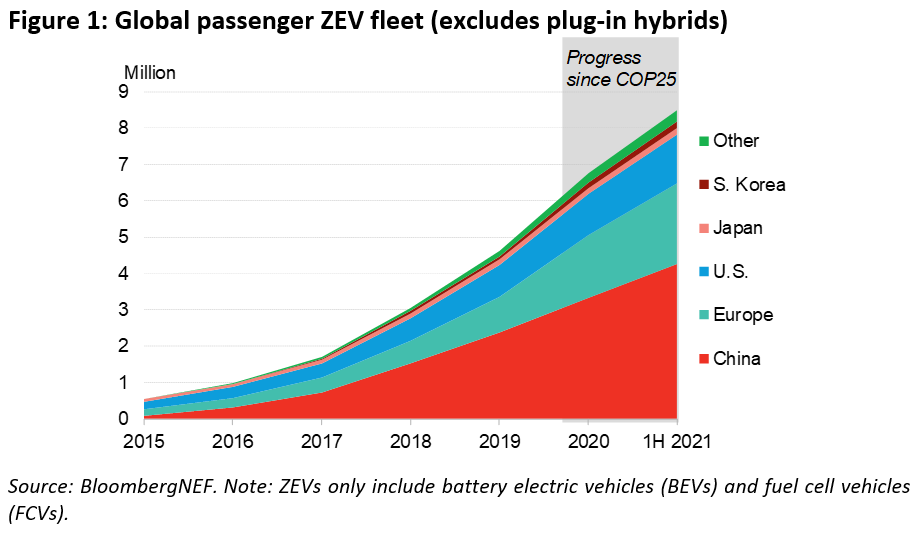 The global battery electric vehicles and fuel cell vehicles fleet will reach 677 million units by 2040. This is supported by the International Energy Agency and the Petroleum Exporting Countries who are also predicting the global ZEV fleet to increase by 7% and 11%, respectively, by 2040 compared to 2019 levels.

Factors including improving battery technology and costs, faster roll-outs of charging infrastructure, a wider range of vehicle models on offer to customers, and longer range and faster-charging speeds available on the newest vehicles are expected to drive the global market for smart vehicles.

Shapps added that to achieve net-zero goals and to increase the number of green jobs, governments and stakeholders need to come together behind 100% zero-emission vehicles sales by 2040.

BNEF states that automakers committed to reaching 100% zero-emission vehicle sales by 2035 account for 32% of the global auto market.

Aleksandra O’Donovan, electric vehicle analyst at BloombergNEF and lead author of the report, added: “Sales of internal combustion engine vehicles need to stop around 2035 to get global road transport to net-zero by 2050.”

Find out more about the report.