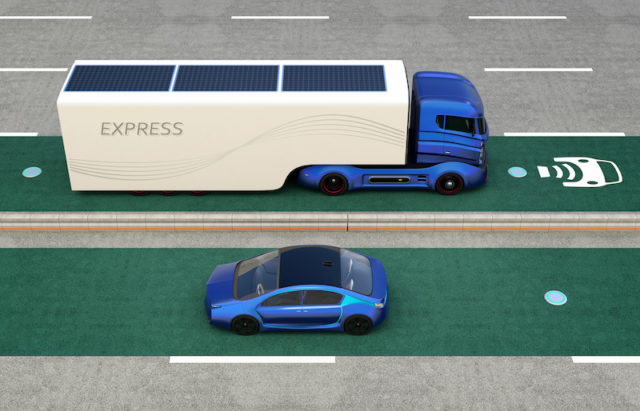 As the uptake of electric vehicles in Europe increases, authorities are considering alternative forms of charging infrastructure for these vehicles.

Recently, it was announced that the Swedish Transport Administration has partnered with Smart Road Gotland to construct an inductive or wireless electric vehicle (EV) charging system pilot project. The pilot will include the construction of a 1,6km electric road between the airport and the city centre of Visby and the rollout of a public shuttle service and an electric shuttle.

Compatible with all types of EVs, the smart road will have coils deployed 8cm under the surface and will be activated only when corresponding vehicles drive on the road.

The project is claimed to be will the first in the world to charge both electric trucks and buses while they are in full motion. The system utilises induction charging.

The initiative is part of the Swedish government’s national roadmap for electric road systems. The system will be in various seasonal conditions before nationwide deployment.

“The wireless electric road technology makes it possible to electrify truck fleets economically without the need to carry huge batteries and stop for charging and without creating a visual hazard,” commented Oren Ezer, CEO of , one of the suppliers to the pilot.

Meanwhile, in March this year, Norway’s Fortum announced it was working to provide wireless charging to taxis within Oslo, saying that the company “aims to install wireless charging using induction technology. Charging plates are installed in the ground where the taxi is parked and a receiver is installed in the taxi. This allows for charging up to 75 kilowatts. The project will be the first wireless fast-charging infrastructure for electric taxis anywhere in the world, and will also help the further development of wireless charging technology for all EV drivers.

“Fortum Charge & Drive has long been working with the taxi industry to enable electrification of the taxi fleet. The greatest hurdle has proved to be the infrastructure: It is too time-consuming for taxi drivers to find a charger, plug in and then wait for the car to charge. The wireless fast-charging project aims to solve these issues and thereby reduce climate emissions from the taxi sector – not only in Norway but in the entire world.”

In 2017 Scientific America wrote that Israel is “investing in roads that power electric buses — as they ride down the street. The government is collaborating with Israeli start-up ElectRoad to install a public bus route in Tel Aviv, using an under-the-pavement wireless technology that eliminates the need for plug-in recharging stations.”

Induction charging addresses one of the biggest concerns the electric vehicle owners have – that of limited range.  Yet the cost and the reliability of the technology in a variety of weather conditions is still very much under investigation.

Of course, for utilities and cities, one of the biggest challenges, once the technology is proven, will be – how do you charge for the road use and charging?

Other questions that spring to mind include: Who owns the data and where is the control technology located – in the vehicle or the road? If in the vehicle, what are the privacy and security implications? How can the utility or city be sure that the control sensors are not being tampered with? What if you don’t want to charge your vehicle as you drive over that section of road, and how far do you have to drive to ensure a sufficient charge? In fact, what is a sufficient charge?

Each of these questions brings up a slew of concerns, points of debate and considerations apart from the logistics of the technology or the cost of the road infrastructure. Additionally, what are the implications for battery life and recharge lifespan?

Do you have answers to any of these questions? Do you have an opinion on ’smart’ roads and inductive charging while driving? Share your thoughts with us here.