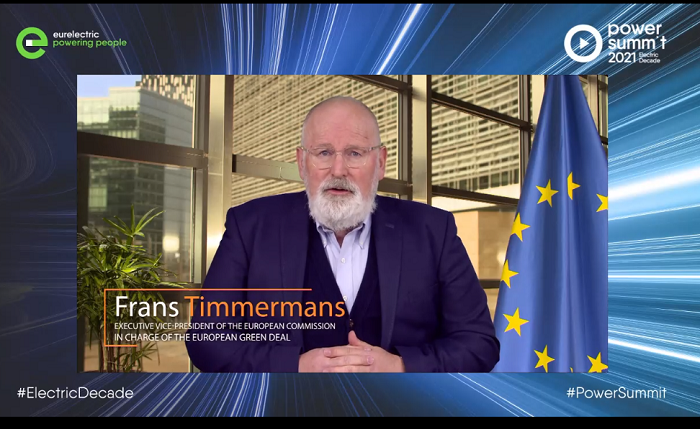 “The European energy sector is poised for an industrial revolution “comparable to the jump we made when James Watt invented the steam engine”.

Delivering a speech in Brussels, he said the coronavirus pandemic “is teaching us a harsh lesson about the fragility of us as human beings… but it’s a lesson we must heed if we are to tackle to climate crisis”.

“There is no vaccine for the climate or biodiversity crisis, but there is a way out – and our launch pad to a better future for our children and grandchildren is the energy sector.”

Timmermans said that when the EU launched the Green Deal, “it was relatively lonely on the world stage. But more than one year later, we have been joined by many others in the race for net zero.”

And he stressed that it was “a race we can all win – but we still run the risk of it all slipping through our fingers. Of easing back into ‘business as usual’, simply because it is the comfortable thing to do. So the urgency of acting on our commitment is high.”

Speaking at the launch of the Eurelectric Power Summit, he said the EU had 1.8 trillion euros “to bounce back from the Covid crisis and restart the European economy”. And he added that “30 per cent of those funds must go to climate action”.

“Energy is responsible for 75% of greenhouse gas emissions – there is no credible path to climate neutrality without deep decarbonisation of our energy system. This will require unprecedented investment in renewables, hydrogen production, building refurbishments and electric transport.”

Have you read?
‘Electricity at the heart of saving the planet’ says Eurelectric president
Recent energy transitions point way to an ‘Electric Decade’ ahead

However, he stressed that these investments “will pay back and bring new jobs and a more sustainable market for our goods”.

He said the decarbonisation of Europe will follow two parallel tracks: firstly, a move towards greater energy efficiency – “we must leave no molecule or electron to waste” – and secondly, a move away from fossil fuels.

And he added that “above all, we have to integrate sectors: power generation, buildings, transport and industry, into one energy system”.

“This is in many ways a Herculean task – but it is feasible. But to get there the pace of electrification must quadruple in the next ten years. In the next decade, Europe needs to double its renewables capacity from 420 GW in 2020 to 840 GW by 2030.”

He said there would also be a need for “unprecedented investments” in the grid to connect new wind farms, fleets of electric vehicles, and electrolysers for renewable hydrogen.

“We will need to jump higher than we’ve ever jumped before. The good news is that there are also immense opportunities for investment and economic growth.

“The scale of the change we will need is comparable to the jump we made when James Watt invented the steam engine.”

Timmermans concluded his speech by highlighting how “fossil fuels have been the backbone of Europe growth since the 18th century. Now the renewables revolution is taking over. They already produce the cheapest power humanity has ever seen. That’s a pretty good starting point if you ask me.”

The Eurelectric Power Summit continues each day this week. Click here for details and to watch: https://powersummit2021.eurelectric.org/