"We have bought what we needed to create a leading company and now we cover all the areas of products, systems, services and total solutions.” It all started in 2002, with the founding of the Bayard Group in Australia by media executive and entrepreneur Cameron O’Reilly with a group of investors, with the aim of building a company to leverage the opportunities caused by rising energy prices, increasing environmental regulations, shortages of energy and water, and rapid technological advances to help conserve the increasingly scarce energy and water resources.

Bayard’s first acquisition, in 2003, was the Australian metering system developer Email Metering, which brought with it its UK subsidiary Ampy Metering. This was followed a year later with the acquisition of the leading meter manufacturer Landis+Gyr, headquartered in Switzerland with operations across the globe. Bayard then moved to raise further financial capital and over the period of the following year proceeded to acquire three further companies – Hunt Technologies, a leading US developer of AMI solutions, the Enermet Group Oy, a Nordic developer and supplier of advanced metering systems, and Cellnet, a US-based utility communication and automation solutions provider.

“I believe we have a nice group of companies,” says Umbach, adding that these fit the vision for the Group – of providing the complete advanced metering offering on a global basis. Though there may be the possibility of some small technologically related acquisitions in the future, there will be nothing major.

For the record the numbers are impressive: In 2006 sales totalled €828 million with earnings before tax of €130 million and the employee base was 4,800 in 45 operative units on all continents. By 2008 Umbach expects the group to surpass €1 billion in sales. Umbach explains that structurally the companies have been aligned but remain independent – except in the case of Cellnet and Hunt, which recently combined their business operations under the name Cellnet+Hunt and now operate as the AMI business in the US. “All acquisitions have been integrated into the Landis+Gyr management structure, but the businesses continue operating with their independent identity and branding.”

But, he continues, there may be some changes in the future as the next major step for the Group as a whole will be a stock exchange listing, probably in the US, to provide a strong platform for future growth.

“It hasn’t been decided yet what brand and identity we will list under and we will be working on that in the coming year,” says Umbach.

Turning to Bayard’s product line, Umbach comments that the range is comprehensive, and while some products are aimed at specific markets, because of for example the specific market demands or standards, it is the intention to “have the full range of products and systems in every market.”

As an example he cites the ecoMeter – a home energy monitor that was developed by Ampy in Australia in response to demands for consumer-friendly energy information there, and that was launched into Europe at Metering, Billing/CRM Europe in Vienna, Austria in October. In a pilot the ecoMeter demonstrated a 50 kW (30 percent) reduction in peak kW demand.

“We see transparency of information, real time or near real time, and interaction through two-way communication as keys for repositioning utility and energy services and driving energy efficiency in the home.”

The Bayard Group devotes significant resources to R&D – over 5 percent of sales – and has some 600 people working in this area. New products, whether an upgrade of an existing product or “blue sky”, are planned groupwide, and the aim is to move towards “global platforms” that can be adapted and customised locally. 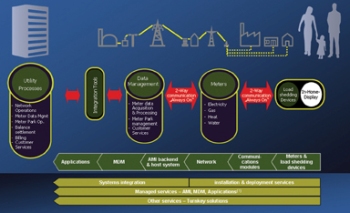 Indeed in practice most products now require a high degree of customisation, right down to the customer specific level, Umbach notes. Umbach says the main R&D thrust is in moving the meter from an independent unit to part of an integrated system. “In the past the meter was regarded as an isolated cash register but it is now becoming a key component in an advanced process with a wide range of additional benefits that were never thought of before.”

All of this is enabled with communications, which Umbach describes as “the backbone to the household for the utility,” as well as advanced software, which he comments is becoming increasingly a key driver of product development.

Says Umbach: “The utility of today provides energy but the utility of tomorrow will provide energy management services – and we want to be offering those services.”