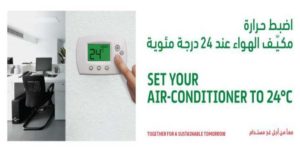 In the Middle East, Dubai Electricity and Water Authority (DEWA) has extended an energy efficiency campaign to the commercial sector, the latest in a series of initiatives by the utility to manage electricity demand and curb consumption.

“Set your AC to 24 degrees celsius” is an annual campaign to raise awareness of rationalising power and water consumption but has been targeted at the commercial sector for the first time.

The campaign encourages consumers to adopt environmentally-friendly lifestyles at their homes and workplaces by setting their air conditioning to 24°C.

The move would help reduce power consumption and carbon dioxide emissions as well as enable consumers to achieve financial savings, especially as air conditioning consumes a large percentage of energy in commercial properties.

H.E. Saeed Mohammed Al Tayer, chief executive of DEWA, said: “DEWA’s awareness campaigns have achieved remarkable results. Between 2009 and 2013, we managed to reduce electricity consumption to about 1,012 GW/h of electricity, and 4.9bn gallons of water, eliminating the release of 466,000 tons of carbon dioxide emissions. This helped save about Arab Emirates Dirham 622 million (US$169 millon).”

“The Set your AC to 24°C campaign has been extended to the commercial sector after the success of last year’s campaign, which was just focused on to the residential sector.”

In an initiative earlier this week, DEWA launched a consumer exhibition for eco-friendly appliances with the aim of offering energy-efficient home appliances at discounted rates through partnerships with manufacturers and distributors, forming part of DEWA’s outreach campaigns to rationalise electricity and water use and support environmental sustainability, the utility said.

DEWA is also working as part of the Dubai Smart City initiative to replace all electromechanical and mechanical water and gas meters.

The utility has developed a five-year plan to complete the project, which is estimated will cost AED7 billion (US$1.9 billion), with a dedicated DEWA team replacing 250,000 meters in the residential, industrial and commercial sectors.