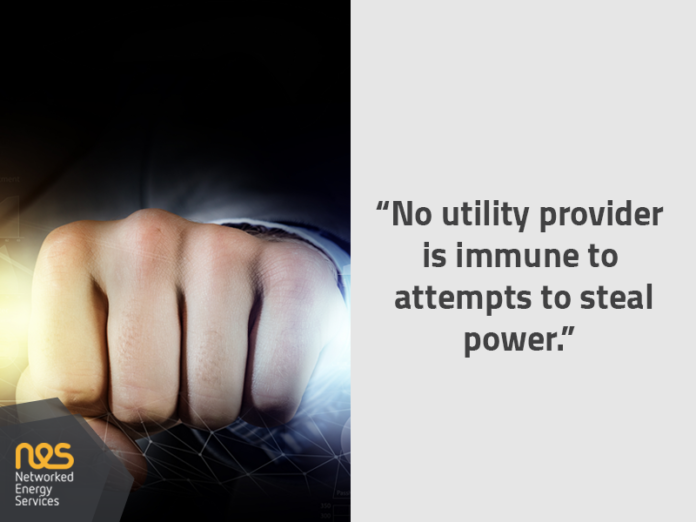 Power theft is the menace of electric utilities from rural cooperatives to large investor-owned and municipal providers. Utility companies have been plagued with non-technical losses almost since their inception.

As early as 1899, the Association of Edison Illuminating Companies addressed the problem of tampering with screws that adjusted meter damping magnets.

Over 36 years ago in 1984, the New York Times published an article1 citing ConEd and the potential of “1% of power customers of stealing services.” As power generation and electric utility proliferation moved into developing countries, many more providers confronted new challenges and obstacles to combat non-technical losses and the issues it causes.  No utility provider is immune to attempts to steal power.

Non-payment refers to customers who are unable or unwilling to pay for their electricity, which can lead to significant revenue loss if the utility fails to handle nonpayment situations quickly. However, electricity theft usually impacts a utility more than non-payment problems.

Until recently, there were few effective solutions for this problem. Labor-intensive premise inspections and account auditing often costs more than the actual value of the losses, enforcement is always challenging, and previously Advanced Metering Infrastructure (AMI) was not cost effective in many countries. Regulators typically do not require utilities to absorb the costs. Instead, electricity ratepayers subsidize the thievery.  So non-technical losses are often hidden costs and have received little public attention, but they have enormous costs for utilities, customers and governments. The idea that energy theft is a victimless crime is clearly wrong.

According to estimates, theft and fraud of electricity costs the industry as much as $96 billion2 every year globally, with as much as $6 billion3 every year in the United States alone. This $96 billion global problem not only results in higher prices for paying customers and costly government subsidies but is also a public safety crisis in some countries with dangerous illegal power connections. In many countries, high non-technical losses threaten the financial sustainability of the energy utilities.

Meanwhile the issue of theft and fraud leaves utility managers with a powerless feeling in their ability to prevent or confront the issue. However, this trend is rapidly changing. Utilities now have many tools to reign in losses and detect unauthorized theft and fraud before it creates a significant drain on resources and company revenue. Many of these tools are provided through the installation of AMI and the additional visibility of the low-voltage grid that these systems provide.

They are caused by actions external to the power system and consist primarily of electricity theft, non – payment by customers, and errors in accounting and record – keeping.

Metering and billing for electricity actually consumed by users is integral to commercial management of an electricity utility.

Electricity theft is nothing new and can be a complex phenomenon with many facets. Theft of power is common in many countries and a considerable amount of energy is stolen every year from the electric low voltage grid. An electric utility low voltage grid can never be one hundred percent secure from theft and fraud due to the number of distributed end points which sit largely unmonitored in public accessible locations.

The problem has socioeconomic, political, environmental and technical roots, but the solution is generally sought solely through technical measures. In many systems the amount of energy theft is relatively small (1–2%) in terms of the electricity generated. But, the financial loss is high due to the large amount of electricity being distributed.

The financial losses are critical to many electric power utilities. Lost earnings can result in lack of profits, shortage of funds for investment in power system capacity and improvement, and a necessity to expand generating capacity to cope with the non-technical losses. Some electric utility companies in the worst affected countries are near bankrupt from the impact of year over year losses.

Many electric utilities are embarking on specific programs to reduce electric energy losses on their low voltage grids, both as a measure of energy conservation and as an alternative to adding generation capacities. One of the primary sales drivers for advanced AMI systems during the last few years has been the potential to reduce non-technical losses from a theft and fraud prospective. The upward industry trend seems to be that more and more utilities seek the ability for much more stringent practices in theft detection and ability to discover fraud.

Types of Theft and Frauds

There are four types of “theft/Fraud” prevalent in all power low voltage grid systems. The extent of the theft will depend upon a variety of factors—from cultural to how the power utility is managed.

1. Fraud – Fraud is when the consumer deliberately tries to deceive the utility. A common traditional practice is to manipulate or physically tamper with the meter so that a lower readings of power use are shown than is the actual consumption case.

Consequently, in new smart AMI technology systems, usage data may be vulnerable to being tampered with before/after recording or in transmission to utilities. Moreover, software -based attacks often require less expertise to execute and thus are likely to have the potential to be more widespread and frequent into the future.

Precedence and history have shown that these types of software attacks are quickly monetized by criminal organizations, often disguised as legitimate businesses that sell the hardware and software needed for theft of service.

For instance, look at the Black-box tone generator of the 1980’s providing the ability to make free local and long distance calls by using a cheaply made device to generate the phone switch tones necessary to steal service.  Then, in the 1990’s, came the cable television descrambler box that lead to over $4 billion in cable theft per year, and currently, there are websites that sell SIM unlock codes for cellular phones.

Often, these organizations use a cash only or digital cryptocurrencies to process transactions affording them anonymity and a difficult traceable money trail.

2. Stealing Electricity – Electricity theft can be arranged by rigging a line from the power source to where it is needed, bypassing the meter.  In Mexico, there have been a high volume of illegal customers, who steal electricity with wires known as pequeño diablos or ‘little devils.’  The illegal lines are easy to detect as they are often above ground and highly visible. However, reports of utility staff being assaulted and needing police security to carry out the removal of the lines are common place. Published reports say the theft in Mexico result in the yearly loss of as much as $1.3 billion4 in revenues annually.

Corrupt staff from the electricity organization may take bribes to allow the practice to continue. On a larger scale, businesses may bribe power organization staff to rig direct lines to their buildings or offices and the power does not go through a meter. Money also can be given to inspectors to keep them from finding and/or reporting the theft.

3. Billing Irregularities – This can occur from several sources. Some power organizations may not be very effective in measuring the amount of electricity used and unintentionally can give a higher or lower figure than the accurate one. The unintentional irregularities may even out over time. However, it is also very easy in some systems to arrange for much lower bills to be given than for the power actually used.

Employees may be bribed to record the meter at a lower number than is shown. The consumer pays the lower bill and the meter-reader earns unofficial salary. In another type of billing irregularity, office staff can move the decimal point to the left on the bill so that a person or company pays $47.48 instead of $474.80. Consumers may know that some power organization staff are ‘‘on-the-take’’ for providing these services.

4. Unpaid Bills – Some people and organizations do not pay what they owe for electricity. Residential or business consumers may have left the city or an enterprise has gone bankrupt. Some systems have chronic non-payers—the very rich and politically powerful who know that their electricity will not be cut regardless of whether they pay or not. An example of this could be an airport in an exotic tourist destination, that owes the utility millions of dollars in debt, yet because of the nature and necessity of the business of tourism and the effects on the overall economic impact, this loss rarely is looked at as theft.