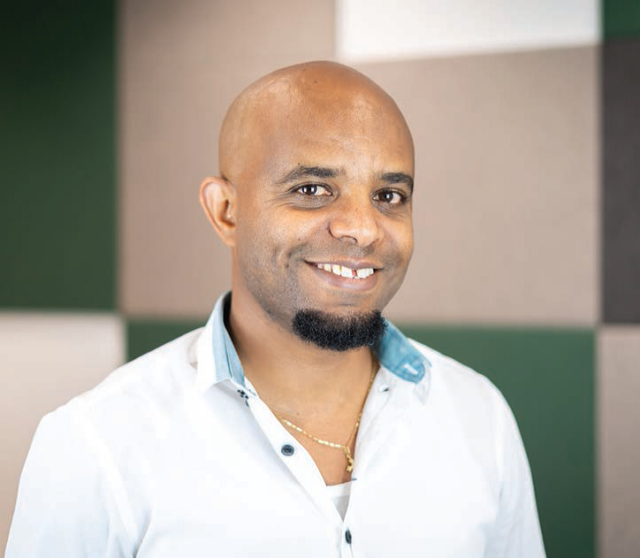 Biniam Haddish is a former refugee from Eritrea in East Africa who now holds a senior position at National Grid Energy System Operator in the UK. He tells us his story.

I was January 2006 and we were travelling on foot under the cover of darkness. We could only travel between the hours of two and five in the morning for fear of being spotted by soldiers or passers-by.

The route we were on was chosen specifically by the people smuggling us to avoid detection and mostly took us through rural villages and farms.

This article was originally published in Smart Energy International issue 1-2020 and appeared in the PEI – Supplement. Read the full digimag here or subscribe to receive a print copy here.

The small group I was with consisted of myself and three other men. We’d been told that we would be escorted to the border by a smuggler, but to protect his identity he pretended to be a migrant.

It took a total of eight days and nights to walk 270km across the width of Eritrea and into Sudan. Crossing the border, we were met by the Sudanese military. It was a tense moment – it wasn’t until very recently that Eritreans were freely allowed to leave the country without the risk of being shot – but we explained we were fleeing from Eritrea and were handed over to the UNHCR, the United Nations High Commissioner for Refugees, before being taken to a Sudanese refugee camp to be processed.

Perhaps I was being paranoid, perhaps it was nothing, but I’d heard stories of other Eritreans who had made the same journey being identified, arrested and taken back across the border. I was worried there would be spies embedded in the camp so, shortly after completing my paperwork, I fled once again, this time to Khartoum, the capital city of Sudan. I was more fortunate on this leg and managed to hitchhike part of the way.

It was a long and lonely journey, but one that gave me time to reflect on the gravity of leaving my family behind, many of whom were also in forced jobs. Growing up, I had a normal childhood like anyone else. I went to school, passed my high school matriculation exams and showed an interest in physics and mathematics.

Straight after leaving high school, I had spent four months at SAWA military academy. After completing this basic military training, I was allowed to pursue further education in the University of Asmara after passing my matriculation exam. Perhaps because the alternative is so unappealing to so many people, competition to get into university is tough.

Around 8000 students apply to the University of Asmara that year and some 1200 pass the entrance exam, with approximately 500 being offered a place on the degree courses. I passed the entrance exam and started a degree in electrical and electronic engineering in September 2000 after completing my freshman year.

Before I could graduate, however, I had to do another year of national service. After completion, my degree helped me to avoid harsh military service and I was assigned a civil service job in the Eritrean Electricity Authority. At the time, those with a degree could expect to earn less than £1/hour, with the caveat that they would be kept on standby for the military reserve.

My prospects were bleak. I had been given a taste for technology and I wanted more. The idea of spending the rest of my life in what effectively amounted to forced labour was not promising. I was 24 years old, ambitious and ready to succeed. So, despite the difficulty of my predicament, one thing I knew was that I had made the right choice to flee.

I won’t go into detail on how I crossed the border into the UK, but it is a treacherous journey. It has been well documented in recent years how migrants have died jumping on and off moving lorries or concealing themselves in the axles under the vehicle.

In the UK, I applied to the Home Office for asylum and was granted refugee status with leave to remain for five years. I was also shocked to see how diverse the UK is.

Coming from a country where everyone speaks the same language, eats the same food and has the same cultural background, it was initially overwhelming to see such a diverse society.

Past the initial shock, I had a hard time finding a job. Having a degree from back home was almost worthless and professional careers advice was not readily available. The Job Centre pushed me to apply for whatever was available, despite the fact nothing suited my skills, so I began doing low paid work in a biscuit factory picking and packing stock.

Around Christmas time, I waited tables at Christmas parties.

Throughout this time I continued to look for ways to joined the skilled workforce. Then, living in Leeds, I went to the central library and, not knowing what Universities and Colleges Admissions Service (UCAS) was, I began searching for the emails of admission offices and sending out speculative letters. After several failed attempts, I got a response from Manchester and Bradford University inviting me to their open days, where they explained how the UCAS process works.

I joined Bradford University in September 2007, starting my Bachelor degree in Electronic, Telecommunications and Internet Engineering. A week into the course, I realised that it was too basic compared to what I had already studied. I asked to start on the second year and my request was approved. Two years later, I finished the BEng degree with first class honours and continued onto an MEng Masters degree, graduating in 2011.

Having completed three degrees at this point, you would think my struggles would be over, but with only a year left on my visa, I hit another setback. Employers were either reluctant or unable to offer a job without a guarantee that I could remain in the UK.

I put in an application for indefinite leave to remain (ILR) and went back to the biscuit factory while I waited to hear of my fate. I was eventually granted the ILR and set about the arduous task of redefining myself as a person.

I approached Transitions London, a company that supports refugees by giving them training with CVs, cover letter writing and interview techniques.

They helped me figure out what employers are looking for and how to do well in face-to-face interactions and over the phone.

Equipped with the right skills, I now began the herculean task of passing through the graduate scheme application processes of many of the UK’s big companies. These are longwinded and often very competitive, requiring graduates to pass through countless hurdles such as online language tests, telephone interviews, multi-day assessments, face-to-face interviews, presentations and group activities.

Once I’d completed a few of these, I began to receive offers and was ultimately accepted to join National Grid. I joined the company in September 2012 as a graduate and carried out three six-month rotations in areas such as Capital Delivery, Asset Management and the Electricity System Operator.

In these roles, I covered everything from supporting the delivery of construction designs as a development engineer, to working on the outage planning team, where I worked as a power system engineer, delivering scheduled outages for maintenance and capital investments.

As the electricity system operator for Great Britain, National Grid ESO moves electricity safely, reliably and efficiently through the system, to ensure homes and businesses have the power they need whenever it’s needed.

It might sound simple, but it’s a complicated job to deliver electricity every single minute of every single day, making sure that demand and supply are always balanced.

In April 2017, after three years as an outage planning engineer, I moved onto the generator compliance team and this is where I currently work as a senior compliance engineer. My day to day role involves supporting generators through the compliance process by facilitating their connection to the transmission network.

I’m currently working on my dissertation for a Master’s degree in Power Systems Engineering from the University of Manchester. I’m doing this part-time alongside work commitments. In January this year I also became a chartered engineer, awarded by the Institution of Engineering and Technology.

I have a wife and two children, and after over a decade of struggle, I finally feel at home, in a workplace that actively promotes diversity and inclusivity. To play my part in helping the community, I recently set up an organisation that supports highly skilled refugees to join the skilled work force in the UK.

It’s called the Professional Immigrants Transition Platform and helps refugees who are struggling to get a job in the UK.

They may typically have a degree from back home, so we help them to pursue further education where necessary and build interview and CV skills. Beyond this, I want to motivate them and give them hope that one day they will find a job.

We also want to raise awareness with employers that refugees have international skills and knowledge with an ambition to be successful in life.

This is an unexplored pool of expertise that employers could use as another avenue of recruitment. PEI