Utilities companies are considering the potential benefits of smart meters and their impact on consumer choices. Will smart meters encourage consumers to make ‘smarter’ choices in responding to electricity price signals? Will those choices impact their consumption patterns – and what economic benefits will follow? And how should smart meters and other enabling technology be considered in a broader demand response context? Several motivators have come together to drive this growing interest in smart meters and consumer behaviour:

• Public policies to support energy efficiency, demand response, and conservation. Examples in the United States include the Energy Policy Act of 2005 (EPACT), the Environmental Protection Agency, and state-specific initiatives such as California’s smart meter programme.
• Growing consumer interest. Consumers want access to ‘smart’ tools to manage energy use and reduce costs, particularly in response to high and volatile fuel prices but also because of a growing interest in conserving energy.
• Utility objectives for operational efficiency. Targeted demand response will provide some operational flexibility. The smart metering platform and associated communications infrastructure can provide significant operational benefits, including improved productivity.
• A platform for additional consumer options. Coupling smart meters with other technology will enable the evelopment of customer energy management options beyond critical peak pricing and time-of-use pricing to drive even greater benefits to consumers and utilities. 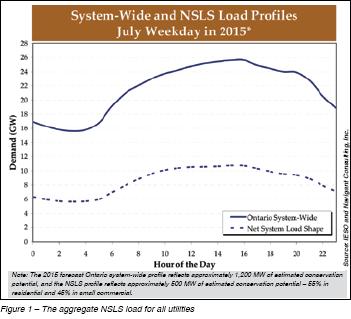 A recent analysis of the impact of smart meters and time-of-use rates on Ontario residences and businesses provides a helpful first look into the possible load management benefits of smart metering. The analysis also lends insight into the synergistic role of smart meters in conservation and demand response. Smart meters will allow consumers to respond to electricity price signals and can provide a dramatic impact on the system load profile. A co-ordinated and effective implementation plan is necessary to maximise those benefits. It is helpful to note that Ontario and California represent the two largest advanced metering initiatives under way, thus providing good learning opportunities. 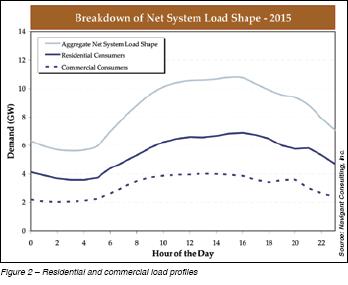 To encourage conservation and demand response among consumers, the Ontario provincial government has established a policy for smart meters to be installed for all consumers by 2010. If this aggressive timetable is met, Ontario will be the first jurisdiction in North America to have such an advanced meter infrastructure (AMI) across the entire customer base.

Time-of-use (TOU) rates were used in analysing the benefits of smart meters for Ontario consumers, because they represent a base response. The analysis could have examined more complex pricing options, such as critical peak pricing (CPP) but those options are generally some variant of TOU pricing. So while CPP and other forms of pricing are likely to yield a higher or more targeted response from consumers, TOU pricing represents a conservative base case for the purposes of this analysis.

Moreover, under the Ontario Energy Board’s Regulated Price Plan, all consumers with smart meters are being charged TOU rates as from May 1, 2006. However, no decision has been made yet regarding CPP or other innovative rate schedules. In the Ontario analysis, four key inputs were used to estimate the potential impact of smart meters and TOU rates on the consumption pattern of consumers: sectoral load profiles; time-of-use prices; time-of-use periods; and elasticity estimates by sector. 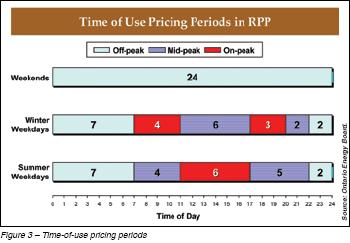 It is important to isolate the electricity consumption pattern for those consumers who will receive smart meters, because their pattern may differ from the overall system. For example, in Ontario the overall shape of the pattern of consumption includes residences, industries, and universities. However, the targeted recipients of smart meters in Ontario are residences and small commercial facilities and, as such, they have a very different pattern than does the region as a whole, which is why it is important to understand their profile. And that profile will influence how the other three factors – TOU prices, TOU periods, and elasticity – affect the results.

A forecast of the overall system-wide load profile for Ontario was provided by the Independent Electricity System Operator (IESO). The profile is based on the most recent ten-year outlook, median growth, and normal weather peak demand scenario. The forecast system peak for a normal July weekday in 2015 is approximately 26,000 MW. In Ontario, the load profile for customers who will receive smart meters is represented by each local utility’s Net System Load Shape (NSLS), which is simply the utility’s total load less the combined load of all customers that already have interval meters. The aggregate NSLS load for all utilities represents just over 40% of the overall system demand (see Figure 1).

Smart meter benefits will flow from consumer response to TOU price signals. The time periods for which the three different TOU prices would apply – off-peak, mid-peak, and on-peak – are based on the Ontario Energy Board’s Regulated Price Plan (see Figure 3). These time periods are assumed to remain unchanged over the analysis period, as is the relative ratio of the prices for the three periods (an approximate 1/2/3 ratio). In other words, mid-peak prices are assumed to be approximately double the off-peak prices, and on-peak prices are assumed to be approximately triple the off-peak prices. Note that these prices used in our analysis are for the commodity only. 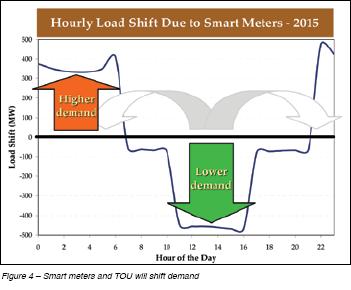 Further analysis could reflect the all-in price of electricity, incorporating transmission and distribution charges, but it is possible that a significant component of these charges may ultimately be time varying. Hence our analysis focused on relative commodity prices in the different TOU periods. As shown in Figure 3, off-peak prices apply in all weekend hours and from 10 pm to 7 am on weekdays. Outside these hours, on-peak and mid-peak prices are applied at different times, depending on the season. Under the TOU price structure, the year is split into two “seasons,” winter or summer.

Offering consumers an opportunity to respond to electricity price signals promotes load shifting. The responsiveness of consumers to price changes is measured by their price elasticity of demand. For example, ‘elasticity of substitution’ is one form of elasticity that relates to a consumer’s shift in consumption across time periods (such as on-peak to offpeak) in response to price differentials for the time periods. For example, if the cost of electricity is $0.10/kWh before 5 pm, and $0.20/kWh after 5 pm, how will that influence the consumer’s behaviour? And how much would an even greater price differential affect consumer choices? Experience indicates that changes in consumption patterns are driven by:

In our analysis, however, we assume that average per capita consumption is kept the same. Hence these results are conservative, in that they do not reflect the expected conservation impact from higher on-peak prices. Based on previous work that we have done, the savings for this level of load shifting in 2015 are estimated to be approximately $100 million. Expressed another way, the estimated reduction in peak demand would eliminate the need for a new 500 MW generation facility that would otherwise be required to serve customer growth or replace ageing plants. In addition, we identified that the smart meters and associated communications infrastructure would provide significant operational benefits and cost savings to the utilities.

Smart meters need ‘smart rates’ to encourage customer response. Regardless of whether they are based on realtime prices, spot prices, or a regulated rate structure, these smart rates will follow a regular TOU pattern and may be augmented with occasional periods of very high prices. Our analysis indicates that the introduction of TOU rates in Ontario will have a dramatic impact on the overall system load profile. For this reason, understanding how customers in a region will respond to TOU rates should be a key element of the economic assessment of advanced metering technology, along with an understanding of other pricing structures such as CPP, and the utility operational benefits. Additionally, all utilities would benefit by taking a step back to determine how smart meters and TOU rates – and other innovative tools – could support the provision of energy efficiency and enhanced energy services that benefit the customer and utility alike. However, a co-ordinated and effective implementation and communication plan will be necessary to maximise those benefits.