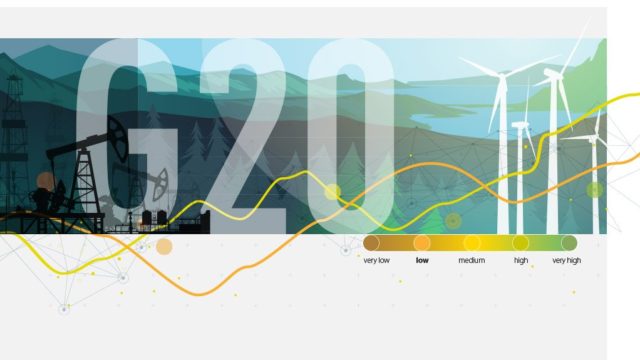 The Climate Transparency partnership, international research collaboration has released the findings of a study conducted to understand measures put in place by G20 countries to mitigate climate change.

The report ‘Brown to Green Report 2019′ reveals that carbon emissions from the world’s 20 biggest economies continue to rise.

None of the G20 countries have plans that will put them on track to limit global warming to 1.5°C, despite the fact that most are technically capable and have economic incentives, and South Korea, Canada and Australia are the G20 countries furthest off track from implementing their already unambitious NDCs.

To keep the Paris Agreement’s 1.5°C goal within reach, G20 countries will have to increase their 2030 emission targets by 2020 and significantly scale up mitigation, adaptation and finance over the next decade.

The report is the most comprehensive review of G20 countries’ climate performance, mapping achievements and drawbacks in their efforts to reduce emissions, adapt to climate impacts and green the financial system.

Many of the current 2030 climate targets under the Paris Agreement (Nationally Determined Contributions – NDCs) are too weak, with about half of the G20 countries projected to meet or overachieve their inadequate NDCs. There is plenty of room for enhanced ambition among all G20 countries. “Just one year before the critical deadline the findings give us hope that countries will find the political will to commit to higher emission reduction targets in 2020 as they promised under the Paris Agreement”, says Alvaro Umaña, the Co-Chair of Climate Transparency and Former Minister of Environment and Energy of Costa Rica.

“For the first time, the report identifies untapped potential and key opportunities for countries to ramp up ambition and as such will be a valuable tool for governments when they update their climate plans.”

Key findings for the G20:

“Overall CO2 emissions go up in all sectors, but we’re seeing some frontrunners emerging that others can learn from, like China’s policies for promoting electric vehicles and public transport”, says Lena Donat, one of the report’s lead authors.

“In order for the Paris Agreement to succeed, it is clear that the G20 countries need to be climate leaders and pave the way for solutions that developing countries can benefit from.”

The G20 countries are responsible for approximately 80% of global GHG emissions. This year’s report analyses G20 countries’ performance along 80 indicators for climate mitigation, finance and adaptation against global 1.5°C benchmarks. The 2019 report “Brown to Green: The G20 transition towards a net-zero emissions economy” is the 5th annual review of G20 climate action by Climate Transparency.

For more details from the full report, click here.