In what was originally billed as the final part of his series on Digital Twins, David Socha introduces a maturity model, charting the likely evolution of the Digital Twin from standalone application to the heart of the future enterprise. 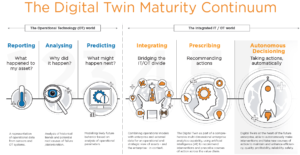 In the previous two installments of this series, I’ve introduced the concept of the Digital Twin; explored some of the current hype surrounding it; delved into a little history and made a few tentative steps into considering what value Digital Twins could have for your business.

This month, I’ll discuss the likely evolution of Digital Twins, from concept to standalone OT application to integration with enterprise IT and eventually to a future point where the Digital Twin either ceases to be recognised as an entity in itself, or perhaps more radically, models the entire enterprise. I’ll consider six stages, combining as what I’ve rather grandly entitled The Digital Twin Maturity Continuum1. Let’s get to it.

The first and simplest of Digital Twins may only give you the capability to understand how the asset they model has been performing. They’ll use sensor (and perhaps other OT) data to show you what’s going on with the asset in a more intuitive, informative and graphic way than you have seen before. These are already good things.

Reporting is great. But what if you spot some concerning trend or issue in those reports? Why did that occur? The next stage in the evolution of the Digital Twin is to include some analysis of historical trends in the operational data, to allow the user to understand potential root causes of failures or deterioration in performance. Understanding why something happened is a major step forward from only seeing that it happened.

Some might already consider this the end game. If a system can model and predict how an asset will operate in the future, we can schedule repairs, reduce downtime and all those wonderful things. At this stage though, our Digital Twin still only has data from OT systems. We can create working, useful models to predict behaviour, but these will be based only on analysis of operational parameters. They’re a good start. They will deliver value, if used properly. But we’re going to have to bridge the Great IT / OT Divide to go further.

Until this stage, our Digital Twins have been OT applications. Many may have been out-of-the-box tools from asset Orginal Equipment Manufacturers (OEMs). From now on though, we’re integrating the Digital Twin with enterprise and external data. We can now expect an operational and a strategic view of assets – and of the enterprise, in the context of these assets. We can enhance predictive models for asset behaviour with data on their maintenance regimes; which operators have carried out interventions; their likely future burden based on contracts and SLAs; and so much more. We’ll also be able to predict future parts & labour requirements; create cost models for optimum management of the business process, not just the asset; even inform future procurement decisions. Our Digital Twins still exist, but the boundaries between them and the rest of the enterprise are blurring.

As the Digital Twin continues to integrate with enterprise IT, we need to consider what else might be going on in that business with respect to analytics. It is likely that an organisation mature enough to be at Stage 4 on the Digital Twin Continuum will already have taken other steps towards advanced analytics capabilities. For example, it may be exploring Artifical Intelligence (AI) in areas such as Supply Chain, Resource Management, Quality etc. With the integration of data and models from Digital Twins, such a business will be ready to move to analytics prescribing courses of action and interventions, based on an integrated view of what is most important to the business. Humans may still make the final decisions, but those decisions will be supported by recommendations based on comprehensive, multi-dimensional advanced analytics.

Let consider Digital Twins at the heart of the future enterprise able to autonomously make interventions and take new courses of action to maintain and enhance safety; efficiency; quality; reliability and profitability. Perhaps not today. But it’s not such a great leap of faith to consider that systems capable of recommending actions are progressively allowed to take more and more of those actions automatically. It’s happening in control systems all over the world already. In such an integrated and data-driven business, digital models of physical assets remain as critical as ever. But are they still Digital Twins as we understood them? At this stage, we may still call the visual representations of assets or fleets of assets Digital Twins. Alternatively, we may call the comprehensive visualisation of our entire business, from raw materials to sales contracts and all points in between our new Enterprise Digital Twin.

See you next time?

There we have it. A six-stage journey from useful little application to potentially modelling an entire future enterprise. You may not begin at Stage 1. You may not see, or even believe Stage 6. Your Digital Twin evolution may not follow a linear path at all. Whatever the case, I hope you find this graphic and the associated explanations valuable.

Originally, this was to be the last of a three-part series on the Digital Twin. However, I’ve had a lot of feedback on the first two parts that has led me to believe there’s more to discuss. Over the next couple of months, I’ll extend this series to share some thoughts on the practical applications to deliver real value from Digital Twins today and also revisit some previous discussions on the human factors in all this mass of technology, automation and yes….AI. I hope you remain interested!