The scope of TC 13 covers all metering equipment for any applications. At present, more than 30 standards and technical reports are available. These are used as they stand, or are adapted by many regions and countries worldwide. To complete the picture, it is to be noted that in some parts of the world standards developed by ANSI are used, sometimes as alternatives to IEC standards (see Smart Energy International 2/2003).

TC 13 standards cover the most important aspects of metering and provide a sound basis for specifications, type approvals and acceptance testing. As infrastructures and installation conditions may vary from country to country, some mechanical aspects – such as meter size and connection arrangements – are left to national standards. To allow competition and innovation, functional requirements are generally not standardised. The standards have recently been rearranged in the IEC 6205X series, to facilitate their use and maintenance; all revised and new publications are published as part of this series. 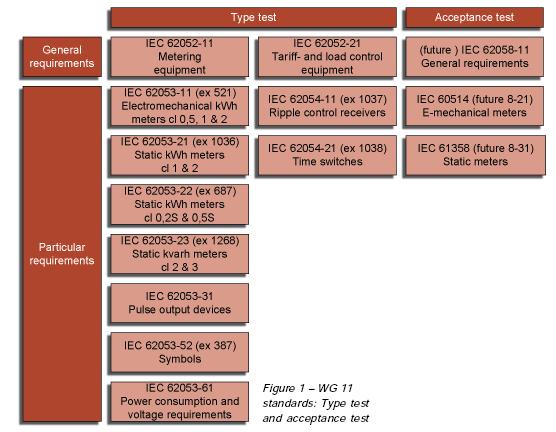 WG 11 is responsible for establishing standards for type test and acceptance test for all kind of metering equipment.

IEC 60514 and 61358, covering acceptance testing procedures, are under revision. The new IEC 62058 series will take into account recent developments in quality assurance.

Dependability is an important aspect for metering equipment, which is used for long periods without supervision and maintenance. Part 9-11 covers general principles of dependability, and part 9-21 provides a method for collecting dependability data from the field. A standard on reliability prediction, part 9-41, based on the parts stress method, will be published soon. The first draft of part 9-31, accelerated reliability testing, has been circulated recently. These standards should provide a solid basis for dependability specifications and field performance monitoring.

The main activity of WG 14 is to specify standards for data exchange for various communication media. It also took on the responsibility of compiling a glossary of terms. IEC 62051 covers the whole scope of TC 13. Part 51-1 covers terms related to the DLMS / COSEM specification (see later).

Part 6-31 specifies a protocol stack for local area networks on twisted pair with carrier signalling. It is mainly used for reading of residential meters, and can be used with or without the Application+ layer protocol specified in part 6-51. Part 6-52 specifies the DLMS server, based on IEC 61334-4-41, established by IEC TC 57. Part 6-41 specifies the physical and data link layer protocols for meter data exchange over PSTN, mainly used for remote reading of high-end meters. It is to be used with the Application+ layer specified in part 6-51. These standards, based on the ISO/OSI layered protocol model, represent a significant move towards interoperability.

The real breakthrough, however, is brought by the DLMS/COSEM specification, defining an interface object model and communication protocols to carry the data.

The COSEM object model provides a view of the functionality of the meter as seen through its interfaces. The interface objects, like registers, profiles, clocks, schedules and associations, are specified in part 6–62. They are identified by the OBIS object identification system specified in part 6-61. The same identifiers are also used on the display. The object model allows the development of tailor-made meters to meet the needs from the simplest to the most complex applications, using standard elements.

Interoperability of implementation is testable using the Conformance Test Tool developed by the DLMS User Association – a liaison partner of WG14 – also acting as a Registration Authority and providing maintenance services.

DLMS/COSEM has proven to be a flexible and efficient solution for meter data exchange, which is reflected in the fast growth in the number of its users. It has also been taken over by CEN for the purposes of utility meters other than electricity.

WG 15 works closely with the STS Association, located in South Africa. The first publication, IEC/PAS 62055-41, contains the Standard Transfer Specification (STS) for prepayment tokens. Part 5-21 provides a framework for specifying standards for prepayment systems. Using this framework, IEC/PAS 62055-41 is being transformed to full IEC standards, specifying an application and a physical layer protocol for transporting prepayment tokens. A new work item will cover virtual tokens. Part 5-31 specifies type tests for prepayment meters, based on parts 2-11 and 3-21.

GLOBAL PARTICIPATION TO CARVE OUT THE FUTURE

At present, TC 13 has 30 participating members and 11 observing members, involving national committees from all continents. They will meet on 18th October 2005 in Cape Town, South Africa, to review progress and to discuss current and future projects to ensure that the needs of the users of its standards are continually met in the new environment created by market liberalisation.