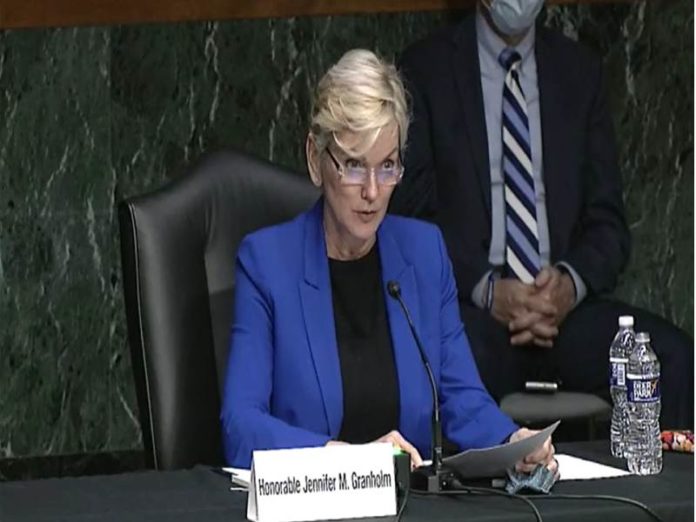 Jennifer M. Granholm was sworn in as the 16th Secretary of Energy by the US vice president Kamala Harris, following a broad bipartisan confirmation vote of 64-35 in the United States Senate.

Secretary Granholm is only the second woman to lead the US Department of Energy (DOE).

Secretary Granholm, said: “I am humbled by the faith President Biden has placed in me to lead this incredible team at the Department of Energy.

“DOE is powered by brilliant scientists, engineers, and energy policy experts who are the very best for the job we’ve been tasked with: to develop and deploy new clean energy technologies that will achieve the Administration’s goal of net-zero carbon emissions by 2050 and secure our nation’s future. I am so ready to work alongside them as we kickstart America’s clean energy revolution, create millions of good-paying union jobs, and deliver benefits to American workers and communities across the nation.”

Prior to her nomination as Energy Secretary, Granholm was the first woman elected Governor of Michigan, serving two terms from 2003 to 2011.

In that role, she faced economic downturns caused by the Great Recession and the meltdown in the automotive and manufacturing sectors. Granholm responded to those challenges by successfully leading efforts to diversify the state’s economy, strengthen its auto industry, preserve the manufacturing sector, and add emerging sectors—such as clean energy—to Michigan’s economic portfolio. Today, one-third of all North American electric vehicle battery production takes place in Michigan, the state is one of the top five states for clean energy patents, and 126,000 Michiganders were employed in the clean energy sector prior to COVID-19.

Granholm was also the first woman elected Attorney General of Michigan, serving as the state’s top law enforcement officer from 1998 to 2002.

After two terms as governor, Granholm joined the faculty of the University of California, Berkeley as a Distinguished Professor of Practice in the Goldman School of Public Policy, focusing on the intersection of law, clean energy, manufacturing, policy, and industry. She also served as an advisor to the Clean Energy Program of the Pew Charitable Trusts.

Granholm began her career in public service as a judicial clerk for Michigan’s 6th Circuit Court of Appeals. She became a federal prosecutor in Detroit in 1990, and in 1994, she was appointed Wayne County Corporation Counsel.

Granholm, an immigrant from Canada, is an honors graduate of both the University of California, Berkeley and Harvard Law School. She and her husband, Daniel G. Mulhern, have three children.