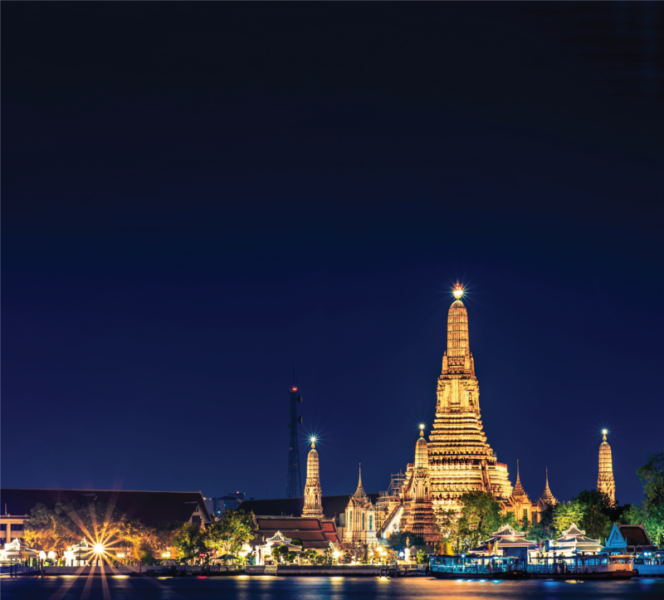 Thailand’s Power Development Plan (PDP) is the nation’s roadmap for power generation, distribution and consumption. The PDP was updated in 2018 – with final approvals of the updates given in 2019.

Feeding into and supporting the PDP are subsidiary plans such as the Energy Efficiency Development Plan (EEDP), Smart Grid Plan (SGP), Alternative Energy Development Plan (AEDP), Natural Gas Supply Plan and the Petroleum Management Plan. Add to this, the Thailand 4.0 strategy and the Thailand Integrated Energy Blueprint and the scope of the complexity grows.

This article was originally published in the Enlit Asia special supplement of
Smart Energy International Issue 4-2020.
Read the  full supplement, the full digimag or subscribe to receive a print copy.

Most important considerations Under the PDP, it is expected that by 2036, renewable generation could reach a total capacity of 17GW – a significant leap from the previously established target of 6GW.

IRENA reports that the total renewable energy capacity in Thailand could increase to 37% – up from its current 12%. Overall, the PDP sets out a plan for a power production split between natural gas (53%), non-fossil fuels (35%), and coal (12%).

A new government was sworn in in July 2019, and it is said the new Energy Minister, Sontirat Sontijirawong may revise sections of the PDP again. His specific focus will be to increase the installation of rooftop solar community-based wastetoenergy and biomass schemes.

The overall contribution by renewable energy is proposed as 29,358MW, or 33% of the national electricity generating capacity. Under the new PDP (2018–2037) coal-fired power will only make up 12% of the national generation mix with natural gas making up the balance. It has been suggested that lowering natural gas reserves may help further accelerate the transition to renewable energy.

Central to Thailand’s transition to a low carbon economy “is the development of advanced technology as a part of Thailand 4.0. The implementation of smart energy – in particular the smart grid initiative – is a national policy under the Ministry of Energy’s Master Plan.”

In May 2019, a pilot programme for 100MW of domestic solar rooftops was launched.

The pilot programme is part of the strategy determined by the Alternative Energy Development Plan (AEDP 2018).

The proposed installed capacity of solar power generation is 15,574 MW, of which it is anticipated 10,000MW will be derived from rooftop installations. Thailand’s solar capacity makes up 60% of the total installed capacity for ASEAN. Wind capacity is over 600MW, one fifth of its 2036 target.

An additional 5,786MW is anticipated from biomass, 2,989MW wind and 3,000MW hydroelectric split between domestic producers and imported from Laos. Waste to energy is expected to produce 900MW.

Biogas and small scale hydro will contribute approximately 1,100MW. As mentioned previously, this will put the contribution by renewable energy at 29,358MW, or 33% of the national electricity generating capacity.

Thailand’s ‘Energy for All’ scheme will increase the amount of waste-to-power generation. The Permanent Secretary to the Ministry of Energy has called for projects to commence operation in 2022 under PPP models. The estimated average $10 million investment for each project will come from state enterprise-run investment companies.

Leading the renewable energy charge are the Provincial Electricity Authority’s investment arm PEA ENCOM and the Electricity Generating Authority of Thailand (EGAT). EGAT will focus on investing in large-scale floating solar and energy storage projects, while PEA ENCOM will be responsible for the Energy for All scheme.

August 2018 marked a milestone for Thailand’s renewable sector, when Power Ledger, an Australian blockchain company and BCPG, a Thai renewable energy business, launched a peer to peer (P2P) renewable energy trading trial across the T77 precinct in 2018. In partnership with the Thai Metropolitan Electricity Authority, the pilot has a total capacity of 635kW in solar power over a 24-month period.

Excess energy was sold directly within the community and not to the state utilities as would normally be the case.

In May 2020, Power Ledger announced a new partnership with TDED, a joint venture between the Thai Government’s PEA ENCOM International, which is a subsidiary of the Provincial Electricity Authority (PEA), and BCPG. The partnership will create a blockchain-based digital energy business developing peer-to-peer energy trading and environmental commodity trading solutions across the nation.

The collaboration will see the application of blockchain technology to manage energy at three BCPG Group clean power projects, which have been included in a “Sandbox Project” to accelerate renewables by Thailand’s Office of Energy Regulatory Commission.

One of the first projects will focus on energy and carbon management at the 12MW Smart Campus at Chiang Mai University in the North part of Thailand.

Bundit Sapianchai, President of BCPG and Chairman of the Board of TDED, said that blockchain technology “will help materialise TDED’s goal in the development of digital energy products and services and make clean energy more accessible to people.”

Another significant milestone in 2018 was an investment by the Asian Development Bank (ADB) in green bonds worth $155 million. The bond was issued by B. Grimm, one of Thailand’s leading private power producers, and is the first certified climate bond to be issued in Thailand. The proceeds of the bond will finance nine solar power plants with a capacity of 67.7MW.

Energy Minister Sontirat Sontijirawong has proposed a COVID-19 plan to mitigate the impact of the virus which will accelerate investment. According to The Nation Thailand, the investments are for “community power plants to stimulate the grassroots economy [and] promote the country as a liquefied petroleum gas (LPG) trading centre among others.”

Sontirat has said the plan should generate more than Bt100 billion ($3.178 billion) in revenue.

“Energy-related agencies, such as PTT and the Electricity Generating Authority of Thailand [Egat] will also see if they have any plans to mitigate the impact of Covid-19,” he said.

In addition, 20 million households in Thailand have benefited from an electricity bill subsidy that gave free use of electricity and deductions of bills for the period March 2020 to May 2020.

He said that the lost revenue would amount to 23.68 billion baht ($753 million) but continued: “The measure reduces the electricity charges burden on households.

It is the cost of living of the people who are working from home to support the government’s control of Covid-19.”

Thailand’s regulatory framework has supported more than US$9.7 billion of investment in renewable projects since 2010. The framework for a Thai energy sector which is shifting to a low emissions future has already been put in place. The importance of the next steps, however, cannot be overstated as the country continues its energy transition. SEI Update:

Since this article was written, the following news has been published:

On 9 July 2020, Energy Minister Sontirat Sontijirawong, along with Finance Minister Uttama Savanayana and Higher Education, Science and Innovations Minister Suvit Maesincee resigned from the party that leads the government coalition. A week later, Sontirat resigned his position as Minister of Energy.

He said he was pleased “with the success of many projects he had moved forward over the past 12 months.” He added that the solar rooftop scheme for householders will most likely be re-launched in the second half of this year, after some of the requirements have been changed to enable people to generate and sell electricity to the grid, according to a post on theasianaffairs.com.

Make sure to follow Enlit Asia – the new unifying brand for POWERGEN Asia and Asian Utility Week – to keep up-to-date about the latest developments in the energy sector in Thailand.