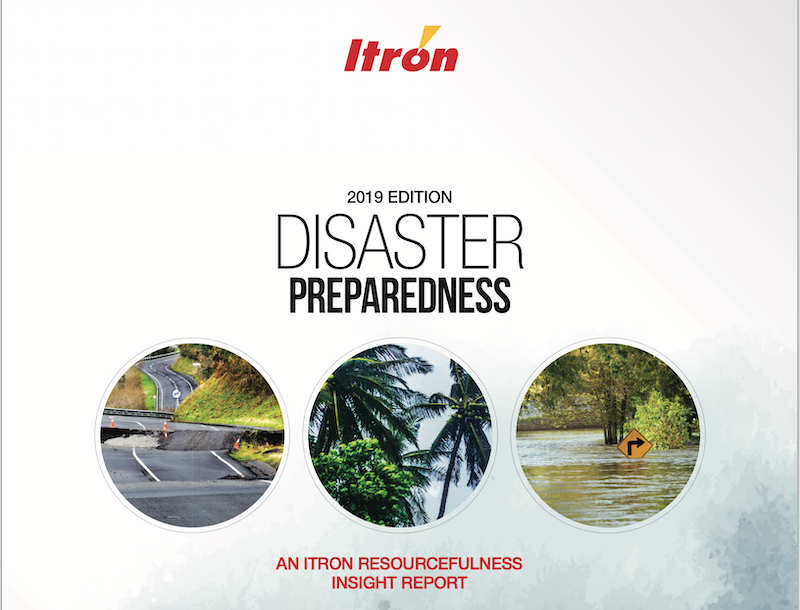 The report reveals perceptions on an array of topics relating to disaster preparation, response and recovery, exposing a shared and heightened worry about a disaster striking today compared to five years ago. The survey also revealed a significant, conflicting gap across the two groups pertaining to each’s ability to prepare, respond and recover from disasters.

Itron’s Resourcefulness Insight Report addresses a critically serious and timely topic as regions of the United States still struggle to recover from just the past two years of natural and man-made disasters, including Hurricane’s Harvey, Irma, Florence, and Dorian, and the catastrophic wildfires in Northern California. The severity and frequency of disasters is not easing either; according to the United Nations, since 1970 the number of disasters worldwide has more than quadrupled to around 400 a year. Some of the most notable findings in Itron’s report include:

“Disasters, both manmade and natural, are increasing at record levels and our industry is rapidly calibrating around this new normal,” said Marina Donovan, vice president of global marketing and public affairs at Itron.  “As climate change and cyber-attacks increasingly threaten our energy and water infrastructure, the report reveals a collective sense of awareness and urgency among utilities and consumers and discusses the important role of technology in helping utilities better prepare for, respond to and recover from disasters.”

Itron’s Resourcefulness Insights Report uncovered areas for improved preparation tactics, as well as insights to the investment focuses that utilities plan to prioritize, including:

“Hurricanes, earthquakes, storms and other natural hazards can cause damage to the energy grid and impact the delivery of electricity to customers. EEI has seen firsthand the consequences of these incidents to the nation’s energy grid,” said Scott Aaronson, vice president of Security and Preparedness at the Edison Electric Institute. “Following natural disasters, electric companies respond as quickly and safely as possible to restore service to affected customers. Fortunately, advances in technology are making the energy grid more resilient and helping the industry prepare for and respond to Mother Nature’s unpredictable behavior.”

History has proven that natural disasters expose utilities to financial, physical and reputational damage, underscoring that the way they prepare, respond and recover leads to a true make-or-break moment. Leading-edge smart technology and sensors can help, such as voltage analysis and outage detection and restoration. Utilities can harden their systems in the face of the next disaster by identifying likely hazards, assessing vulnerabilities, calculating outage impacts, determining the steps that they can take now, and assessing where further investments are needed.

Key outcomes and case studies of the Itron Resourcefulness Insights Report will also be explored during Itron Utility Week, commencing this morning in Marco Island, Florida.

Follow #IUW19 for live updates from the event and join us on Oct. 14 at 10:30 a.m. EDT for the #ItronChat on Twitter to talk about what it takes to be prepared.

To download a full copy of the Itron Resourcefulness Insights Report, visit www.itron.com/resourceful.