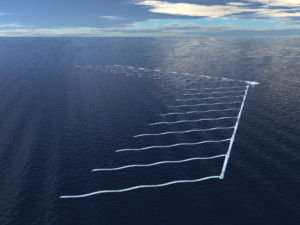 In the past two weeks we have published several marine-related stories, writes Jonathan Spencer Jones, consulting editor at Engerati, the sister portal to Metering.com focusing on smart energy.

Among these is the coming into operation of the world’s first grid-connected wave array off Australia’s west coast, and the approval of plans to build the world’s largest offshore wind farm out in the North Sea. [First Grid-Connected Wave Energy Array Operates In Australia andOffshore Windfarms Set To Reach New Levels]

The two technologies are at different stages of development with the wave array in demonstration and the wind project based on tested technologies. However, both are at the cutting edge in terms of their scope.

Wave and other forms of marine energy have lagged the development of other renewables, principally because of the difficulty of harnessing these energies, and indeed a number of challenges still need to be overcome (which we will cover in a forthcoming review). Offshore wind on the other hand, has followed the development of onshore wind, so the developmental transition has been more straightforward, but in terms of scale there have been few onshore wind farms of over 1GW, let alone offshore.

Nevertheless, the marine environment is extremely harsh and how these technologies stand up to a 20-year-plus lifetime remains to be seen. At least modern smart remote monitoring solutions will help to ensure that their lifetimes are maximized.

Global Wind Power On the Increase

Following a slowdown in new wind installations during 2013, the market rebounded during 2014 with a 44% increase to exceed 50GW for the first time.

In an initiative to disaster-proof its Tohoku factory, civil engineering and real estate company Sekisui House contracted with GE Japan to provide a  battery energy storage system, a  gas engine for cogeneration, and more than 600 LED lighting units.

Power management company Eaton has been hired to improve power reliability and system safety at the White Sands Missile Range.

SDG&E’s Borrego Springs microgrid is set to be one of the largest in the US to operate solely on renewable energy.

The role of demand-side management in Europe’s energy transition