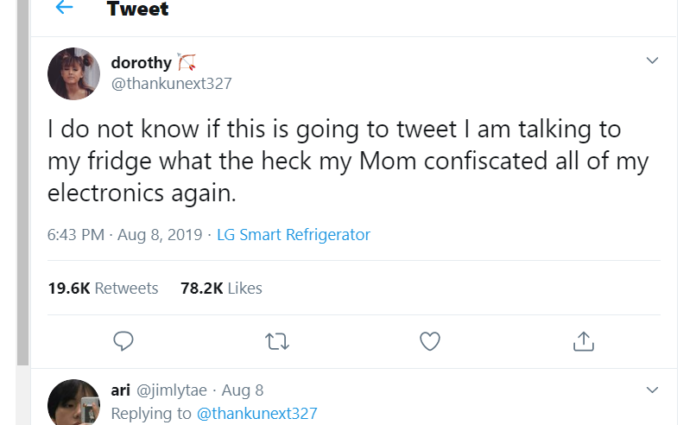 A 15-year-old Ariana Grande fan known simply as “Dorothy” has made international headlines after her mom confiscated her mobile phone “so I’d pay more attention to my surroundings”. The teen made use of a Nintendo DS console, Wii U hand-held console, and eventually, her LG smart fridge in efforts to beat the ban.

The teen, desperate not to lose contact with her thousands of followers and “mutuals” generated over 12,000 retweets, the creation of the hashtag #freedorothy, and Twitter has named her an “Icon”.

To be fair, the tech ban was put in place by her mom after Dorothy got distracted whilst cooking and caused a kitchen fire.

“She took all my tech so I’d pay more attention to my surroundings,” said the teen, who messaged the Guardian from her cousin’s iPad because the ban was still in force. “I felt mortified! I was worried because I’ve been bored all summer and Twitter passes the time for me.”

After tweeting to her online network, notifying them of the disciplinary action, another tweet was published possibly from her mother, stating: “I seen [sic] that Dorothy has been using twitter on her Nintendo. This account will be shut down now.”

Dorothy then sent a tweet saying: “my mom took my phone and my nintendo, so i have no choice but to use my wii … thank u all for the support and love.” The tweet’s source label, confirmed the device’s use.

As a last resort following the supposed impounding of the Wii U, she sent a tweet from her LG smart fridge: “I’m talking to my fridge what the heck,” she said.

Dorothy didn’t confirm the length of the ban, but told the Guardian: “I may be late to reply, as it is difficult to find something to use Twitter,”.

She can take heart though in knowing that thousands of Twitter users around the world, and even LG Electronics, are in her corner.