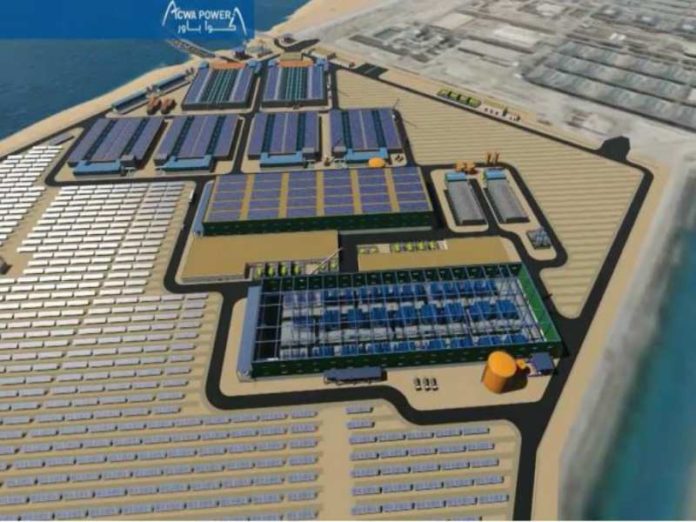 The UN’s World Water Day on 22 March focussed on the theme of “Water and climate change” to shed light on the primary way climate change is making its presence known: the availability of fresh water.

With rainfall patterns, seasonal duration and other ecological effects already causing noticeable harm in the form of unexpected droughts, desertifi cation, soil erosion and other forms of ecological damage, the natural resources underpinning our economies are under threat, and water is becoming increasingly scarce where it was once plentiful.

One region of the world however, is proving the opposite to be true, using a resource in abundance to overcome scarcity, and helping the world deal with the very real threat of thirst.

According to global infrastructure development tracking company Ventures Onsite, the Middle East and North African (MENA) region’s investment in the water desalination market is increasing “substantially” with desalination in the region making up just shy of 50% of global projects.

Consequently, sea water desalination is responsible for 90% of the fresh water consumed in Gulf Cooperation Council (GCC) countries, and investments and innovation are set to take off in the region in the run-up to 2030.

With the desalination market expected to grow to $4.3 billion by 2022, Saudi Arabian news agency Wam reported that desalination capacity is expected to grow by a total of 37% by 2025. Desalination, however, is notoriously energy intensive, and there is increased pressure on governments and utilities to minimise energy consumption and optimise water use.

A strong trend has emerged in recent years, propelled by both the need for decarbonisation, and the region’s determination to take a leading role in embracing new technologies – solar-powered desalination.

In May 2019 Abu Dhabi’s ACWA Power announced an agreement with a consortium led by Spanish group Abengoa and Chinese EPC contractor Sepco III to start early work on the construction of the world’s largest reverse osmosis (RO) desalination plant to be powered by solar at Taweelah. The project aims to provide fresh water to four and a half million people in the emirate. On completion, the plant, being built at a cost of over $700 million at the Taweelah power and water generation complex, will boast a capacity of 909,000 cubic metres per day, according to the company.

This project, located on the Arabian Gulf coast, is part of UAE government’s plan to encourage private participation in the development of the country’s infrastructure.

The project will guarantee supply to the city of Abu Dhabi throughout the year and will be the first large scale desalination plant in the emirate to combine the production of drinking water with the generation of clean energy, thanks to the installation of 40MW of solar by the Spanish firm.

At present, the levelised cost of electricity (LCOE) from solar PV projects in Saudi Arabia and the UAE is already as low as $0.03 kilowatts per hour (kWh), compared to the LCOE of solar, which is expected to drop below the $0.03c/KWh this decade.

In Dubai, power and water utility Dubai Electricity and Water Authority (DEWA) is planning to power the region’s desalination plants with solar power, and save approximately $13 billion between now and 2030, with a capacity target of 305 million imperial gallons per day (MIGD).

It is an ambitious goal for the emirate that relies on 470 MIGD of desalinated water. The decision was based on a successful run of a pilot programme with ENGIE (then Suez) to desalinate water in Ghantoot, Abu Dhabi, in 2016 with the help of 100% solar energy.

“There is no longer any doubt we can now run a desalination plant on solar power. Our next step now is to take these findings and apply them to industrial scale desalination,” said ENGIE’s Middle East CEO Pierre Pauliac at the time.

“Dubai is pushing for increased efficiency in the production of water. We are already in the final stages of a large scale integration of renewable energy in our water production processes,” said Jamal Shaheen Al Hammadi, vice president of Clean Energy & Diversification Business Development & Excellence at DEWA.

“Photovoltaic reverse osmosis will now become the new trend as we aim for 100% renewable energy desalination in Dubai. This supports our efforts to boost water production in the emirate.”

By increasing operational efficiency by decoupling desalination from electricity production, the utility is expected to save around AED 13 billion and reduce 43 million tonnes of carbon emissions by 2030.

“DEWA recognises the role of modern technologies in developing the energy and water sectors, and redefining the concept of utilities to achieve the vision and directives of the UAE’s wise leadership to keep pace with the latest developments and disruptive technologies of the Fourth Industrial Revolution, while focusing on shaping the future and improving the skills of Emiratis. This achieves the National Artificial Intelligence Strategy 2031, to develop an integrated system that employs AI in vital areas of the UAE,” said HE Saeed Mohammed Al Tayer, MD & CEO of DEWA.

“His Highness Sheikh Mohammed bin Rashid Al Maktoum, vice president and prime minister of the UAE and Ruler of Dubai, launched the Dubai 10X initiative to mandate the Government of Dubai to become a global leader that is 10 years ahead of all other cities through government innovation and reshaping the way things have been done before. To achieve this initiative, DEWA is committed to incorporating innovation in all its strategies and initiatives. This supports government plans such as the UAE Strategy for the Fourth Industrial Revolution, to strengthen the UAE’s position as a global hub for the Fourth Industrial Revolution, and increase its contribution to the national competitive knowledge-based economy by advancing innovation and future technologies,” said Al Tayer.

DEWA plans to launch an aquifer storage and recovery scheme (ASR), where excess water is stored in aquifers and pumped back into the water network when needed, by building a subterranean water basin to store 6,000 million gallons of water that can be retrieved when needed. This will provide the Emirate with a strategic reserve of over 50 million gallons of water per day in emergencies, while ensuring the quality of the stored water remains unaffected by external factors.

Imitating nature to irrigate the smart city of the future

Perhaps you’ve heard of NEOM, the proposed mega-city near Riyadh in north-western Saudi Arabia? The kingdom’s Public Investment Fund-backed (PIF) flagship project, along with UK-based Solar Water, will build the first ever desalination plant based on “solar dome” technology by the end of 2020.

By imitating the natural process of evaporation and precipitation seen in nature, the proposed 100% carbon-neutral technology has been hailed as the future of desalination and is the first use of concentrated solar power (CSP) in desalination.

It’s expected the project will produce low-cost, environmental-friendly water, at an estimated $0.34/m3 , significantly lower than desalination plants that use reverse osmosis methods.

The desalination process was first developed at the UK’s Cranfield University and uses seawater pumped into a hydrological “solar dome” made from glass and steel. The seawater is then superheated, evaporated, and precipitated as fresh water.

Commenting on the project, Saudi Arabia’s Minister of Environment, Water, and Agriculture, HE Abdulrahman Al-Fadli, said: “NEOM’s adoption of this pilot supports Saudi Arabia’s sustainability goals, as outlined in the country’s National Water Strategy 2030, and is fully aligned with the sustainable development goals set out by the United Nations.”

Regarding the project’s future potential, the head of the Water division at NEOM, Gavin van Tonder, said: “We’re really excited by the prospect of bringing cutting edge water technology and fresh industry thinking to NEOM. By using solar dome desalination techniques, we can build a highly effective, efficient water utility that is both future-oriented and environmentally responsible.”

Our planet is covered by 1,390 million cubic kilometres of water, but almost 98% is undrinkable. The World Health Organisation estimated in 2017 that over 785 million people globally still lack access to basic water services, and the pressing climate change deadline threatens even greater restrictions on the availability of the one resource mankind truly needs to survive. The future of utilities lies in technologies that offer both sustainability with efficiency. The ongoing development of solar-powered desalination opens up the potential for a virtually endless water supply, and whilst the Middle East region may be losing influence in oil circles, the rest of the globe would do well to learn from it for a waterplentiful future.