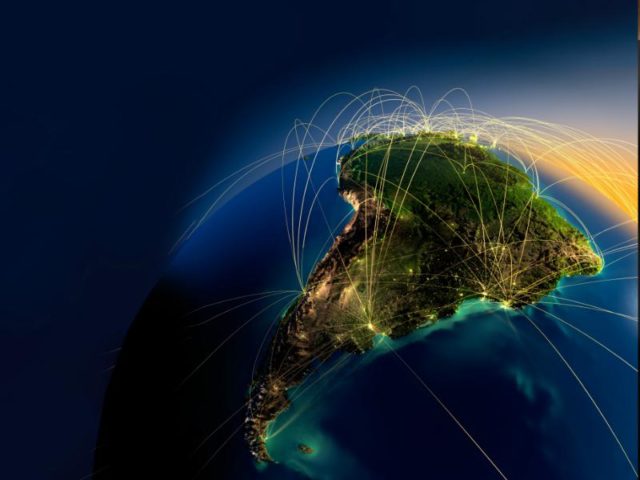 What is the status of smart grid technologies in Latin America and the impact of COVID-19 on the sector? This article explores the factors driving the adoption of digital grid solutions within the region.

As the world focuses on recovering from the dramatic economic impact of the COVID-19 pandemic, governments are realising the potential to combine this process with decarbonisation efforts.

This period of green recovery has been hailed as a once-in-alifetime opportunity for countries to make significant strides towards Paris Agreement compliance.

The action needed now is that of policy change. Governments need to take an active stand to foster a regulatory framework that is more in line with technological advances, renewable energy innovation and aligned with societal zeitgeist, which is upping the ante in the battle for green.

Despite the negative effects of COVID-19 on South America’s economy, the focus on smart grids by utilities, governments and stakeholders within the energy sector is expected to increase and play a key role in the development of the market.

He says the pandemic has reminded the energy sector of the need for digital solutions that enable remote control and optimisation of grid networks to meet demand and changing customer expectations.

Latin America is one of the regions where the advance of smart grids has scarcely been evident apart from a few scattered pilot projects and the regulation of the use of distributed generation systems at the household sector level.

“Optimal grid management through the deployment of digital solutions is something that should not be taken for granted,” says Donato.

The power outage that left Argentina and parts of southern Brazil, Paraguay and Uruguay without power in June 2019 is just one example of how the region needs to improve the smartness of its network. The distribution grid in Brazil represents another example where a complex system that provides service for more than 68 million customers provides little or no automation.

However, led by Brazil, Colombia and Chile, countries in South America are expected to invest $18.1 billion in smart grid infrastructure over the next decade, says smart infrastructure market intelligence firm Northeast Group.

Chris Testa, research director at Northeast Group, said: “Obviously the global pandemic raises questions about all investments, but the key characteristics of the South American market should remain in place.

“After years of unrealistic promises, South American utilities and regulators have begun to set pragmatic timelines and develop the regulations needed for larger investments. As the market is poised for medium-term growth, the near-term effects of Covid-19 should be limited. At the same time, economic challenges have stalled smart grid progress in South America in the past, so the ongoing response to the pandemic will help determine if largescale investments move forward.” Eight of the ten countries in South America already have significant pilot projects in place, while half of the countries have developed some form of smart meter regulatory target.

For example, before the pandemic, Chile and Colombia have been finalising regulations for large-scale smart metering rollouts and several of the largest Brazilian utilities had begun trials in advance of larger deployments in the early 2020s.

In Brazil, Rio de Janeiro-based utility Light has an on-going 1.4 million smart meter deployment whilst RGE Sul entered into a second phase of a grid modernisation project with Itron. The second phase includes expanding the rollout of an IoT network by deploying a canopy for commercial and industrial customers in the state of Rio Grande do Sul.

The project will help RGE Sul to automate grid management processes, improve its operational efficiency and the quality of service by quickly and effectively managing outage and restoration of services. The project will also enable distribution automation capabilities.

Energy distributor Elektro in partnership with Nokia also started the deployment of a 4G network to improve services to 75,000 consumers in the City of Atibaia and surrounding areas in the state of Sao Paulo.

The network will connect the utility’s grid equipment, smart meters, substations and distributed energy generation sources. By so doing, Elektro will improve grid reliability by up to 50% and reduce commercial energy losses by up to 80%.

Osvaldo Di Campli, head of Nokia Latin America, said: ”This future-proof solution will also provide an evolution path to 5G technology in the future, which will offer an array of additional capabilities to keep pace with the fast-evolving utility market.”

In Mexico, CFE, mainly using funds secured from the government’s PIDIREGAS scheme, is deploying hundreds of thousands of AMI meters per year. Other projects in diverse countries across the region include ones by Enel in Peru, Edesur in Argentina, Codensa in Colombia and UTE in Uruguay.

The growth of the smart grid market in Latin America has been in part driven by new entrants to the market, according to Northeast Group.

Local content requirements, especially in Brazil, mean that most international vendors will need local partners in the region, but overall the market remains open and competitive.

This should lead to lower-cost metering infrastructure and an improved business case, while also placing greater importance and scrutiny on vendor selection for communications and software.

For example, Italian energy giant Enel has expanded its already strong presence in the region and recently certified its smart meter in Brazil. Additionally, Accell, a newly formed company, was selected by Itron as the company’s partner and lead distributor of networked solutions, analytics, smart cities and outcomes offerings within the Latin America region.

Another key driver of smart grid infrastructure initiatives are the unique near-term and long-term benefits South American countries will receive from deployments. Utilities will receive near-term savings from smart meter deployments by reducing nontechnical losses. At nearly 15%, the regional transmission and distribution loss rate is among the highest in the world.

Colombia-based utility and one of the largest utility companies in South America, Interconexion Electrica S.A. E.S.P. (ISA) embarked on a $100 million grid modernisation project with ABB in April 2020. The project includes the supply and installation of shunt reactors and gas-insulated and air-insulated switchgear equipment such as circuit breakers, instrument transformers and hybrid modules to ensure that voltage stays within safe limits.

The project will help avoid blackouts and help the utility to limit energy transmission and distribution losses.

With Landis+Gyr, Guatemala utility Empresa Electrica De Guatemala completed an advanced metering infrastructure project in April this year. The AMI project allows the utility to implement time of use energy pricing to help consumers reduce their energy use and costs during times when demand on the main grid is high.

“Working with Landis+Gyr, we were able to install the full network and meters over a five-month period. This allowed us to meet regulatory requirements and will enable us to offer TOU rates to any customer who requests them in the future,” said Giovanni Salazar, head of smart grid operations at EEGSA.

Colombia’s second-largest utility EPM recouped $53 million within three years by deploying a revenue intelligence and protection system after recording an increase in its revenue losses.

Longer-term benefits are expected to be seen through increased integration of renewable resources and customer engagement benefits.

To conclude, the lessons learned by players within the region’s energy sector and by regulatory authorities have been far reaching and dire enough to pressurise to expand their focus on smart grid development.

Moreover, with the pandemic enforcing a ‘work from home’ or remote-work model for the foreseeable future, it is entirely possible that more and more utilities will expand their investments in smart technologies, giving them the insight they require, with the social distancing they need.