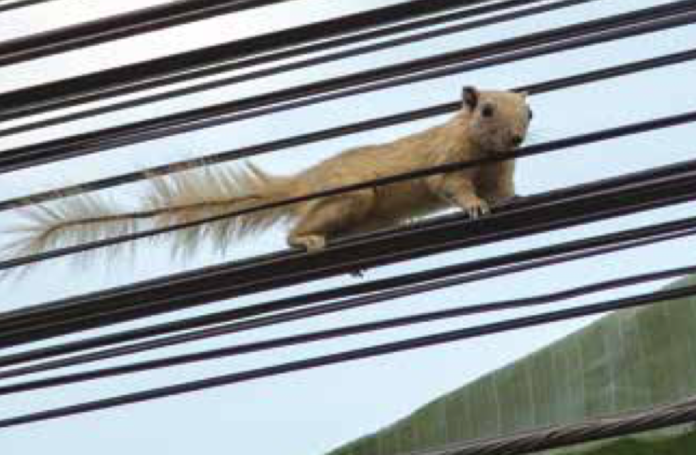 How does nematode-level logic help utilities solve a squirrel-level problem? The C.Elegans worm is the first (and only) animal to have its intelligence replicated (by the OpenWorm project) and represents the pioneering level of AI today.

To answer the much bigger question of: What’s the potential for Artificial Intelligence in utilities? – it’s better to first focus on the more answerable questions. Here, the squirrel problem (an animal packing the power of 107 higher intelligence than the worm) represents one of the constants for the utilities looking to solve their biggest issues.

Why target the squirrel? The answer lies in the sheer number of blackouts they cause per year, once put at 10-20% of all power outages in the US by a Washington Post article but even now a clear favourite of blame for utilities explaining away their interruptions; a more frequent cause than cyberattacks. Reducing outage minutes is the number one goal for most utilities, so if it’s smart grids that AI wants to support, it’s a squirrel-level problem it needs to defeat.

Does AI need to evolve to higher levels before it suits utilities’ needs, or can much be achieved with just a few small steps starting from today’s capabilities?

Even at an early stage, the disruptive and transformational potential for AI is clear across all industries. Already, huge investments are being made on AI around the world, with an expected >$213.8 billion to be spent on AI hardware and software in 2019.

Of the six important transformative technologies tracked by Digital Orbit, the new executive briefing from IHS Markit Technology, results showed AI will have the largest impact in the next three years. Attaining the highest score in 9 out of 10 measures on impact (a key metric used by the study to gauge how influential each technology will be across multiple industries), AI was well ahead of second-ranked ‘cloud’ and four other technologies, including 5G, blockchain, IoT and video everywhere/ ubiquitous video.

This is despite technology today being at the so-called narrow or weak AI stagewhere artificial intelligence is less robust than human brainpower, or maybe equal/ superior in just a few limited tasks and senses. Most AI applications are currently at this point, characterised by four major abilities: perceiving, learning, abstracting and reasoning.

Whilst superhuman-AI is still a long way off, it is progressing quickly driven by advancements/breakthroughs in computer processing power and communications technology, which in turn will spur an explosion of collectable and analysable data. Moving to cloud-based deployment will also be a factor, enabling more computing power to tap artificial neural networks or deep learning network types, where centralising data and massive computation are required for analysis.

As ever, the trickiest part is in finding the best industry-specific use cases, to begin with, starting the learning process for developers, businesses and algorithms.

If AI-driven smart grids are the moonshot, then there’s more than one route or application for utilities to take. Utilities are naturally cautious entities with vastly varying priorities, circumstance and funding, even within the same country. Convincing a utility to spend money on technology in the first place is often half the battle.

However, in the context of an overview it helps to focus on a generic utility’s biggest smart grid goal and its biggest challenge in getting there: outage reduction and data management, respectively.

Maintaining uptime for critical national infrastructure – the power grid – is the priority for utilities, especially since any outages will cost them twice over; they lose revenue opportunity for every minute they’re down, and they pick up the cost of fines from regulators/governments too.

In other words, utilities will always need to spend money on their squirrel-level problems.

It’s been a tough year for utilities worldwide for big outages too; with large blackouts occurring in 2019 across the likes of Venezuela, Argentina/Uruguay/ Paraguay, Indonesia, the United States and the United Kingdom. Whilst not all are animal-related (despite one prominent early theory in Venezuela of a lizard being the root cause), it’s representative of the threat of real damage to transmission and distribution infrastructure that causes some of the biggest utility headaches. How to monitor, protect and maintain a vast physical network of assets in an environment you don’t control?

France alone, the host country of this November’s European Utility Week, will see over 32 million connected smart meters installed by the end of 2025, and that’s just for one utility application in one country with a population of 67 million – adding more data points is no longer the challenge. Utilities are realising the potential their massive network of data can hold in giving them visibility of the grid, but the connection doesn’t necessarily mean insight without the tools to analyse.

Advances such as cloud hosting (and therefore computing) are already gaining adoption though; take the North American market where 20% of all installed two-way electricity meters already have their headend software hosted by a third-party vendor (such as the meter manufacturer). This is increasingly just the first step in a process, as vendors and utilities alike then explore the addition of modular analytics features on top; for example, outage detection algorithms that strip temporary outages from the data before it feeds into the utility’s outage management software (OMS). The result is reduced truck rolls overall – lower costs on wasted trips and more maintenance budget for the real problems.

But what if the system itself could analyse even more? Such as weather data, maintenance schedules, monitor power quality data from the meters, just to name a few – then analyse and show problems before they become blackouts?

There’s valuable data out there, but most estimates say utilities are analysing <5% of the data available to them right now anyway – and that number will fall if more data is simply fed into existing solutions. Utilities need technology’s help to analyse across the whole system.

The AI applications for utilities

Outage management and predictive maintenance are therefore some of the best case studies for AI in utilities, making sense of massive data and bringing real ROI from investments against the cost of outages. This is not just a job for centralised software solutions, given the scale of the increasing sensor network (full metering and distribution automation sensor data together is likely more than utilities could handle right now). AI support will be needed from bottom to top, including from edge hardware across the grid.

Some of this AI capability already exists today.

AI development will benefit utilities indirectly too. For example, in telecoms, surveys showed that nearly seven out of 10 operators began to investigate AI and Machine Learning (ML) for their businesses, while nearly six out of 10 had begun lab testing these types of solutions; 24% said they already had between three and five targeted uses cases in production deployment.

Meanwhile, in the world of data centres, new high-performance servers have been developed with AI/ ML algorithms in mind. Servers shipped with specialised coprocessors for AI/ML will surpass 10% of annual global server shipments by 2022.

Utilities will benefit as clients to both telecoms and datacentre industries. AI applications in business systems will penetrate the utility market too; such as analytics to help fraud prevention, or improve cybersecurity.

What next for the worm?

The electric grid is evolving through many transformations – from solar and electric vehicles to increased extreme weather events – but the basic goal of reducing outages will always remain.

Through both grid-focused applications and adoption in adjacent industries, worm-level AI is already capable of making progress in utilities. Even superhuman-AI in the distant future is unlikely to fully eliminate a squirrel problem (and to address the elephant in the room, even squirrel-level intelligence doesn’t stop it ending badly for those which short out in substations), but with the right development, it can help vastly reduce the cost for utilities.

Truthfully, you don’t even need the intelligence of a nematode to start solving your squirrel problems. SEI

David Green, is a Research & Analysis Manager for Smart Utilities Infrastructure and IHS Markit Technology, now a part of #InformaTech