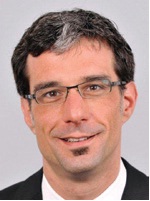 Andreas Breuer is the Vice President of RWE Deutschland AG

Mr Breuer’s top 3 predictions for the power sector in 2015 are: