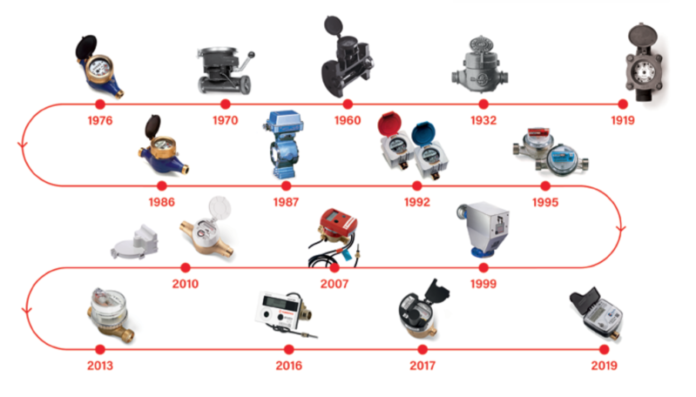 Maddalena is a leading name throughout Italy and Europe in the field of water metering instruments. Founded in 1919, it has constantly evolved its business structure and range of meters for submetering and utilities and now produces more than three million units per year.

Maddalena is celebrating its 100th anniversary: a milestone achieved by a company that has grown exponentially while remaining proudly independent, as one of the few industry players still run as a family business. Throughout its history, Maddalena has owed its success to the family that gave it its name.

Early in the twentieth century, a lawyer from Friuli named Giacinto Maddalena saw promise in the fledgling market and began to distribute water meters in Italy for the Viennese firm Schinzel. This is how Società Italiana Contatori d’Acqua Maddalena & C. was founded in Udine in 1919. With orders growing rapidly in number and size, in 1928 Maddalena began to develop a line of meters with its own proprietary technology, and in 1932 it broke free from Schinzel’s patent. This was a crucial step: thanks to radical design modifications and technical improvements, Maddalena meters acquired the precision and durability for which they continue to stand today.

In the early 1950s Giacinto’s son Giovanni Battista took over. He was the first to take business trips abroad and have products certified in various countries, foreshadowing the attention to the needs of foreign markets that would become another of the company’s strengths.

Nineteen eighty-two was a landmark year: now at the top of the Italian market, Maddalena moved from Udine to its current location in Povoletto, where it enjoyed state-of-the-art technological, industrial, and manufacturing facilities at its new factory. It was also time for new blood, and Franco and Clara Maddalena took over from their father, Giovanni Battista.

The joint efforts of Franco and Clara led the company to a whole new level as it set its sights on the most promising international markets. One of the largest of these was China, and it was also one of the most complex. Despite the often-prohibitive logistics, management saw to it that in 1987, Maddalena became the second Italian company to sign a joint venture agreement with Communist China. In just 18 months, a turnkey factory was outfitted and now has an annual capacity of 500,000 meters satisfying the highest European standards.

The following year, another crucial agreement was struck. In 1988 Maddalena partnered with Japanese technology giant Toshiba, to produce and distribute in Europe a line of electromagnetic flow meters suitable for most (including industrial) liquids. Under this agreement, Maddalena was able to import organizational and procedural techniques that were then unknown in Europe and assimilate the Japanese mindset of total quality, while acquiring know-how that made it one of the few companies then able to produce static electronic meters.

From this position of strength Maddalena managed to claim a leading role in Eastern Europe, which had opened up after the fall of the Berlin Wall in 1989, and began to work with the major water companies before further expanding and exporting its meters around the world.

Meanwhile, it was undergoing its second manufacturing revolution, thanks again to what it had learned from its close relationship with Toshiba. In 1993 Maddalena was transformed into the world’s first water meter factory set up as a flowline with the completely automated assembly of finished components, turning out a packaged, metrologically certified meter every eight seconds. Ahead of its competitors, Maddalena made the bold choice to create a horizontal production model based on the economies of scale ensured by its partnerships with the nascent industrial clusters.

The company continued to expand overseas and to build a strong reputation in different countries; as part of the economic mission to Uruguay sponsored by the Italian government in 1998, for example, it gained a foothold and later expanded in South America.

It was around this time that remote meter reading systems began to emerge, and Maddalena played a pioneering role. After initial experiments with wired data reading systems, in 1995 Maddalena introduced its first 433 MHz radio for multi-jet water meters.

With the new millennium, Maddalena expanded and diversified its range by acquiring the irrigation business of S.I.G.M.A., an industry leader based in Milan, and creating its own Irrigation Division. In 2006 Maddalena added thermal energy meters to its catalogue, and in 2009 it debuted its first positive displacement meters. Around this time, Giovanni Maddalena and Filippo Fontanelli – representing the fourth generation of the Maddalena family – joined the firm to develop these new businesses.

From 2009 to 2012 Maddalena continued to invest in automation to boost its production capacity, first by upgrading all of its meter testing benches and then by installing a new automated assembly line for residential meters. In 2016, the Maddalena calibration lab became one of the first of its kind in Italy to earn Accredia certification in accordance with ISO/IEC 17025.

The biggest news in recent years has been the development of smart metering. As it is for all innovative technologies, Maddalena has been at the forefront, and has developed a new range of radio solutions that have won awards at the international water exhibition H2O and at Pollutec, the international trade show for environmental equipment, technologies and services.

In 2017, the global research and consulting firm Frost & Sullivan presented Maddalena with the Global Smart Water Meter Technology Leadership Award in recognition of its innovative contribution to the field. That year Maddalena became the first water meter producer to earn LoRa Alliance certification for a radio module for endpoints.

In 2018 Maddalena embraced a new challenge, introducing the ElecTo range of meters with electronic totalizers and rebranding its mechanical totalizers under the MecTo family. Both provide smart city solutions: flexible connectivity to the IoT universe and support for short- and long-distance communications technologies.

Expansion of the company’s premises was also completed in 2018, and the new plant is Europe’s highest-capacity water meter production facility under a single roof. This major investment increased the plant size to 15,000 square metres, housing three new automated production lines.

In 2019 Italy’s UniVerde Foundation and Anima Confindustria gave Maddalena the Green Pride award for water technologies, “for the development and use of IoT technologies for a better analysis and greater efficiency of network services with real-time data transmission.”

This honour is a testimony to Maddalena’s commitment to finding technological solutions that can help build a world where innovation and sustainability are inextricably linked, through the evolution of the humble meter: an instrument that in Maddalena’s first 100 years has made unimaginable progress, and that is and will continue to be its core business and driving force. SEI

Maddalena is a global player in the field of water and thermal energy measurement and smart metering. Since 1919 we have helped utilities, industries and end-users effectively manage water resources and data.