Energy storage installations around the world will reach a cumulative 358GW /1,028GWh by the end of 2030, more than twenty times larger than the 17GW/34GWh online at the end of 2020.

This is according to the latest forecast from research company BloombergNEF (BNEF), which estimates that this boom in stationary energy storage will require more than $262 billion of investment.

BloombergNEF’s 2021 Global Energy Storage Outlook estimates that 345GW/999GWh of new energy storage capacity will be added globally between 2021 and 2030, which is more than Japan’s entire power generation capacity in 2020.

Have you read?
GW-scale energy storage success requires new and innovative thinking
Integrating storage with transmission for a net-zero transition

The US and China are the two largest markets, representing over half of the global storage installations by 2030. The clean power ambitions of state governments and utilities propel storage deployment in the US. In China, the ambitious installation target of 30GW of cumulative build by 2025 and stricter renewable integration rules boost expected storage installations.

Other top markets include India, Australia, Germany, the UK and Japan. Supportive policies, ambitious climate commitments, and the growing need for flexible resources are common drivers in these regions.

Regionally, Asia-Pacific (APAC) will lead the storage build on a megawatt basis by 2030, but the Americas will build more on a megawatt-hour basis, because storage plants in the U.S. usually have more hours of storage. 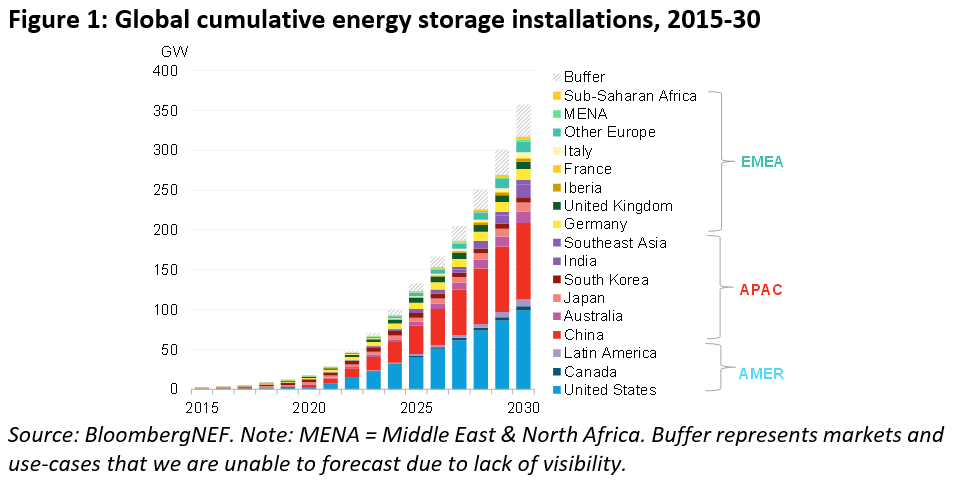 Europe, the Middle East and Africa (EMEA) currently lags behind its counterparts due to the lack of targeted storage policies and incentives, which may be surprising, considering Europe’s ambitious climate targets. Growth in the region could accelerate as renewables penetration surges, more fossil-fuel generators exit and the battery supply chain becomes more localized.

Yiyi Zhou, clean power specialist at BNEF and lead author of the report, said: “The global storage market is growing at an unprecedented pace. Falling battery costs and surging renewables penetration make energy storage a compelling flexible resource in many power systems. Energy storage projects are growing in scale, increasing in dispatch duration, and are increasingly paired with renewables.”

BNEF’s forecast suggests that the majority, or 55%, of energy storage build by 2030 will be to provide energy shifting (for instance, storing solar or wind to release later). Co-located renewable-plus-storage projects, solar-plus-storage in particular, are becoming commonplace globally.

Customer-sited batteries, both residential and commercial & industrial ones, will also grow at a steady pace. Germany and Japan are currently leading markets, with sizeable markets in Australia and California.

BNEF expects energy storage located at homes and businesses to make up about one quarter of global storage installations by 2030. The desire of electricity consumers to use more self-generated solar power and appetite for back-up power are major drivers.

Other applications, such as using energy storage to defer grid investment, may remain marginal in most markets out to 2030. Build could pick up, if regulatory barriers are removed and incentives are aligned for network owners to consider storage as an alternative to traditional infrastructure investment.

Yayoi Sekine, head of decentralized energy at BNEF, added: “This is the energy storage decade. We’ve been anticipating significant scale-up for many years and the industry is now more than ready to deliver.”

Rapidly evolving battery technology is driving the energy storage market. The report finds that the industry is adopting multiple lithium-ion battery chemistries. In 2021, lithium-iron phosphate (LFP) will be used more than nickel-manganese-cobalt (NMC) chemistries for stationary storage for the first time. LFP will become the major lithium-ion battery chemistry choice in the energy storage sector until at least 2030, driven by its dominant role in China and increasing penetration in the rest of the world.

BNEF also updated its technology outlook to include sodium-ion batteries, a lithium-ion battery contender, which could play a meaningful role by 2030.

Besides batteries, many non-battery technologies are under development, such as compressed air and thermal energy storage. Many of these can provide longer dispatch duration compared to batteries, looking to supply during prolonged periods of low renewable energy generation in future net-zero power systems.

However, BNEF expects batteries to dominate the market at least until the 2030s, in large part due to their price competitiveness, established supply chain and significant track record. If new technologies successfully outcompete lithium-ion, then total uptake may well be larger.