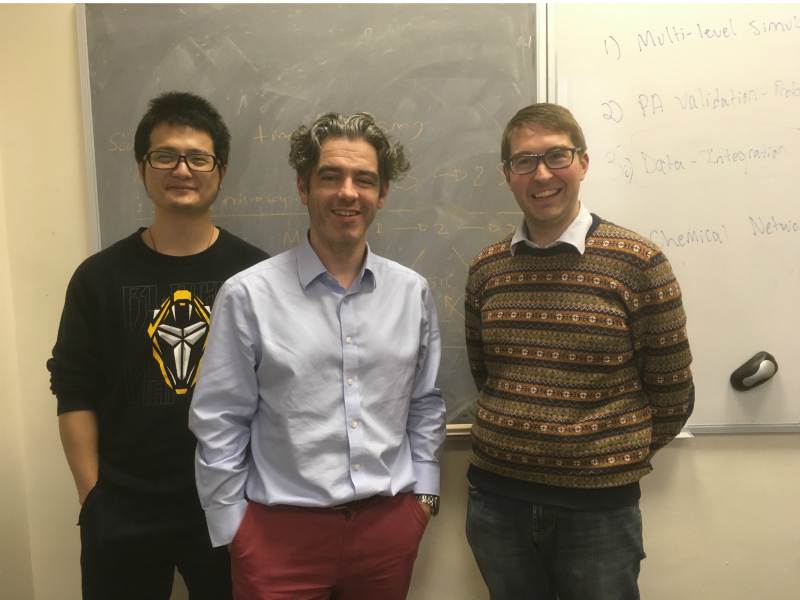 The University of Glasgow recently published a new paper in the journal Nature Chemistry concerning a new type of system that could revolutionise energy storage and drop the charging time of electric cars from hours to seconds.

Chemists from the University have developed a flow battery system using a nano-molecule that can store electric power or hydrogen.

The team consists of Professor Leroy (Lee) Cronin, the University of Glasgow’s Regius Chair of Chemistry, and Dr Mark Symes, senior lecturer in Electrochemistry, with the assistance of Dr Jia Jia Chen, a postdoctoral research associate.

They are convinced that this result will help pave the way for the development of new energy storage systems that could be used in electric cars, for the storage of renewable energy and to develop electric-to-gas energy systems for when fuel is required.

To find out more, Smart Energy International spoke with team member Dr Mark Symes to learn about their research and the potential impact on the sector.

The team and focus of the research

The work was performed through a collaboration led by Prof Lee Cronin from the School of Chemistry. The collaboration was based on finding new ways of using electric chemistry to store energy. By moving electrons from one element to another (redox reaction), electricity is generated.

In Scotland, there is a great deal of renewable energy, especially wind energy, and the team wanted to find ways to store that energy for use when the wind isn’t blowing. One of the best ways to do that is to build a redox flow battery, which is what they did with this project.

“What we found is that by using a type of liquid called a polyoxometalate, we can store a lot more energy in a given volume of liquid than in traditional models of redox flow batteries that use simple metal salts. We could pile a lot more electrodes into the liquid and dramatically increase the capacity of the battery.

“Merely by changing the chemical composition to a concentrated liquid containing the nano-molecules, the amount of energy it can store increases by almost 10 times. The energy can be released as either electricity or hydrogen gas, meaning that the system could be used flexibly in situations that might need either a fuel or electric power.”

Traditional solid state batteries which weigh the same whether they are charged or not, and take hours to charge through a wall socket are currently used in EVs. However, with the new type of battery, “you can refuel your battery with some of the electrolyte fluid that’s been charged remotely while you are at the petrol station, drive around and when all the energy has been given into the battery, you go back to the refuelling station, pump out the old electrolyte to be recharged and pump in new charged fluid,” says Symes. The amount of charging time would be reduced from hours to minutes or even seconds. The time spent refuelling would be equal to that of refuelling with gasoline.

Redox flow batteries are used in a commercial setting to balance the grid. Symes says: “If I have a wind turbine and some excess power, I can place a flow battery next to it, charge up my electrolyte and feed that into the grid at a later stage. The challenge with these redox flow batteries is that because the thing that stores the power is a liquid, it uses a lot of water and they tend to be really big and heavy. They can store a lot of energy but are very heavy to carry around with you.”He continues: “Our electro-baby holds more energy but could be a lot lighter and we are investigating how to make it portable, something an existing flow battery wouldn’t allow for. The aim is to make it light enough to carry it around in a car.

The current work is at proof of concept stage, which shows that it is possible to shrink the size of the electrolyte down to a size you can carry with you. The current electrolyte does have some problems connected with it. The biggest problem in terms of commercial application is scale.

The new battery system uses tungsten, which is reasonably abundant but not abundant enough to power all the cars in the world.Tungsten is a mined metal used in light bulb filaments in old incandescent light bulbs and in heavy metal alloys such as high speed steel, from which cutting tools are manufactured. It tends to have few uses in its pure form.

“What we want to do in the future is move to more abundant metals such as iron, which would allow for a greater capacity to manufacture tonnes of it and use it to power cars.

“We are currently up-scaling the tungsten system. There’s plenty of it to try up-scaling it and solving some of the engineering problems. We have also worked on a roadmap, laying out prototype devices, which we could fit into cars within the next five years.”

Implications beyond the electric vehicle

“Traditional charging infrastructure has given us this idea that you plug the vehicle into the mains and charge it up. One of the problems with that approach is if many people start doing that simultaneously, you will exceed the grid capacity,” explains Symes. “Even in a country like Britain with an intensive electricity grid, the predictions are that if people are plugging in 30 million hungry cars every night, the grid won’t be able to cope.”

Symes believes that refuelling electric cars using conventional batteries and plug-in charging will require a grid with double the capacity, a very expensive solution indeed. “If you can pump your electrolyte in and out however, you have the possibility to carry it around in tankers as we do now with gasoline. This would allow you to charge your electrolyte at a centralised facility, like next to a power station.

This would be cheaper and more workable in places where there’s electric grid infrastructure.” In order to maximise the capacity of renewable energy as base load power, it is necessary to store excess power and reduce energy peaks and troughs.

Innovation in this field will surely abound, enabling the power sector to balance the grid, while securing an energy efficient way to get around.

Prof Lee Cronin is the Regius Professor of Chemistry at the University of Glasgow. He has one of the largest multidisciplinary chemistry-based research teams in the world, having raised over $35 million in grants and current income of $15 million. He has given over 300 international talks and has authored over 350 peer reviewed papers with recent work published in Nature, Science, and PNAS. He and his team are trying to make artificial life forms, find alien life, explore the digitisation of chemistry, understand how information can be encoded into chemicals and construct chemical computers.

Dr Mark Symes is a Royal Society University Research Fellow and lecturer in the School of Chemistry at the University of Glasgow. His main interests are centred on small molecule activation and energy conversion. His research group conduct fundamental studies into the processes underlying reactions of interest, and tries to develop devices to apply the principles they have learned in a real-world setting.