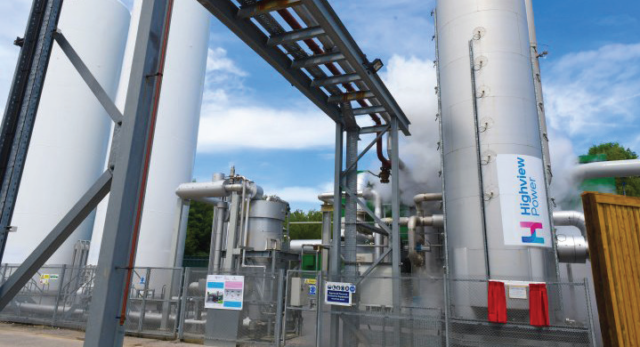 ‘The only reason we exist is renewables’, says the boss of energy storage firm Highview Power. Smart Energy International meets him to find out more.

‘Hydro in a box’ is how Javier Cavada, president of energy storage company Highview Power, describes the company’s technology.

The system uses liquefied air and other existing technologies to balance the influx of renewables that are increasingly coming on to systems.

Cavada holds a PhD degree in industrial engineering and joined Highview in 2018 from Wärtsilä. We caught up with him to find out more about his ambitions for Highview and the energy sector.

Tell us about the company and its technology

Highview Power is a 15-year-old, UK-headquartered company, but became global in the last couple of years. It was borne from the push by several environmental and university institutions looking to “get pumped hydro in a box”. They wanted to get the benefit of pumped hydro capabilities in the UK without having to bring in water, and given the topographical constraints, making it locatable.

So they took an existing technology that is utilised every day: the liquefaction of air to produce nitrogen and oxygen. In our case, we liquefy air and we don’t separate the components – we keep the nitrogen, oxygen and an argon together to get a cryo-fluid. To do that you need energy, so that’s the energy you’ve stored, and you can install as much as you want.

It’s a 700-times compression rate, so that means that 700 litres of air represents one litre of liquid liquefied air. You can have an enormous amount of energy storage in either big or small tanks. When you need it, you gasify it, and use clean air, just clean air that’s linked to a generator, and synchronously connected to the grid. So straightforward – pretty simple.

Highview Power has built two plants and a commercial demonstrator, and now we are building one of the largest energy storage plants in construction today in the north of England – and several more.

What’s the energy conversion rate of the cryo-battery storage system?

Definitely there is loss in every process of cooling down and heating up. If you were to take the process without the R&D and investment in IP technology that Highview has made, it would be a low-performance process. But we have invested in increasing the performance and output and we have a standard that is 60% run-through proficiency. We could get 70% or 80%, just by isolating heat and cold and recycling it throughout the cycle, but that means that it’s more expensive, so, you’d have a higher CAPEX. For now, our standard model is 60%, which we have been studying in terms of grid demand on the market, and frankly, 50% is already enough for what energy storage is targeting.

This is not generation. This is getting a source of power that is being curtailed from wind or wasted from solar and losses that are everywhere in the grid, storing it, and bringing it back to the grid in the best moment of demand. So frankly, the run-through proficiency is not really the most relevant factor, unless you’re talking about very short duration schemes.

We talk about multiple hours, multiple days of storage, and this model is a bit like pumped hydro in terms of fast, similar efficiencies.

What are the technology’s component parts?

We use processes that are proven and have been financially demonstrated hundreds of times in Europe, the UK, the US, Asia, Africa and the Middle East, Australia… everywhere.

We use a liquefaction system block cycle to liquefy air, and that’s being used to produce nitrogen and oxygen for industries and for healthcare. We use tanks to store the energy – tanks like those used for LNG – and we use steam turbines and air turbines that would be used for nuclear or compressed air and other applications that would steam as a generator.

How does the technology compare with a lithium-ion battery system?

We have a liquefaction system and a charging station, and these are the most expensive pieces of the kit. The battery cell for our system is the tank in the middle. The tank is the lowest cost of the system, and you could say increasing megawatt-hours storage requires a negligible change of the CAPEX and the OPEX.

Something important to bear in mind is that we fully replace the services that thermal does. Thermal ensures synchronous generation, inertia, and rotating equipment.

We have rotating compressors, massive turbines and generators. We fully balance the grid.

What value does the technology have for grid system operators as we see more and more variable renewables come onto systems?

The only reason we exist – why we implement our technology on the ground – is renewables. If you don’t have wind and solar taking over capacity on grids, you don’t need energy storage. If you want to continue running gas and fossil fuel, there’s no need for this type of storage. We were born to make renewable energy dispatchable 24/7, 365 days a year.

Highview has formed a joint venture with Sumitomo Heavy Industries. Why?

We are quite a humble company – we know we cannot build a thousand plants ourselves every year. We need strategic partners who want to jump into the same boat, breathing the same air, with the same target. Sumitomo Heavy Industries is a very strong engineering house globally, headquartered in Japan, but physically present in the US, Europe and many other regions.

This market is declining and they have been ambitious, strong and visionary enough to see that they want to invest in technologies that they will be able to contribute to with their engineering capabilities and global resources.

We have our own reputation individually, but Highview is a young company, so it’s always great to partner with somebody with 150 years of great history behind them.

If there was one goal that you set yourself as president of Highview Power, what would that be in the short term?

During the months of lockdown and the given health situation, we have seen the impact we have as a society on the environment and economically. But we can see what it would look like if we were to make a step-change.

My wish is that we accelerate and change gear to maximum speed. It’s not about stopping or damaging anybody using traditional technologies – it’s about transferring those skills. Sumitomo is a clear example of transferring all those great skills, and using our technologies, utilising the infrastructure used by oil and gas, and giving them a new purpose. That is the story of clean energy. It’s about the speed of the transition.