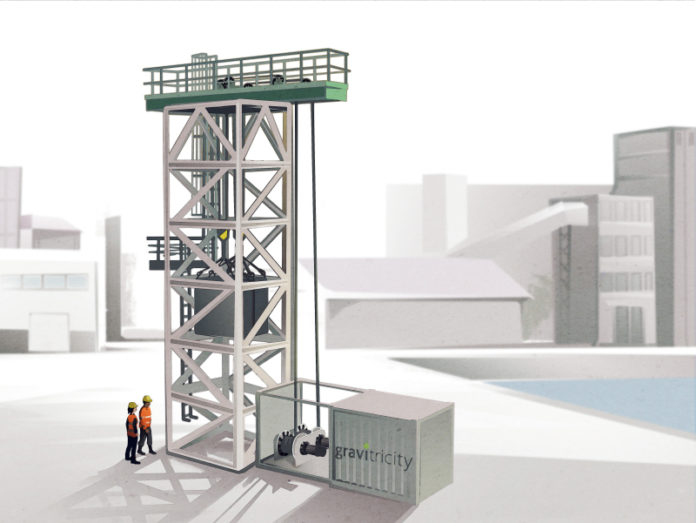 Huisman, the international winch specialists, have begun fabrication of the system at their factory in the Czech Republic. Completion is expected in December.

The custom-built winches and control system will be shipped from Rotterdam to Leith. At the same time the 250kW demonstrator’s lattice tower is being fabricated by Leicester engineering specialists Kelvin Power.

Assembly of the full 16-metre high rig will then take place at a grid-connected site at the port of Leith for testing to begin in Spring 2021.

The demonstrator will comprise two 25-tonnes weights suspended by steel cables, which are raised and lowered respectively to store and release energy.

In one test, the weights will be dropped together to generate full power in order to verify the speed of response.

“We calculate we can go from zero to full power in less than a second, which can be extremely valuable in the frequency response and back-up power markets,” says Gravitricity Lead Engineer Miles Franklin.

Further tests will follow with the two single weights dropping one after the other to verify smooth energy output over a longer period. A programme of other tests will be carried out alongside these to demonstrate and refine the full capabilities of the system.

The tests are expected to last two months. The aim is to confirm the modelling and provide data for a full-scale 4MW project to commence later in 2021.

Gravitricity believes that longer term the system can be scaled up with multiple heavy weights totalling up to 12,000 tonnes. The company plans to roll out the technology in disused deep mine shafts worldwide. With many of these in African and other emerging countries, the technology could become an enabler of remote electrification. Local microgrids to power mining operations also could be supported.

Edinburgh-based Gravitricity says it has raised over £1.5 million for the technology development through a crowdfunding campaign. The initiative also is supported with a £640,000 grant from Innovate UK, the UK Government’s innovation agency.