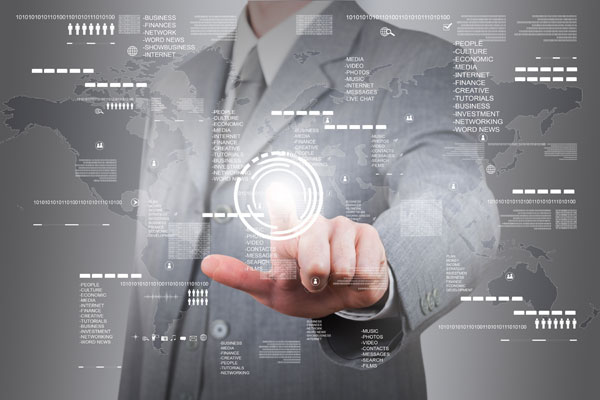 A ‘thin client’, sometimes called a lean client, is a low-cost endpoint computing device that relies heavily on a server for its computational role. The term thin client is also used to describe software applications that use the client – server model in which the server performs all the processing.

Thin clients and other lean devices rely on a network connection to a central server for full computing and don’t do much processing on the hardware itself1. Typically, the user will access the data on the server via a web browser or similar application with any analytical computation requested being performed by the server. There are many examples of this arrangement, some of the most ubiquitous being web-based e-mail, modern point of sale devices and numerous Google applications.

The idea of a thin client is also central to the ‘Internet of Things’ where hardware devices used to connect the user to the item do nothing other than convey a set of data to a server which is accessed by the user (to check on the status of a device or to inform the consumer of their consumption profile, for example).

Thin client architecture harks back to the early days of centralised mainframes and minicomputers. In the 1970s and 80s, computer users often interacted with a terminal that only received input and returned output, and all data processing was performed in a centralised server. There were many reasons why this was preferred which are still relevant today, cost being one of them.

Thin client hardware is often far simpler because it doesn’t require big processors or hard disk drives. Another reason has to do with backups and disaster recovery. To create back-ups for all users in a thin client environment one needs only to back-up the server, making disaster recovery a far simpler process than it would be if each user had their own processor or database.

How does this relate to metering today and what is the potential effect on the meter manufacturer?

The implications of thin clients for the metering industry are significant. Given that the very nature of a true thin client negates the need for any intensive hardware requirements in the meter, it follows that the meter itself may be stripped of all decisionmaking functionality with all critical and other decisions being made by a central management server.

When a consumer wants to access facts and figures about their account (consumption for a particular day or load profile over a period of time, for example) they won’t obtain it from the meter, but from the management server. Furthermore, it would be the server telling the meter to switch on, switch off, load limit, etc. without the meter having any input in this process.

For meter manufacturers this is not necessarily a good thing as it has the potential to move the focus from the hardware to the software. By stripping down the real meter functionality to its core (for example, using the meter simply and only to relay real-time consumption information back to a central server) a manufacturer will be left with very little, if anything, to distinguish its meter from its competitor’s. With the emphasis then falling onto the related software offered, any number of specialised software vendors could venture into a space currently dominated by a few multinationals with meter manufacturing muscle.

“In-Home-Displays for instance are already an out of date concept given the prevalence of smart phones,” says Aidan O’Neill, a director at Prepago.ie, a prepaid metering company in Ireland. “The IHD is now an app. It is now possibly the only interaction channel a consumer has with their utility supplier. As the app data is only updated when the customer is browsing and researching their usage, it is a small overhead.

Also, the software is updated and deployed centrally; so all users have the most up to date/secure software. It also offers a wider use of technology to meet consumer needs. For example, we offer a “key-word” based SMS channel for older customers, mostly with sight issues, so they can access data without using an app, as it enables voice operation.

” He continues: “Meters have become generic; the job is to meter and register usage and load restrict. The type of unit is not important, nor are the communications protocols used – it doesn’t need to be ‘bleeding edge’ technology. The data needs to be secured in the register and between the origin and destination. What is vital is the security of the meter register – everyone in the chain needs to be confident of the data reference point.”

Something to also consider here is that an effective thin client set-up hinges on one critical component, and that is communication; and communication can be very power intensive, especially when devices are communicating over extended distances. Thin clients rely on a constant, stable link with the server, without which they simply cannot operate. In the world of smart electricity meters where access to power is a given, this is not necessarily a major concern, certainly given the abundant communication links available in first-world countries today.

O’Neill comments: “Communication is important but it is approached as a managed resource. The variable meter polling frequency cycle is a well-known and evolving concept. Depending on the application, some operators will poll some meters more frequently than others. In prepay smarter communications strategies are used to generate graduated and targeted readings.

This is particularly true with newer developments – in our recent electric vehicle recharging station deployments, a 24 hour reading cycle is not practical in a heavily used but shared parking space, so we poll a 32 amp meter every 15 minutes and can poll a 64 amp meter every 5 minutes.

” Another concern with regard to thin clients has to do with the movement and volumes of data. Smart metering inevitably increases the volume of data utility providers must handle. In the residential arena, for instance, hourly reading intervals may replace 4 or 12 annual reads per customer with 8,760 hourly reads per annum. That represents a 730-fold increase in information that many billing systems may not be able to handle.

To solve the problem of too much data, utility providers moving toward smart metering increasingly implement a meter data management (MDM) application specifically designed to gather large volumes of data from multiple meter types, store it, and process it according to specific utility needs2.

“The number of metered points and their direction is changing. Big data analysis on live data and grid planning opportunities are simply not possible in a meter based analytical approach – the data transfer would be intensive,” says O’Neill. “The requirements are getting more complex as consumers are installing on roof solar systems for power which mean it is not just power consumed that needs to be tracked but now also any power being transferred to the grid. In parts of the US, water metering into the property is also accompanied by water metering out of the property.”

So why would a utilities provider consider implementing a thin client metering environment?

The benefits of thin client applications or devices are numerous, including:

There is every reason to believe that thin client metering will become more prevelant, particularly in the prepaid industry. It offers consumers the potential to reduce metering costs with numerous online applications allowing the user any number of tools to view and manage consumption. It is debatable as to whether or not we will enter a world based solely on this technology, but the advantages are real and clear to see.

The pitfalls of data management, battery life and speed of display will be overcome as internet speeds increase, battery and communication technology evolves, and systems evolve to manage mountains of data. At the end of the day it will be the stakeholders who dictate the way forward. Time will tell.MI

Thin client infrastructure for metering With sincere thanks for Aidan o’Neill for his assistance and insights. gy evolves, and systems evolve to manage mountains of data.