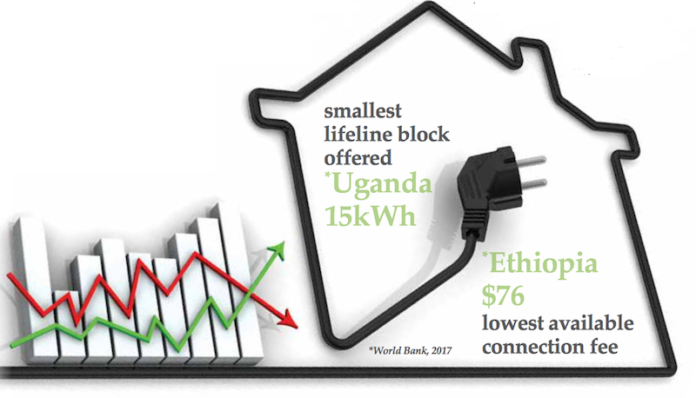 Cost-reflective tariffs are an on-going, much talked about topic but why do they continue to be problematic and what are the possible solutions? Daniel Njoroge Butti, energy economist lecturer at Karatina University, a public university in Kenya, explores this trending topic.

This article was originally published in Smart Energy International 3-2018

Policy makers have consistently found themselves faced with a policy dilemma, trying a tradeoff between cost-reflective tariffs and subsidised tariffs – or what politicians will refer to as a pro-poor tariff. I subscribe to the school of thought that fronts the argument that all citizens in an economy should enjoy access to affordable electricity, which can be achieved through government cost-subsidising tariffs.

The entire discussion around cost reflective tariffs versus cost-subsidised tariffs revolves around power purchase agreements (PPAs), which governments enter into with energy investors. What one needs to understand is that the manner in which PPAs are drawn up is over long-term periods – usually 20 to 25 years – and so agreements dictate that for example X amount of billions of dollars is paid for generation of electricity to grid connectors. What this does is to lockdown costs during this period. This means no adjustments; hence, the tariffs will not be cost-reflective over the term of the contract.

Another aspect is that in Kenya for example, electricity consumers’ and end users’ bills (for both domestic and industrial consumers) have for a long time not reflected what I would refer to as pass-through charges. These are charges such as adjustments that involve inflation rates, exchange rates and cost of living fluctuations, which in a real sense periodically keep changing. As such, very few adjustments are drawn and captured in power bills. On the other hand, infrastructural costs, or what can be referred to as highway costs, are borne by the government.

What would happen in the event that infrastructural costs were passed on to consumers in the form of high tariffs? It would be chaotic, given that only a few consumers would get access to electricity, making most of the economy redundant. Furthermore, not many consumers understand the nitty-gritty or the components in their bills, which in itself is a challenge that must be addressed.

In a recent scenario in Kenya, electricity generators incurred KES10 billion ($99 million) and Kenya Power – the grid connector, which is also a retailing and distribution company – believed it to be prudent to pass the cost on to consumers in the form of high tariffs. Consumers were also burdened with the higher tariff being back-dated for three months.

Naturally, this brought about an uproar among the general public, given that most of them cannot afford high electricity prices. What the government did then was to direct Kenya Power to suspend the pass-through charges, and levy the lowest tariff possible to clients with the government offering to reimburse and offset the balance. This is clearly not cost-reflective.

The resultant negative impact is that since electricity users are aware of the subsidy programmes by government, there is a tendency to be extravagant and not efficient in their power consumption. This would not be the case should the cost have been borne by the consumers – feeling the pinch would have been a good motivator to use electricity efficiently.

In another scenario, in the Southern African Development Community region, the five-year period through which all member states were supposed to have transitioned to a cost-reflective tariffs regime saw only Namibia and Tanzania attain this resolution.

In my view, this thematic issue needs to be seen in the totality of the entire economy and not in isolation. In South Africa, for instance, the National Energy Regulator has a mandate to improve social equity and address the requirements of low-income households. This is not going to be achieved if the South African government embraces a cost-reflective tariff. Rather, governments need to come in with a form of cost-subsidy tariff.

Countries such as Germany, China and most of the OECD countries in Europe are pursuing a subsidy tariff regime, particularly in the renewable energy market. Only Australia and parts of the US (New York and Virginia) have walked away from cost-subsidy tariffs.

It is my opinion that developing economies are not ready for cost-reflective tariffs; therefore, governments ought not to rush on this issue. There are a number of approaches that African governments need to take into account as they walk across this terrain.

Firstly, there should be a mechanism developed on how to encourage consumers to be aware of the tariffs they pay vis-à-vis the amount that governments pay for them, so as to really understand the value they get on their power. By understanding the cost allocated to them, they will be more efficient in their power use and avoid extravagant use of power altogether.

This cost-subsidy can be partial or in full, depending on a case-by-case scenario but mostly partial cost-subsidies are recommended. Therefore, civic education needs to be encouraged in this area given that most consumers do not understand the components in their electricity bills.

Secondly, issues of cost-subsidy tariffs – as seen in economies such as Germany and China that have felt the burden – call for a need to allow government to conduct cost adjustments on pricing as well as introduce a legal mechanism, so as to carefully balance the need for universal access to energy for all with cost issues.

As such, the issues of efficiency and affordable power to end users on the service provider’s part will be attained. This will afford grid connectors the discretion as to which energy power source they should purchase, which will translate into affordable tariffs for end users.

Another issue is inefficiency in capital procurement and expenditure, and in operational expenditure, which makes the cost of providing electricity expensive. These costs inflate tariffs for poorer consumers, making a cost-reflective policy regime too high for many in developing economies.

What is the remedy?

Regulators should propagate and enforce prudent administrative and managerial procedure, especially in areas of both capital procurement and operation expenditure, to reduce the cost of providing the service. This will include dealing with mismanagement, which is a corruption issue as well.

In addition, delocalisation and deregulation of the energy markets is a perfect approach. There is a need for one central control unit, perhaps the grid connectors, but the law should allow energy investors and generators to sell energy directly to grid connectors as well as provide the means to deliver electricity to end users. This is what is envisaged in the Energy Bill currently before parliament in Kenya.

Remember the contention has always been that the producers want costs to be reflective but energy consumers want costs to be subsidised. Policy makers in the energy sector need to strike a balance between these entities. In many countries, the issue of generation, transmission and distribution, and the entire supply chain, ought to be borne by the investors. This has been the case in many countries but in most African economies these infrastructural arrangements and costs have always been treated as highways, which belong to governments and are borne by the governments.

Armed with a Masters in Economic Policy and Management from Makerere University, Daniel Njoroge Butti lecturers at the School of Business, Karatina University on economics and policy analysis, and is a Lead Research Analyst for GBS AFRICA on energy issues. He is currently undertaking a study on: Geopolitics of the East African Oil & Gas pipeline.

The conversation around the underlying issues must be looked at with a wide lens, by the entire stakeholder spectrum, if one looks at adopting policy around the tariff issue: