The term ‘smart meter’ has been fluid over time, with a somewhat different meaning in 2018 than in 1998, and potentially something else entirely in 2038. Today, a smart meter is a two-way communicating digital meter, found most prominently in the electricity sector.

Smart meters are also used by water and gas utilities, though adoption has been slower in those sectors. Smart meters are often described as the building blocks of the oftmentioned ‘smart grid,’ and are integral to any discussion of smart grid infrastructure. It is important to understand not only the technological functionality of smart meters, but also the evolving framework by which utilities are procuring these systems and how the value of smart meters will be maximised in the coming decades.

The basics of smart meters

The smart meter itself is part of a broader ‘advanced metering infrastructure,’ or ‘AMI’ (the terms AMI and smart meter are often used interchangeably). Internal to the smart meter are its components such as microcontrollers, disconnect switches and network interface cards. The other infrastructure includes components such as the communications network, a meter data management system, and other software and analytics. The smart meters themselves are only one piece of the smart grid puzzle, albeit a very important one.

So, what is the role of meters in all of this? Their primary purpose has remained the same as any energy meter for the past century: to measure energy use. Even if their functionality was limited to this purpose alone, smart meters would still represent a significant improvement over their predecessors, as they provide more accurate readings, allowing for more accurate billing at lower costs. This results in a more efficient ‘meter-to-cash’ process at utilities.

Other benefits of smart meters with vast potential are the ones created by all of the new data. Older non-communicating legacy meters measure total energy consumption, and only do so at monthly or quarterly intervals. That’s one data point per month or less. AMI meters are capable of measuring consumption, voltage, and other parameters in real-time. That’s a lot of data from which many important patterns and insights can be gathered. Smart meters serve other basic functions too: they are watchdogs for electricity theft. They can also quickly launch notifications when there are power outages (the so called ‘last gasp’ function). They can allow utilities to implement dynamic pricing, time-of-use rates (TOU), and related demand response programs. Broadly speaking, they can improve the reliability of electricity service. But like any emergent technology, the rise of smart meters has been accompanied by challenges.

Unsurprisingly, smart meters are significantly more expensive than legacy meters, with an all-in cost that can rise above $200 per endpoint in developed countries. This is a significant investment for any utility, and for many can prove to be an unsurmountable obstacle to AMI deployment. Another concern is security, as is to be expected when the accumulation of personal data is at play. A cautious approach to data security has slowed the adoption of smart meters in some major markets, notably Germany. AMI deployments are also large and complex undertakings, often taking years to plan and carry out. 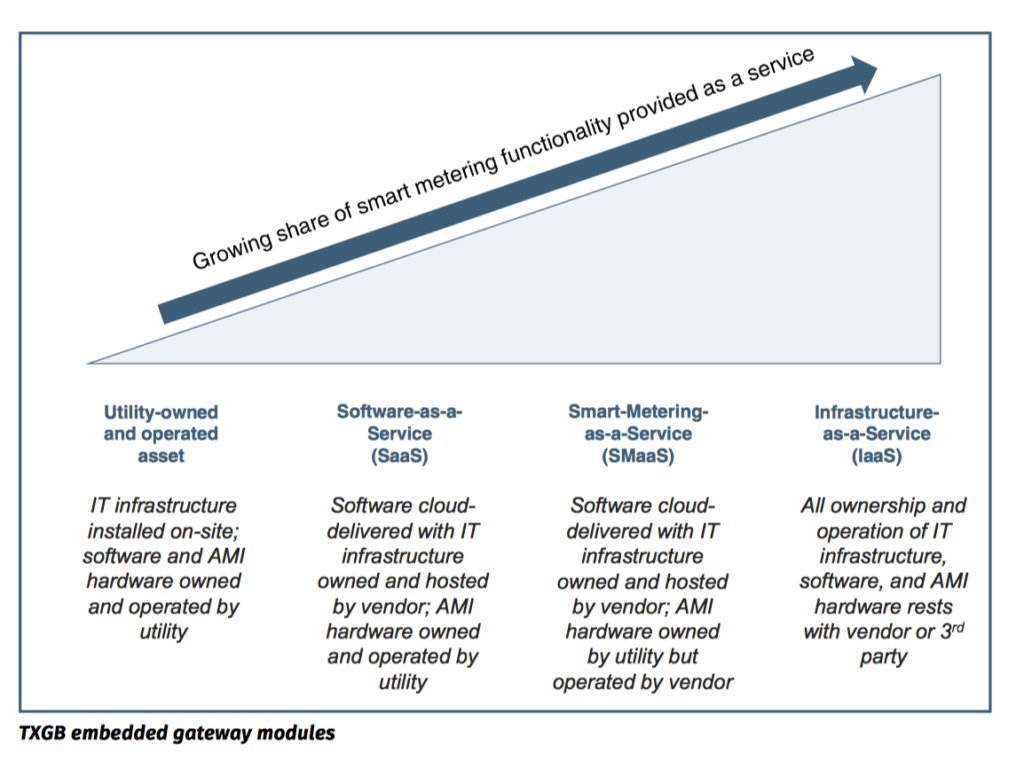 Of course, the pre-eminent challenge remains cost, and the required investment must be justified by the expected returns. A key challenge for smart meters today is that the real-time data is not being fully leveraged for maximum benefits. As illustrated above, a utility that uses smart meters for its basic function will see some benefit, but there is immense potential left on the table. In the United States, for instance, only about 10% of utility customers with AMI meters are utilising dynamic rates. Beyond this, utilities must make further investments for complex data analysis in order to realise benefits from the original investment. Unfortunately, it costs money to save money, and many utilities are not in a position to spend after having just made a large investment in smart meters in the first place. A new trend known as ‘managed services’ is beginning to change this.

At the end of the spectrum, full managed services (often called Infrastructure-as-aservice) delivers the entire AMI system as a service, in which physical infrastructure is owned by third-parties and leased to the utility, while all IT needs are cloud-hosted rather than installed on-site.

Why would a utility opt for service-based smart metering? Because it addresses many of the AMI challenges described above. Entrusting data to a sophisticated third-party usually provides more security than can be accomplished by the utility alone where cybersecurity skillsets may be underdeveloped. Deployment time can be cut in half when IT infrastructure is hosted in the cloud, while in-house staff does not need to be trained to operate the complex new systems. Perhaps most importantly, managed services can help mitigate the significant upfront costs of smart metering systems. Service-based offerings convert costs from an upfront capital investment to a recurring operational expense. This opens the door for utilities that cannot make such a large initial investment. These utilities, usually smaller in size, do not have the benefit of economies of scale. In essence, they are borrowing economies of scale from vendors. However, there is an inherent obstacle to this new opportunity: most utilities are still regulated under the traditional costof-service model in which SaaS and other service-based investments are still treated as O&M and not capital investments. There is a disincentive against those service-based products that remove the need to invest in sometimes inefficient and outdated capital equipment. To give managed services a fair chance, regulations must evolve. Regulators in some states such as New York and Illinois are taking the lead in this regard, and the lessons are sinking in slowly in other regulatory jurisdictions.

Managed services give a glimpse into where the industry is headed, how those utilities that have yet to deploy smart meters can do so, and how those that have completed smart meter deployments can extract greater value from them. It will also be an economic opportunity as the service-based model, which creates affordability and flexibility for customers, provides recurring revenue for vendors. Several major metering vendors are pivoting to a services-oriented business model in which smart meters are one feature of a larger, services-based package. These packages are often designed around promised results backed by Service Level Agreements (SLAs).

The arc of technological growth in smart meters is beginning to level out, and the major innovations are now taking place in models of smart meter use, delivery, and ownership. The emergence of managed services has opened the door to new potential customers and new possibilities for existing customers. Only a small share of smart meters are currently under these service contracts, but that figure is expected to increase over the next several years. Thanks to these innovative business models, the full value of smart meters made possible by decades of technological advances – will be achieved on a wider scale. In addition to improving utility customer satisfaction, this will create significant gains in energy efficiency and reliability, which has been the essential promise of the smart grid all along. MI