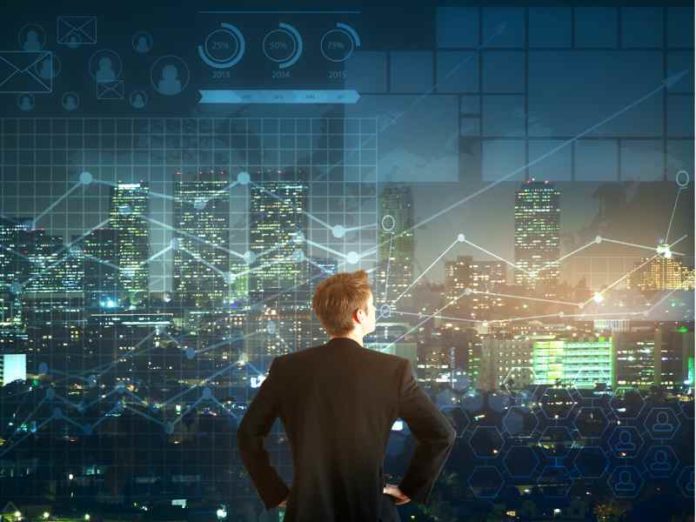 With the World Cup, Russia is the center of the world at the moment. This is a good opportunity to ask ourselves where Russia stands on digital markets.

The digital market of Russia has not yet been transformed into any major shape or form. Not in the sense that has seen the surge of the Chinese market, let alone of other industrialised economies, according to IDATE Digiworld, a technology research and advisory company.

The digital days of Russia lie ahead, in the future. The sheer size of its population is not enough to compensate for the low level of monetisation in society, nor for the somewhat lacklustre adoption of recent technologies.

Today, for sure, Russia is still far behind the USA and Europe — even when referring to individual countries and not the European space as a whole. Similarly, it drags its feet behind China. Among the special shortcomings of today’s nascent digital Russia are TV/video, 4G, cellular M2M (except for connected cars) and Internet services — the latter are often known locally as ‘RuNet’.

Even though Russia’s positions on the Internet services markets can be barely called strong at present, those markets are expected to grow fast during the period 2017-2021. Thus, CAGR for the video on demand market will constitute enormous 38% which is much higher than in China, USA and Japan. Online advertising and OTT communication markets will also show rapid growth during these years, with Russia always the leading country in terms of growth. 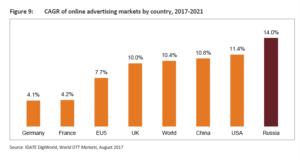 The Russian digital market has a Chinese lookalike

This description of Russia could globally apply to China too: the emerging country that can already be classified as developed rather than emerging for digital markets and technologies.

Russia has strong telcos, all of them Russian, with the fiber leader, Ros Telecom, under State control. Its major Internet players are also Russian, with Yandex (search engine) and Mail.ru (mail services, but including also leading social networks OK and VK through acquisitions) as the clear leaders and outpacing US providers of similar services.

There are also a wide variety of e-commerce providers. Yandex and Mail.ru have been prolific diversifiers, including into successful online taxi services or – to be expected – in the digital marketplace.

In addition, like China – with whom many observers find a wealth of resemblances – Russia is not a fully open market. Control by the State is frequent, leading to some usage restrictions officially for security reasons (blocking) while strict regulations impose the need for some operations to be local (at least local servers). Russia is also developing its own digital plan with a focus on smart cities and some local technologies (such as location with GLONASS).

The comparison with China stops here, as the amounts involved are not in the same order of magnitude. Public funds in Russia are clearly smaller, while the domestic market is too small to generate sufficient finance to invest into more fundamental technologies.

This has been the track taken by US-based players (and now by Chinese players), i.e. to develop the dual platform strategy. Indeed, most public policies aim at deploying technologies (and therefore at developing markets) rather than developing the technologies themselves (and thus engendering an ecosystem).

The Russian digital market is not as closed as the Chinese either. A raft of rules (often poorly enforced) has not prevented foreign companies from establishing themselves firmly around communications tools, video on demand (Netflix) or e-commerce, as stressed by the fact that Alibaba is the leader here in Russia!).

While not themselves being leaders, Google and Facebook also have significant market shares in Russia, whereas they are fully blocked in China. On some markets, Russia is indeed closer to the European approach with its predominance of the US Internet giants.