The British government has said that it expects there to be tens of thousands of electric and hybrid cars on the country’s roads by 2015, with that number reaching six figures by 2020. But realistically are we at a tipping point for electric vehicle adoption, as the industry claims? Or, are there still perceived barriers that urgently need to be overcome to make this move to EVs a reality?

With the announcement in September by Transport Minister Norman Baker of the government’s ultra low emission vehicles strategy, EVs are becoming an increasingly attractive option. The results of a survey from Censuswide and Rexel revealed that almost half of British drivers (41%) would consider purchasing an EV or hybrid vehicle in the next five years. This is supported by encouraging statistics from the Society of Motor Manufacturers and Traders (SMMT), which revealed 1,885 electric vehicles had been sold by the end of July this year – an improvement of 70% on the same period in 2012 and eleven times higher than the volume shifted over the whole of 2010, suggesting the market for the ultra low emissions vehicles is building.

These figures are encouraging; nevertheless something is still holding consumers back when it comes to mass adoption, and this obstacle needs to be addressed if we are to increase EV numbers consistently to meet climate change targets. The WWF and the Committee on Climate Change say at least 1.7 million EVs need to be on Britain’s streets by 2020, and 6.6 million a decade later, if the country is to meet these targets.

One of the main and often-quoted concerns from consumers regarding EVs is the lack of infrastructure required for electric to be a viable option. Further findings from the Rexel survey found that an overwhelming 72% of drivers had never seen an EV charger, and 62% perceived that the insufficient number of charging stations currently made EVs an impractical choice over diesel/petrol fuelled vehicles. There are currently, approximately 3,000 publicly accessible charge points in the U.K. and the government is committed to supporting the market by investing £400 million over the next two years in EV. This includes a £37 million funding package for home and on-street charging, as well as charge points for parking vehicles at railway stations. This commitment to investment in EV infrastructure has been strengthened recently with a resolution passed by the European parliament which will compel the U.K. to install a network of 70,000 EV recharging points as well as hydrogen and natural gas stations by 2020. The draft directive that aims to reduce dependence on oil and boost take-up of alternative fuels, looks to help achieve a 60% cut in greenhouse gas emissions from transport by 2050.

A lack of charging points wasn’t the only concern highlighted from the research. It also revealed that fears around upfront costs were a main sticking point too, with 60% citing this as a concern. These financial concerns highlight a lack of awareness of the government incentives available to encourage adoption, such as the plug-in car grant. The grant, which has been available since January 2011, offers consumers and businesses with a U.K. address 25% off the cost of a qualifying ultra-low emission car, up to a maximum of £5,000.

A further worrying statistic is that 30% of Brits have no idea who they would go to for advice on EVs and how to charge them, while 50% believe that they should ask a specialist manufacturer in EV and 20% think their local garage would be able to help.

It’s clear that there is a fundamental lack of understanding and awareness when it comes to EVs, and the rate at which the market develops in the U.K. will be determined by a range of factors surrounding consumers including awareness, acceptance and rising oil prices. Ultimately the need to reduce emissions and hitting national targets will drive investment from government, however mass adoption will only be truly viable if the consumer understanding gaps are addressed.

The responsibility for this education falls not only on the shoulders of the government but also on everyone in the industry including car manufacturers, distributors and even charger installers, to reassure and show that the necessary infrastructure will be in place in the not-too-distant future. We need to also ensure that we are equipped to be ready to accommodate an even more rapid rate of growth should this occur. For the EV market, 2014 will be an important year for this preparation. 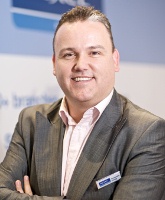 About the author
Brian Smithers is strategic development director, Rexel Northern European Zone. In 2004 he assumed the role of Managing Director for WF Electrical, a long established and highly respected trading division of the Rexel Group, the world’s number one distributor of electrical supplies. Over a 5-year period, he has overseen the metamorphosis of the business from a successful distributor into a leading solution provider, sustaining healthy growth via sector selling, development of new markets, and more latterly, total energy solutions.