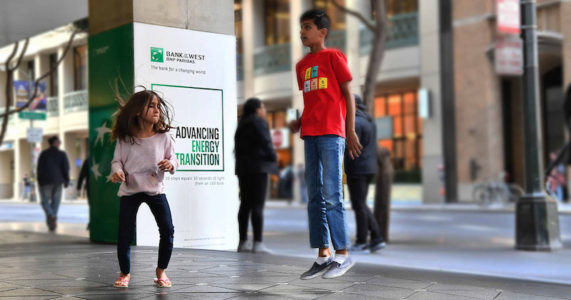 The exhibitions saw a grid of tiles deployed in high foot-traffic areas in San Francisco, Sacramento, Portland and Los Angeles. Large screen monitors monitored steps, each contributing to achievement of the city’s goal, which ranged from 50,000 to 150,000 steps.

The Sacramento, Portland and Los Angeles installations featured archways which illuminated to demonstrate the energy being generated by passers-by.

“Hosting these smart tile installations was an interactive way for us to demonstrate energy transition and give people in the Bank’s local footprint a first-hand look at what the future of energy could look like,” said Ryan Bailey, retail banking head at Bank of the West.

“Showcasing alternative energy sources, such as pedestrian footfall, is just one of many steps we’re taking towards supporting a positive, sustainable future for our communities.”

Upon reaching the step count goal in San Francisco, Sacramento, Los Angeles, the bank made a $10,000donation to GRID Alternatives, a non-profit organisation which provides solar power and job training to low-income households. The same amount was donated to Ecotrust, which works to create a climate-smart economy.

“Like Bank of the West, GRID Alternatives and Ecotrust strive to make a positive impact in their surrounding communities, and as such, were perfect recipients for the donation from this event,” said Bailey. “These organizations are working hard to make progress in making clean energy affordable and accessible for all, and we’re thrilled to contribute to their efforts.”