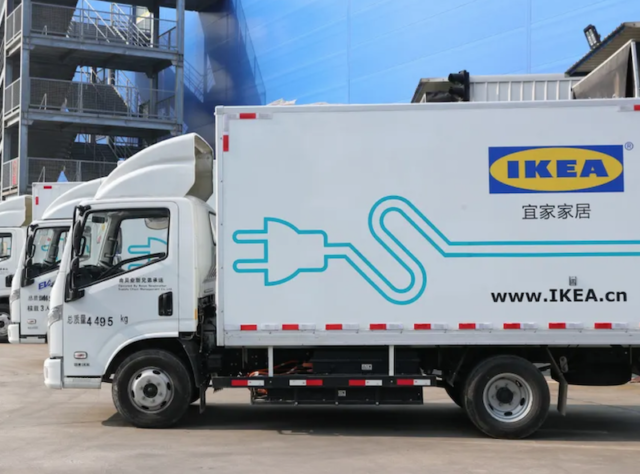 As of January this year, the goal has already been reached in Shanghai.

Says Angela Hultberg, who oversees sustainable motility for Ikea parent Ingka Group: “We wanted to challenge both ourselves and others, and Shanghai is one of the biggest cities in the world. A city that struggles with air pollution, the very problem we’re trying to address, seemed like a perfect place to start.”

Partnering with locally-based warehousing and distribution company, Beiye New Brother Logistics Company, “which has been willing to change along with us,” Hultberg says.

The rollout of the electric vehicle scheme has been made possible through a partnership with DST, a Shenzen-based company that leases out electric trucks and vans. Furthermore, New Brother, Ikea’s Chinese logistics partner has purchased a handful of electric delivery trucks.

DST manages over 16,000 logistics vehicles and has thousands of charging stations in major cities like Shanghai. Access to DST’s shared fleet has allowed Ikea to cut months off the timeline.

Ikea is working to reach 100% zero-emission deliveries in other cities that don’t yet have a robust EV-sharing network. The company is also exploring smaller deliveries utilising electric cargo cycle and utility tricycle.

This philosophy is being carried out by other companies such as UPS and FedEx who are also working to shift to low-emissions fleets. UPS has begun piloting deliveries by electric bike.

Ikea is also trying to change customer behaviour to encourage low-emissions transport. According to Eillie Ansilotti, writing for Fast Company: “part of the company’s expansion strategy will be to site smaller stores in urban cores–rather than locating enormous stores on the fringes–to encourage customers to reach them via transit, walking, or biking.

“In Shanghai, a new Ikea store, slated to open in 2020, will connect directly with the city’s Metro system. Rather than the 400,000-square-foot boxes now common across the U.S., the new Shanghai store will be relatively smaller: 269,000 square feet.”

Allowing Hultberg to have the last word, she says: “What we did learn, and what can be applied in all markets, is that in order to succeed, we need the right partners, and the courage to challenge our current ways of working.”