The South African electricity industry is in a phase of rapid change, driven by the current electricity crisis. This is primarily as a result of underinvestment in power generation projects over the past 10 years. This situation has been exacerbated by underinvestment in transmission and distribution infrastructure.

As a result, the South African government and Eskom have identified demand side management (DSM) as an essential solution for reducing electricity demand while generation capacity is increasing.

Smart metering is seen as a key component in the implementation of an effective DSM programme. However, there is uncertainty about technological expectations for smart metering. Frost & Sullivan’s analysis shows that the viability of the introduction of smart meters will depend on whether the key role players overcome certain critical challenges.

OVERVIEW OF SOUTH AFRICA’S ELECTRICITY REQUIREMENTS
The basic balance between power demand and supply has not been realised in South Africa, translating into recurrent electricity outages. In addition, total energy losses reached 8% in 2008. It is clear that additional generation capacity is urgently needed, together with improved management of current resources, if the country is to build up a margin of between 10% and 15% in the foreseeable future.

Eskom has identified several options that could help it mitigate the current electricity crisis in the country. The development and implementation of a smart metering programme in conjunction with time-of-use (TOU) tariffs that adjust prices upwards during peak times, is seen as one of the main strategies.

TOU: WHICH TARIFF?
The implementation of smart meters will drive the need to set up TOU systems. The ultimate goal is to help change customer electricity utilisation patterns. Although TOU is not a new idea, the inability of current meters to identify consumption patterns is preventing its implementation. In addition, the rollout of a TOU system will require transparency regarding peak, standard and off-peak periods.

Time-based billing for electricity in South Africa could prove successful because it reflects costs more accurately and would help improve economic efficiency. However, it remains to be seen if end-users will easily adopt a system that may increase their electricity costs. The National Electricity Regulator of South Africa (NERSA) is expected to play a significant role in helping reduce the current variability of TOU tariffs across all the municipalities. The success of this initiative would help ease its acceptance by end-users. 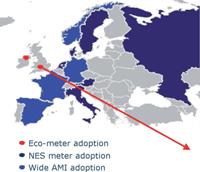 Frost & Sullivan expects this trend to continue as new and more efficient systems such as advanced metering infrastructure (AMI) technologies are currently being rolled out. Advanced metering technologies such as Echelon’s Networked Energy Services Systems (NES), EcoMeter’s In-Home-Display (IHD), OpenWay and Frequency Division Multiple Access (FDMA) are expected to continue being adopted across Europe and North America. The majority of these smart metering systems are scalable systems that allow for the minimisation of cost and complexity while maximising the reliability of grid networks.

Despite this worldwide demand for smart metering technologies, a major challenge to the fast-track implementation of smart meters has remained. The lack of codes and standards for a common architecture, which should provide interoperability and enable various communication technologies to be used by any application, has proved difficult to overcome. This has been compounded by the large deployment of proprietary technologies in several regions.

The need for developing a common standard is paramount, as this would allow the various networks to communicate with each other. The major participants in the South African electricity sector have recognised this and have been engaged in the development of a common standard, the NRS 0491. This development offers hope that a common platform could be found and therefore facilitate the rollout of smart meters in the country. In addition, other challenges such as a lack of R&D funding, the high price of new technologies and the lack of common communication standards are expected to continue in the foreseeable future. 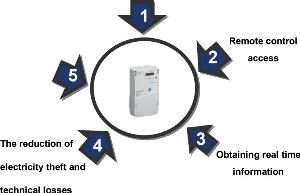 The DSM initiative is the largest current driver behind the expected rollout of smart metering in South Africa. This initiative is being driven by Eskom as a result of the power shortages being experienced in the country. The smart meter component of the DSM project is expected to contribute 35% of the overall aim of reducing consumption by 2,600 MW by 2011. Eskom has put aside R315 million (US$31.5 million) in order to start the rollout of smart meters in 2009.

Remote control access is the second critical benefit of smart meters. This is seen as a means to reduce the manpower needed to monitor equipment. In an environment where cost reduction strategies are paramount, this is welcomed by potential customers that face immense financial constraints. Thin face meters often need to be monitored manually, which results in significant expenditure on labour.

Thirdly, obtaining real time information is also a key benefit to potential customers, most notably municipalities. The municipalities have expressed their frustration with obtaining accurate information from current meters. This is especially true for credit meter customers, where there may be a lag time in billing of up to three months. As a result, customers often receive bills that do not truly reflect their consumption and that may be unexpectedly inflated.

The reduction of electricity theft and technical losses is the fourth benefit to be gained through smart metering. These issues have become paramount in the current electricity crisis in South Africa. For instance, Johannesburg’s City Power had technical losses estimated at about 28% in 2007. Estimates are that 60% of users were bypassing meters and 5% had illegal connections in the Johannesburg area. In addition, the theft of electricity in the prepaid customer environment is on the increase and is resulting in mass losses within peri-urban squatter and low-cost housing settlements.

Finally, the need to replace obsolete metering technology is also expected to drive the rollout of smart meters in South Africa. The majority of residential users have their meters inside their houses. This has made it difficult for municipal personnel to access these meters and therefore to collect the necessary information on consumption patterns etc. 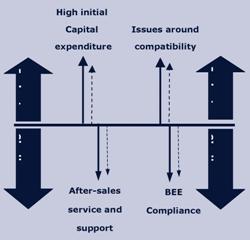 The main challenge facing the majority of the potential customers is the initial capital expenditure. The limited financial capacity of municipalities and even Eskom is a major challenge in South Africa. The difference in price between smart meters and those currently in use is a matter of real concern to the majority of potential customers. On top of this, those implementing smart metering programmes also have to consider the cost of their installation. If the rollout is to start, equipment suppliers will have to develop innovative and cost efficient solutions in order to increase the attractiveness of their product in a relatively competitive market. In addition, finance institutions and government would need to help fund it.

Secondly, long-term product and system compatibility is expected to remain a key challenge to all participants. Although a common standard is being set in NRS 0491, Frost & Sullivan believes that it is highly unlikely that equipment suppliers will be able to meet all the technical specifications set in the document immediately. As a result, some flexibility will need to be offered to equipment suppliers to develop a product that will be able to comply with most of the specifications in the short term.

Ensuring after-sales service and support is the third challenge to equipment manufacturers because of the persistent skills shortage in South Africa. Neither Eskom nor the municipalities currently has the in-house skills to operate the complicated database systems needed to analyse and manage the rollout of smart metering. As a result, equipment suppliers would need to either supply a totally integrated solution with skilled staff to manage and analyse data from the database, or provide training services to Eskom.

CONCLUSION
The South African government is currently pushing towards the introduction of smart metering technologies as they are seen as a means to mitigate the current electricity crisis. In order to align the electricity sector with the current reality of stressed power supply in the country, only end-users that consume 500 kWh and above per month are being targeted for smart meters. This indicates that the expected smart metering rollout will be limited, which is an attempt to respond to municipalities’ concerns about the costs of replacing existing metering technologies.

However, despite the recent extension of the timeframe for the implementation of smart meters and TOU tariffs in South Africa to January 2012, financial restraints in the majority of municipalities may delay this even further.