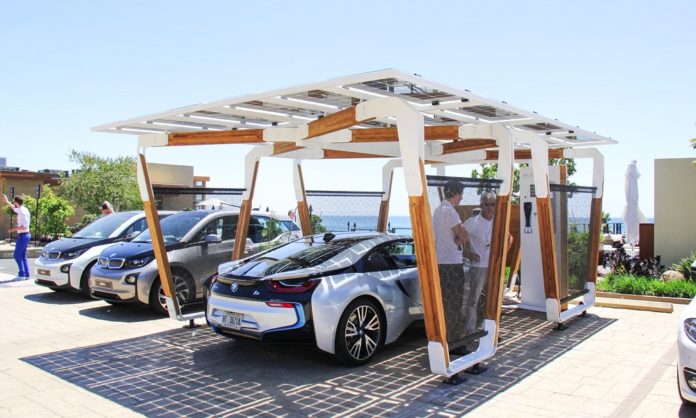 According to a company release, the BMW “i solar carport” supplies an average 3.6KW of solar power at peak on a clear sunny day.

The BMW “i Wallbox” is also used to show a live stream of how much power is being generated by the sun and charge electric and plug-in hybrid BMW models.

Tim Abbott, chief executive officer of BMW Group SA and Sub-Sahara was reported saying: “With the rollout of the BMW i solar carport, the BMW Group is demonstrating its commitment to shaping the future of individual mobility – not only with ground-breaking products and services, but also with the global as well as local involvement in the expansion of home and publicly accessible charging infrastructure for electrically-powered vehicles.”

[quote] BMW South Africa will be expanding installation of the solar carport in major cities including Johannesburg, Cape Town and Durban for public charging.
The carport will also be available to order by customers and fleet companies for home and office charging.
Abbott added: “We have always emphasised that for electric vehicles and plug-in hybrid electric vehicles to be successful, we need to firstly increase consumer confidence in the viability of electric vehicles and secondly make public charging easily accessible for customers who purchase these cars. The rollout of solar carport is also an emphasis on this philosophy.”
Last year, BMW announced that it was Pacific, Gas and Electric’s (PGE) chosen partner in its ChargeForward Programme. The 18-month pilot study was launched to better understand the relationship between home EV charging and the energy grid.
The company invited up to 100 eligible BMW i3 owners, who are also PG&E customers in the San Francisco Bay Area, to participate in the BMW i ChargeForward Programme from July 2015 through December 2016.
According to BMW’s website, the programme also aims to reduce the impact of EV charging on the grid – leading to lower total costs of EV ownership – and also supports integration of renewable energy.
Image credit: www.bmwblog.com