Like many European countries, Sweden has mandated that its electricity utilities provide customers with monthly meter readings, as well as provide meter data to all retailers and customers. E.ON Sverige — Sweden’s largest utility, with more than 1 million electricity, gas, and heating customers — wanted to do more than just comply with the new law. E.ON wanted to implement an efficient process for collecting and verifying meter values. It wanted to create simple, accurate customer invoices and a more efficient process for handling supplier changes and relocations. And it wanted a system that could grow as the company’s needs changed, offering services associated with customer service, grid management, and more.

To save costs and take advantage of a competitive environment, E.ON outsourced the operation of the system to Swedish meter operator Elektrosandberg. This allowed E.ON to focus on core business functions such as asset management, power system operation, and customer service, while Elektrosandberg could focus on operating the advanced metering system and manage IT, communications, resource management, and quality of service. 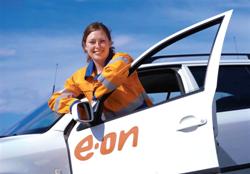 PROJECT RESULTS
Throughout the deployment process, E.ON has been assessing the results. Not only has the system delivered the anticipated cost/benefit return, but the system’s value has increased each year as new benefits have been identified. In 2007, the net benefits increased over 2006 and, while complete year-end results for 2008 are not yet available, they are trending even higher than in 2007.

Beyond these financial benefits, the NES System has had a positive impact in many other areas, including improved customer service, reduced system losses, and increased customer loyalty.

As a result of this strong performance, E.ON has experienced a significant reduction in customer service calls. Between Q1 2007 and Q4 2008, the number of calls for both meter-reading and invoice-related issues dropped by 56 percent. This has let service representatives focus on other tasks and has improved call center efficiency. During the same time period the number of customer meter-related complaints also dropped by about 50 percent, due not only to the elimination of estimated bills but also to the positive impact of accurate and timely meter readings. Reducing customer complaints has increased customer loyalty and has helped improve the results in E.ON’s customer satisfaction surveys.

LOOKING AHEAD
As part of its goal to improve customer service, E.ON plans to integrate outage information produced by the NES System into its SCADA system. And as part of its smart grid development strategy, the company plans to incorporate power quality data from the NES smart meters into the operations of its power system.

In the future, E.ON also plans to expand its smart grid to offer other customer-related services, and incorporate more retail-oriented products and services into the system. “We’ve only tapped a portion of the NES System’s features,” says Pehrsson. “As our needs grow, we’ll take advantage of more advanced ones. And that’s exactly why we chose the NES System: to deliver the initial applications and services we needed, and to provide the platform for desired future value-added services.”