By Gary B. Schaffer

IEC installed those meters for customers who had been disconnected more than once in the past year. There were also the occasional landlords who found it advantageous to put their tenants on prepayment.

Last year the Israeli Regulator for Public Services – Electricity decided that prepayment was a service that the IEC should offer to all its customers, so the following actions were taken:

CORE ISSUES
The core issues were identified as follows

The most important decision was a policy decision: should the management of the prepaid customers be kept in-house? Many utilities involved in prepayment commission their meter supplier to run the entire operation, i.e. manage the customer database, do the vending, collect the revenue and report to the utility. However, IEC decided to keep the customer management in-house, in line with the company policy that all customers are to be managed in the same data system and that minimum information on customers should be entrusted to others. The billing system had been developed in-house, so a 25 man-month programme was embarked on to adjust the IT systems to prepayment.

Secondly, the keypad meter was decided upon. The concept is more secure, operating costs are lower, customers are familiar with keypads, and last but not least, the regulations require vending over the phone, limiting the options. The regulator also dictated dates of ‘nodisconnection’ and since time-of-use tariffs are becoming more widely accepted the answer to the third issue was making the keypad meter smart as well. The meters include a real time clock and other features of convenience, but no cellular modem or other communication device, apart from a short distance transmitter for meters that are located in inaccessible locations. 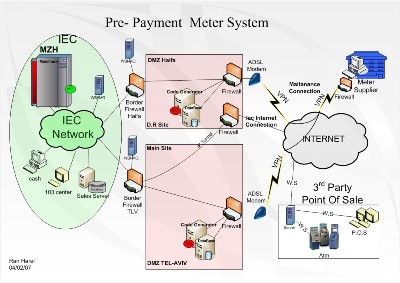 The vending turned out to be a major preoccupation for the project team. About half of the pilot customers use their credit cards over the phone, but the other half can not be expected to travel to the IEC office for their weekly cash purchase. Thus two suppliers of cellular phone air time, with hundreds of outlets in convenience stores and other locations, were contracted. However, for various reasons the success of these was limited and other options including AVMs, ATMs, supermarkets, post office outlets, etc. are being tested.

The project is run by an inter-departmental team with representatives from the marketing division, the distribution districts, the IT group, the metering group and the accounting department. A special Task Force was established to look into the most up-to-date methods of paying utility bills (bill presentment, web service, automatic machines, etc.) and to tie the prepayment into the most advanced systems.

Twenty thousand meters have been ordered and the code generator for the IEC meters will be installed at the IEC computer centre and managed by IEC. Commercial deployment of the system is expected to start before the end of 2007.

Referring back to the core issues, the main stumbling block seems to be the deployment of points of sale (POS). Tax regulations require issuing a VAT receipt for every sale. This complicated the process at the convenience stores as they had to manage two separate cash boxes and made book keeping awkward. As mentioned above IEC is endeavouring to move its business to financial institutions and to tie the prepayment in with the more advanced systems of payment, credit and accounting. Work on the upgraded meters and the code generators is being finalised and testing should take place by the end of August. The cardinal test will be on site, integrating the code generator with the billing system, to take place in October.

SPECIAL RATES FOR LOW INCOME CUSTOMERS
The issue of rates for low income customers is gathering momentum in many countries. Under the heading of ‘social tariffs’ comes the assumption that access to the use of electricity is a basic human right, just like shelter or education. When the idea was advocated in the Knesset (the Israeli Parliament) IEC suggested the use of a prepayment meter (an idea already being implemented in Hungary). The Social Security Offices (SSO) would be equipped with IT systems tying them to IEC’s prepayment system. The SSO, after verifying the customer’s entitlement, would issue the code for the prepayment meter, according to the weekly or monthly allowance of the customer. Any additional amount of electricity required by the customer would be purchased directly by him from IEC. The code issued by the SSO would be part of the welfare package that the low income customer is entitled to and accounts would be settled between the SSO and IEC. In this system the responsibility for managing the welfare aspect rests with the SSO and the responsibility and accountability for the supply on the utility.

However, the legislators decided that time and consumption dependent rates would be developed, and the SSO will transfer to the IEC the lists of customers entitled to various reduced rates and the expense will be borne by all IEC’s customers.

A FINAL NOTE
There is no doubt in IEC that prepayment is a viable concept for the Israeli culture. Domestic customers pay-as-they-go for all their consumption, whether food, clothing or travel. The periodic utility bill is a problem for many households. With prepayment the consumer has the power and the mere fact that purchasing is under better control has proven to save around 10 to 13 percent of the usual consumption. In Israel a 10 percent penetration of prepaid meters is expected within the next few years, minimising debt and disconnection for customers and saving on fuel and operating expenses for the utility.

The US expands energy storage capacity deployment by 162%