In the last few years, the market for three phase meters began to evolve quite radically. It is not confined any more to measuring only the total active power and displaying the corresponding energy with an electromechanical counter. Now a meter must measure the total active and reactive powers with increased bandwidth, accuracy and over an extended dynamic range. RMS (Root Mean Square) values of phase voltages and currents are commonly required. The fundamental component of the powers and the power factor must also be measured to help the utility in analyzing the load. Detecting and countering various tamper attempts is another requirement. Everything must be visualized on an LCD display. 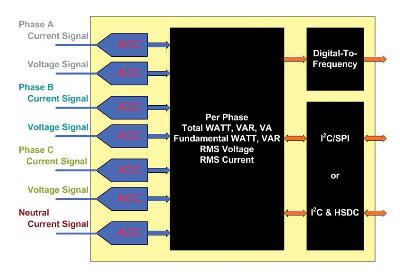 ACTIVE AND REACTIVE POWERS
We all know the expression of active power when no harmonics are involved:P=U•I•cosφ. But in real life, harmonics are present and so the utility needs to measure them. The active power that contains both the fundamental and the harmonics (P=∑UÐº•IÐº•cosφÐº ) is called total active power.

In a similar way, the total reactive power is Q=∑UÐº•IÐº•sinφÐº. The ADE7878 computes both total active and reactive powers on each phase with a bandwidth of 4KHz and an accuracy that varies from 0.1% over a 1000:1 dynamic range to 0.2% over a 3,000:1 dynamic range (see Figure 2) . Such an extended dynamic range helps manufacturers to produce meters with various current ranges using only one hardware platform, significantly reducing the costs.

The total reactive power has always been difficult to compute. One method calls for introducing a time delay in the current. Another uses a phase shift filter to rotate the current by 90O. The first method is not sufficiently accurate, while the second method had a high attenuation at frequencies higher than the fundamental and therefore the measured reactive power was essentially the power consumed by the fundamental component. Using a new algorithm subject to a patent application, the ADE7878 computes the total reactive power across the 4KHz bandwidth. 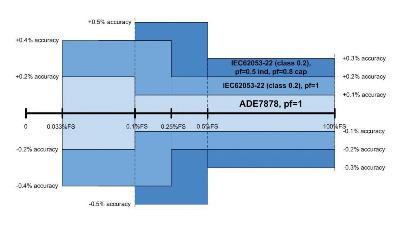 RMS VOLTAGES AND CURRENTS
The ADE7878’s fixed function DSP computes the RMS values of every phase voltage and current of the system. The RMS of the neutral line is also computed. The ADE7878 computes them with 0.1% accuracy over a 1000:1 dynamic range.

The way to compute the RMS is simple: square the voltage or the current, low pass filter it, take the square root of the result and here is the RMS. The problem is that the input signal always contains noise introduced by the system or by the ADC (Analog to Digital Converter) itself. The noise is squared along with the regular signal and therefore affects the validity of the final RMS result, especially when the input signals are small, for example around 0.1% of the full scale.

How can we obtain an RMS value stripped of the noise influence? We cannot physically eliminate the noise, so we have to find mathematical ways to eliminate its influence. If we assume that the noise in the system is constant, sufficiently small and independent of the input signal magnitude, the error appears as an offset and eliminating an offset is mathematically simple inside a DSP. The key is to find an approach that eliminates the offset for small signals around 0.1% of full scale, and in the same time, does not affect the accuracy of the results for signals where the noise does not have any influence, beginning at 1% of full scale. After testing multiple approaches, we found the best offset compensation is done inside the square root. This method, showed in Figure 3, works much better than a classical offset compensation that would have subtracted a value from the square root output.

DETECTING TAMPER ATTACKS AND COUNTERING THEM
Every utility has its own approach in dealing with defects or tamper attacks. Some meter specifications only require registering the time a tamper attack has happened. Others require the energy be accumulated independent of the attack. The ADE7878 tries to identify the moment in which an attack occurs and to provide the best methodology for countering it. In the next few paragraphs, these features are presented together with some situations in which they become important.

In 3 phase 4 wires systems, the ADE7878 measures the neutral current and calculates its RMS values continuously. We know that the sum of phase currents is always equal to the neutral current. If these two quantities are not equal, then something is wrong: someone could have tampered with one current transformer or with a phase line. To help identify this moment, the ADE7878 compares the instantaneous value of the neutral current with the sum of phase currents and if they differ by a specific amount chosen by the user, an interrupt is triggered. This interrupt can be used by the MCU to register the tamper attack.

An important measurement in three phase systems is the detection of the time at which the phase voltages cross the 0V line. These instances are called zero crossings. The order in which zero crossings occur is always the same, so if someone connects the meter in a wrong way, the order changes and this can be a tamper indication. The ADE7878 continuously observes the succession of the zero crossings and if their order is not correct, an interrupt is generated.

An extreme tamper condition occurs when all connections to the phase voltage inputs to the meter are cut and as a consequence, the power supply to the meter board disappears. The current still flows through the system, energy is still consumed, but because the metering IC is not powered, no energy is computed and accumulated in the meter. Usually, the approach to this problem was to create an alternative power supply for the meter from the phase currents and in this way continue to have the meter functional. The ADE7878 offers another approach, similar to one used in single phase meters: when the power supply is shut down, the meter continues to be supplied from a battery and periodical RMS measurements of phase currents are executed. These RMS values are then multiplied with nominal RMS voltages and provide an apparent power estimate of the load consumption. This apparent power may be used as an estimation of the power consumed during this event.

Specifically, the ADE7878 provides 3 separate low power modes PSM1, PSM2 and PSM3 besides the normal mode, PSM0. When the power supply goes down, the ADE7878 is practically shut down in the sleep mode, PSM3. The current consumption at room temperatures is less than 1µA. Every couple of minutes, the MCU wakes up the ADE7878 in low power mode, PSM2. In this mode, the device senses the currents and compares them against a threshold, trying to understand if there is current consumption or not. A different interrupt is triggered in each case.

Let’s say no current consumption has been identified. This means the power supply went down because all 3 phase voltages went down, a possible, even if undesired event. This is not a tamper attack, so the MCU shuts down the ADE7878 back in PSM3 because there is no power consumed by the load. But let’s say current consumption is identified. This is a tamper attack, so the MCU turns the ADE7878 in PSM1, the reduced power mode. In this mode, the mean absolute value of all three phase currents is computed. This measurement is a good approximation of the RMS value if no harmonics are present and it can be multiplied inside the MCU with the estimated voltage to provide an apparent power estimate. The MCU then integrates it as the estimated apparent power consumed by the load during this period. When the measurement is obtained, the MCU shuts down ADE7878 back in PSM3, the sleep mode, and the entire cycle is repeated every couple of minutes.